3 - The beers from maize, cassava and sweet potato. 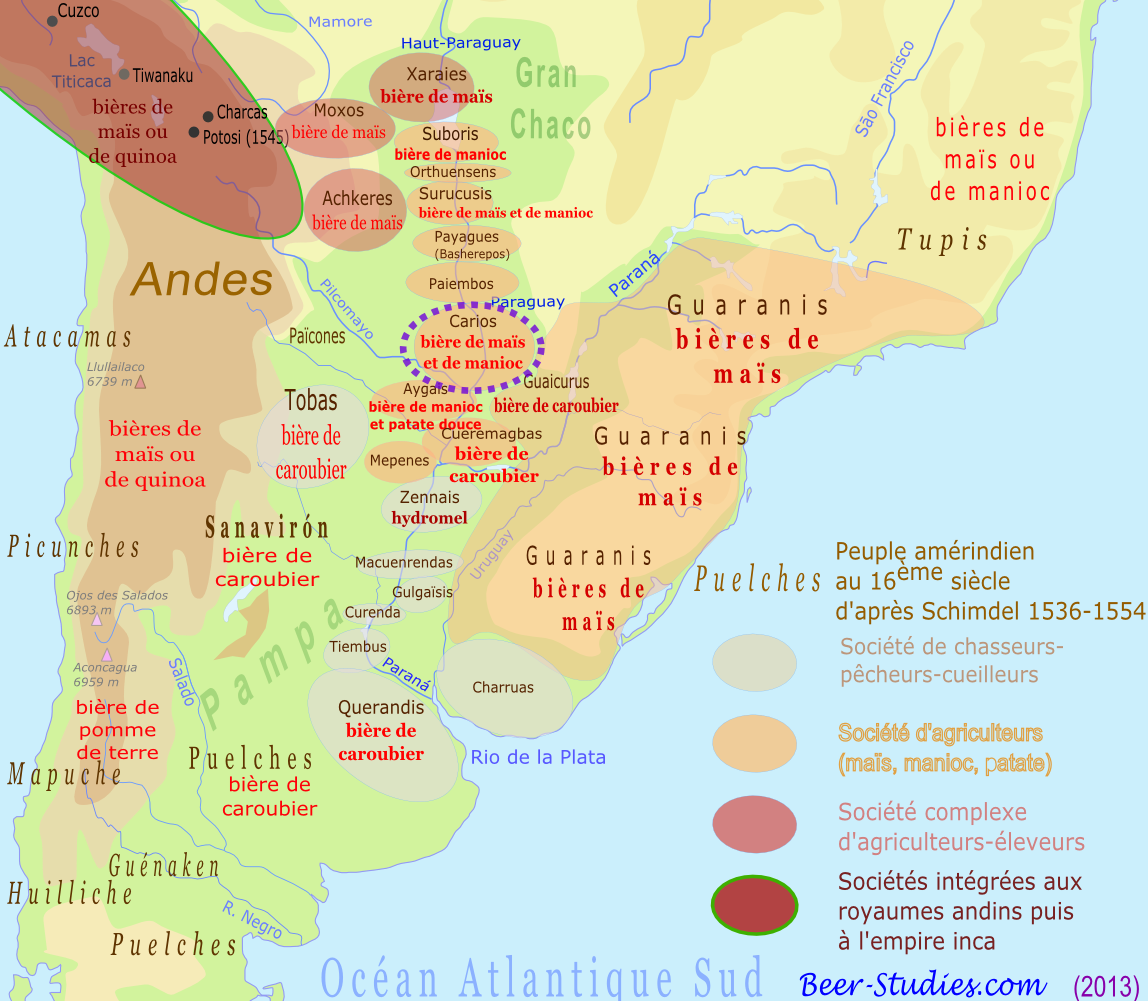 « After being forced to leave this nation, we arrived among the Carios, who live fifty thousand miles away from the Aygais[1]. There we found, thanks be to God, and as we had been told, provisions in abundance, Turkish wheat or maize, sweet potatoes, roots that resemble apples and have about the same taste; other roots called mandioch pobior, which have a taste of chestnut. The Carios make wine [beer] with the mandeboere [manioc]: they also have meat, fish, deer, wild boar, ostriches, local sheep, almost as big as our mules, chickens, goats and rabbits. There is a lot of cotton, and honey with which the inhabitants prepare a fermented beverage. » (Schmidel, Chap. XX, Des Indiens Carios, 85-86)

This concise picture of the Carios Amerindian way of life depicts an opulent society whose diet is based, alongside hunting and fishing, on the growing of maize, cassava and sweet potatoes. These three plants provide them with enough to brew beer all year round. It is assumed that the social life of the Carios reserves a central place for fermented beverages, and gives them a very high symbolic significance. Unfortunately, neither Schmidel nor the other witnesses to these early contacts will see any point in describing anything other than the body appearances, ways of fighting or diet of the native Americans. 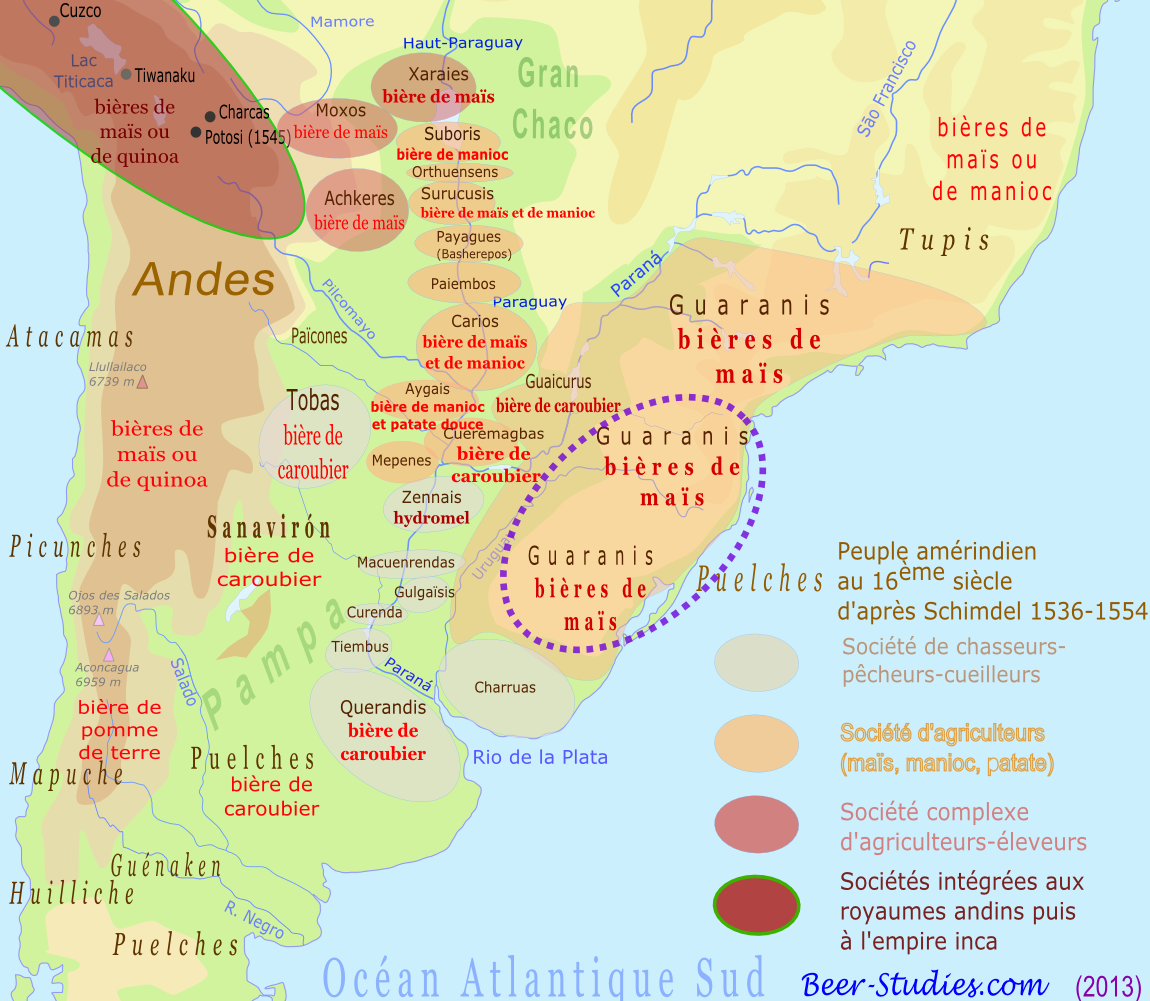 About the Guaranis and their neighbours who occupied a vast area between the Atlantic coast and the river Paraguay, we do have descriptions of Alvar Nuñez who crossed their territory in 1541 by land. Unable to land with his 400 soldiers in the bay of the Rio de la Plata, considered too dangerous since the destruction of the camp of Buenos Ayres, the governor landed on the island of Saint Catherine (now the Brazilian province of Santa Catarina), and then on the coast in order to reach the city of Asunción on the Paraguay River by land. He had to cross the Guaraní territory from east to west. His account corroborates Schmidel's account. The Guarani form a large population divided into ethnic groups but united by a common language and a very similar way of life. Their economic prosperity is based half on the cultivation of maize (2 harvests a year), manioc and sweet potatoes, and half on gathering and hunting.

« This nation is called Guarani, they are ploughmen who, twice a year, sow maize. They also cultivate caçabi [cassabi = manioc] : they raise chickens and geese in the manner of Spain. They have many parrots in their homes. They occupy a large area of land, and all of them form an alliance. » (Commentaires d'Alvar Núnez, 50)

The Guaranis have an abundance of raw material for brewing various kinds of beer. But this material basis would not be enough to make them a people of brewers if their mores did not involve numerous festivals accompanied by ritual sharing of food and drink. Making and drinking beer are at the heart of their customs.

About these same Guaranis that the Portuguese call Tupinamba, Schmidel notes during his return trip (see map) by the north of the Rio de la Plata in the year 1553:

« They spend days and nights getting drunk and eating good food: they love dancing. In a word, they lead a life so wild and epicurean that it is difficult to express or describe: they are proud, arrogant and insolent. [corn] a fermented beverage [beer], of which they get drunk as if it was the best wine. They speak the same language as the Carios, with very little difference. » (Schmidel, Chap. LII, Ulrich Schmidel quitte le rio Parana, et continue son voyage par terre. Ce qui lui arrive chez les Toupins [Tupis / Guaranis]. 240-241)

This is how Alvar Núnez, his Indian porters, 250 soldiers, crossbowmen and harquebusiers, two Franciscan monks and 26 horses will be able to cross forests and rivers to Asunción (1000 km as the crow flies), fed and watered in all the Guaraní villages they cross:

« We spent a long time crossing these forests that were so dense that we could not see the sky. On the 19th [December 1541] we reached a village of guaranis. These Indians, their chief, women and children came to two places to meet the Spaniards, carrying food, chickens, geese, honey, maize, potatoes, other fruits and pine cone flour, of which they prepared a great quantity. » (Commentaires d'Alvar Núnez, 62)

It is not said if the Indians Guaranis also knew how to make beer with pine cone flour.