A history of African beer south of Lake Chad

African beer in the Chadian basin since the 11th century.

A 134-page, highly illustrated study of traditional African beers, the ingredients and brewing techniques, and the confrontation between the pantheistic ethnic groups of North Cameroon and the Islamic kingdoms (Bornou, Kanem, Wandala, Baguirmi, Caliphate of Sokoto, etc)..

This part of Africa has an eventful and documented history since the 11th century. This outstanding background enables us to trace a fairly complete history of traditional African brewing, freed from the colonial gaze and based on written documents and African testimonies (oral traditions). This history highlights a thousand-year-old confrontation between two antagonistic socio-political systems. The system of the Chadian basin ethnic groups is based on cereals, self-sufficient food production, flat social structures, and beer as a beverage of social cohesion, rituals and annual collective ceremonies. Conversely, the Islamised kingdoms, predatory by their very nature, are based on 'pagan' peoples enslavement, the trans-Saharan slave trade and centralised political powers.

This study explores the following issues :

This study about beer focuses on an African area encompassing northern Nigeria, Cameroon and north-western Chad, i.e. the basin once filled by the gigantic Lake Chad or mega-Chad. The beer under discussion has been brewed on African ground for several millennia, long before the industrial version that was introduced to Africa with European colonisation, the one we commonly drink today in this part of Africa. Traditional African beer has been for a very long time, and still is, part of the political economy of African societies in the Chadian basin.

This leads us to a second statement: the traditional African brewing get its own history. The phrase refers to all the technical knowledge, social and religious practices that specifically involve beer. The traditional (or autochthonous) African beer cannot be reduced to brewing skills, nor even to manners of drinking. It permeates vast areas of collective life: the religious sphere, the political field, the economic exchanges, the social structures, etc. African brewing traditions are as evolving and polymorphous as the other facets of African social history. African beer has as much credentials as Western beer and deserves to have its history written down: a formidable project undertaken by African specialists since the 1980s.

Why the Chadian basin? From the point of view of African history, this region can be compared to the Niger Basin, to Eastern Africa (Ethiopia, Sudan) or to the Great Lakes (Uganda, Rwanda, Burundi, Northern Tanzania) (General history of Africa, IV). All these regions, where the ancestral presence of beer and a rich socio-political past are combined, call for a study of their brewing traditions. The Chadian basin has inherited a turbulent geopolitical history dating back to the 11th century, punctuated by the foundation of more or less perennial kingdoms, by the confrontation between pantheistic and Islamic populations, against a backdrop of far-reaching technical, social and political developments3. This historical depth has generated a rich documentation of African origin since the 16th century (Ahmed-Baba, Tarikh el-fettach, Tarikh es-Soudan, Ibn Furtu, Chronicles of Bornu, ...) and in the 18-19th century (Usman dan Fodio, Bello, ...), then colonial (Denham, Barth, Clapperton, ...). Since the 20th century, it has given rise to an in-depth study of this African region, its history, geopolitics and ethnology.

Beer is one of the common themes linking the complex and very different societies of the Chadian basin over the long term. Its history raises pivotal issues: the evolution of cultivated plants, the geopolitics of this African area, the migration of peoples, techniques and ideas, the thousand-year-old confrontation between pantheistic and Islamic societies. The question of fermented beverages stands at the heart of these evolutions and age-old conflicts, especially the main one, beer. It crystallises critical political and economic issues for peoples who feed mainly on the cereals from which beer is brewed.

In Africa as elsewhere, beer embodies three major dimensions of human history: technological, socio-economic and religious. The brewing traditions of the Chadian basin are based upon these three fundamentals. No beer without starch. Cereal growing, brewing techniques and social organisations make up the backbone of an African beer civilisation. The social economy of beer cannot be understood without the omnipresence of cereals and other starchy sources, whether cultivated or wild (chap. 3), without food techniques (chap. 4), social structures (chap. 5), festive logics, and ultimately beliefs and one of their main material supports, namely beer (festive drunkenness, ritual libations, agrarian ceremonies linked to agricultural cycle of the grains, beer offering to the ancestors, etc.) (chap. 6, 7 and 8).

The major political trends in this region since the 11th century have been marked by the structural confrontation between abstinent Islamic elites and beer-brewing pantheistic peoples. Over the centuries, the issue of fermented beverages, mainly beer, has become a conflictual one. It sealed a more radical divorce between the productive economy of the pantheists and the predatory economy of the Muslims and its institutionalised slave system. The cleavage between beer and milk reflects the tragedy that has ravaged Africa for more than a millennium: the hunting of 'pagan' slaves. This study sheds light on the political economy that has had a lasting impact on the history of beer in Sudanic Africa since the 11th century.

An archaeology of beer in the Chadian basin is sketched out thanks to the studies of specialists of this region. They describe the social economy of beer among two groups of populations: those of the Mandara Mountains and those of the south-eastern floodplain (Diamaré). Both ecosystems have provided shelters from slave raids, but also a promised land for inventive farmers whose cultural beverage was - and still is - beer.

To conclude on a long-term historical phenomenon, migrants, most of whom were pantheists, fled in waves southwards to escape the slave raids carried out in the Sudanian zone by the Islamised kingdoms (chap. 10). They encountered new plants (maize, cassava, sweet potato), new brewing techniques, new ecosystems (the dry forest and then the tropical wet forest further south), more stratified social organisations (Bamoun and Kwararafa kingdoms, Bamileke chiefdoms). To the south of the Chadian basin, these migrations have overturned or adopted local brewing traditions. On a wider scale, the geography of beer in a vast area encompassing Central Cameroon + Southern Chad + Central Africa has constantly been reconfigured between cereal beers and tuber beers to invent new brewing methods. These technical evolutions reflect the great social changes that have taken place over the last three centuries in this part of Africa.

Gallery of 18 images illustrating the study of African brewing in the Chadian basin. Some of them are protected by the authors' copyright. 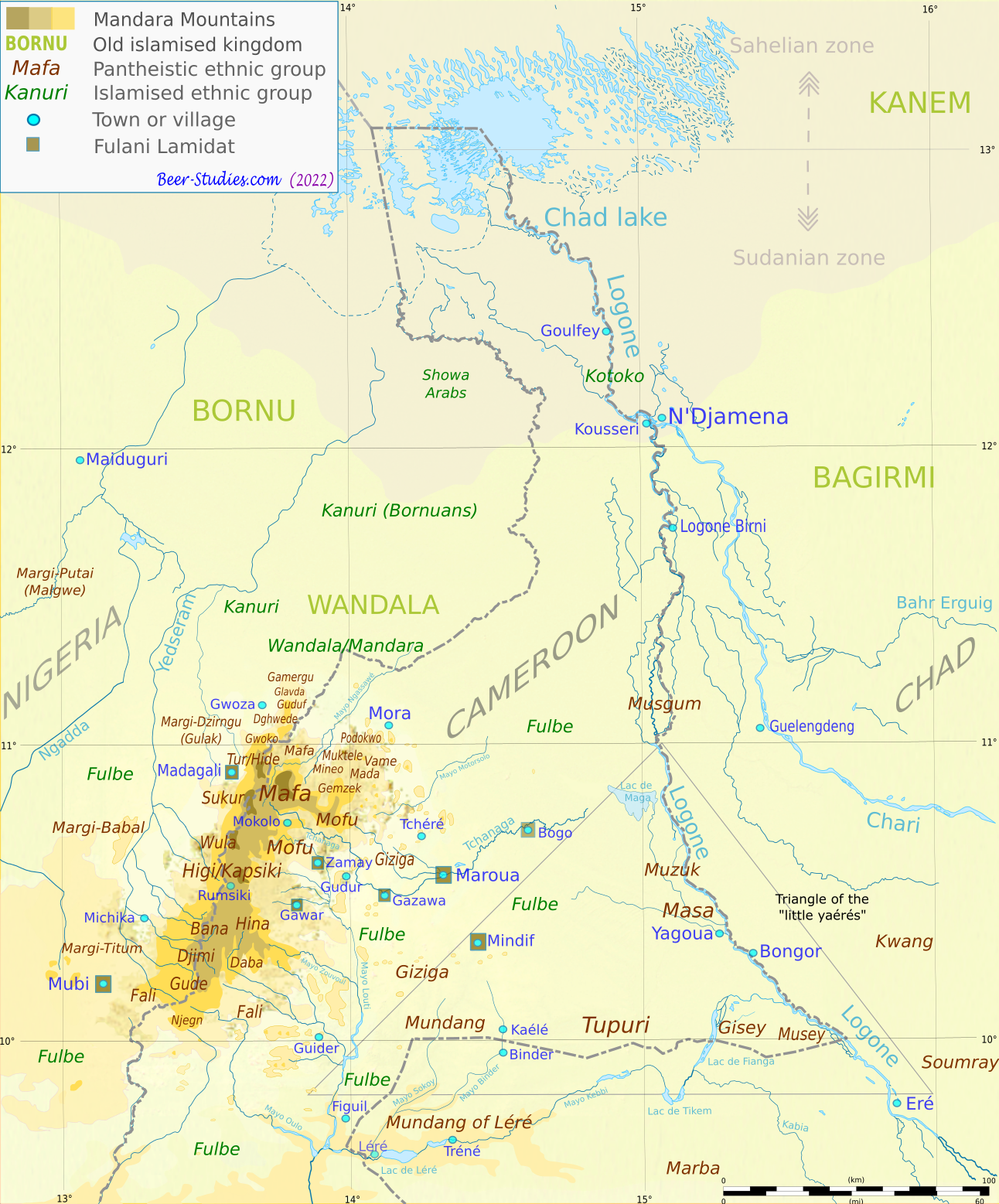 Pantheistic and Islamised ethnic groups living in north-eastern Nigeria, the far north of Cameroon and western Chad, with details of the ethnic groups of the Mandara Mountains. Not all are shown.

Historical geography of beer in Sahelian and Sudanese Africa in the 18th and 19th centuries. Map of traditional beer types from Ethiopia to West Africa. These beers are closely related to the historical refuge areas (usually mountains), home to ethnic groups threatened by the slave raids of the Islamic kingdoms of the lowlands. 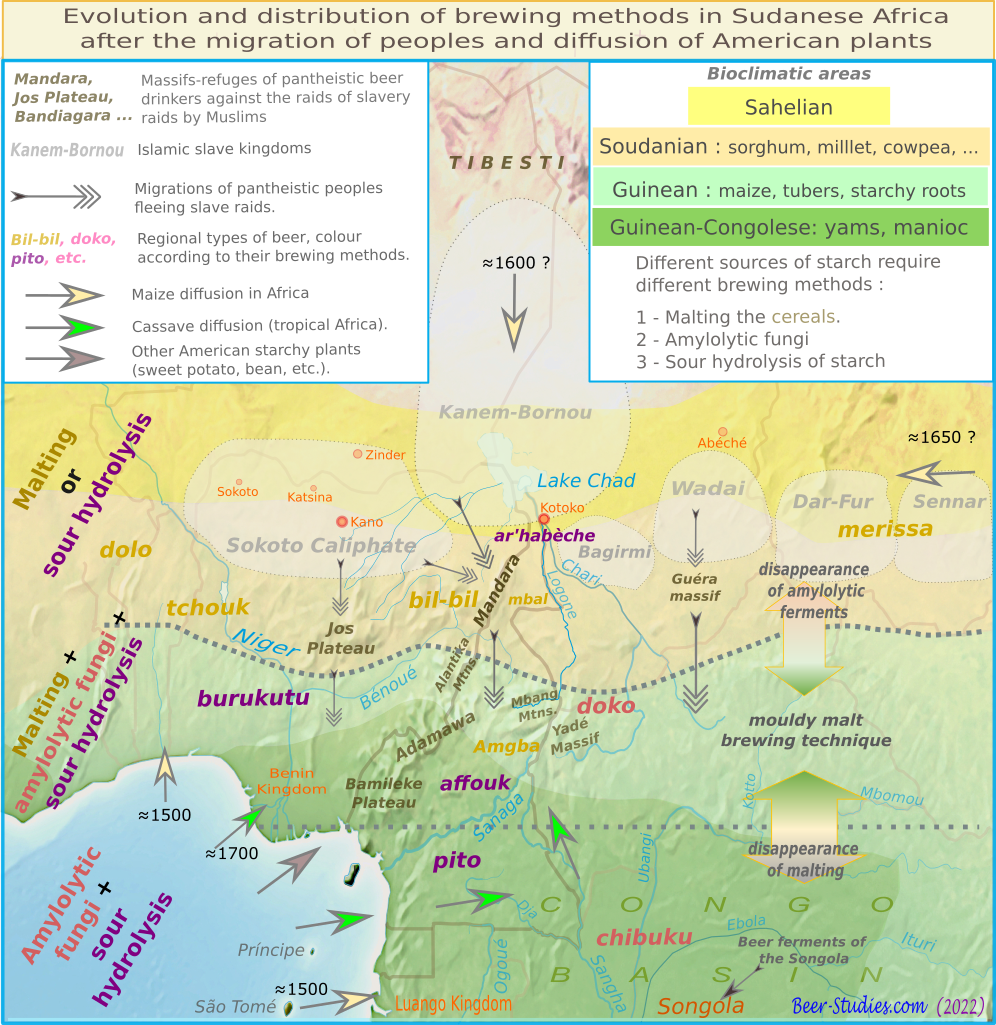 Evolution and distribution of brewing methods in Sudanese Africa after the migration of Sudanese peoples to the southern tropical zone and the diffusion of American plants from 1500 onwards (maize, cassava, sweet potato, etc.).
Furdu beer market, Roumsiki in Kapsiki country, 1995. Furdu is a barely fermented sorghum porridge consumed warm or hot. ©Seignobos 2017.
Kapsiki. A child drinking beer next to a mother or elder sister at the market in Mogodé, April 1986. ©Van Beek 2005.
Child from the Tupuri ethnic group (North Cameroon) drinking beer in the middle of beer jars. ©Garine 2001.
Kapsiki. Funeral ceremony and sharing of the beer after the burial. ©Van Beek 2005.
The Prince of Wazang offers a calabash of beer. ©Vincent 1991.
Beer ritually consumed by all, elders and children (Musey ethnic group on the banks of the river Logone). ©Garine 2001.
Mafa ethnic group - Beer calabash given with the left hand during the zom bay ritual (beer of great ones) after the offerings of beer to the ancestors (zom baba). ©Müller-Kosack 2003.
Mafa ethnic group - Women sharing beer in the zom baba (beer for ancestor) ritual after offerings and prayers to the family ancestors. ©Müller-Kosack 2003.
Mafa ethnic group - The annual beer offering by the biy dza (chief of a major Mafa lineage) on the sacred rock of Zlama, his Mafa community in the centre of the Mandara Mountains. ©Müller-Kosack 2003.
Drying of sprouted sorghum spread out in the sun (foreground), brewing equipment on the right. Brewing technique typical of bil-bil beers from North Cameroon and the Chadian basin generally.
Brewing by decoction with 1 mash. On the right, a dregs filter. Woman brewer from Mbaya country in central Cameroon. ©Chevassus-Agnès & al. 1976.
Different types of filters used by the ethnic groups of central Cameroon to brew (separation of spent grain, dregs) and clarify beer. ©Chevassus-Agnès & al. 1976
Sorghum beer in Rumsiki, Mandara Mountains, North West Cameroon. The market in Rumsiki is very crowded with the Kapsiki and neighbouring ethnic groups.
Paul Eguchi drinks beer lip to lip in the same calabash (solo-solo) among the Hide (Xde) in 1975. ©Eguchi 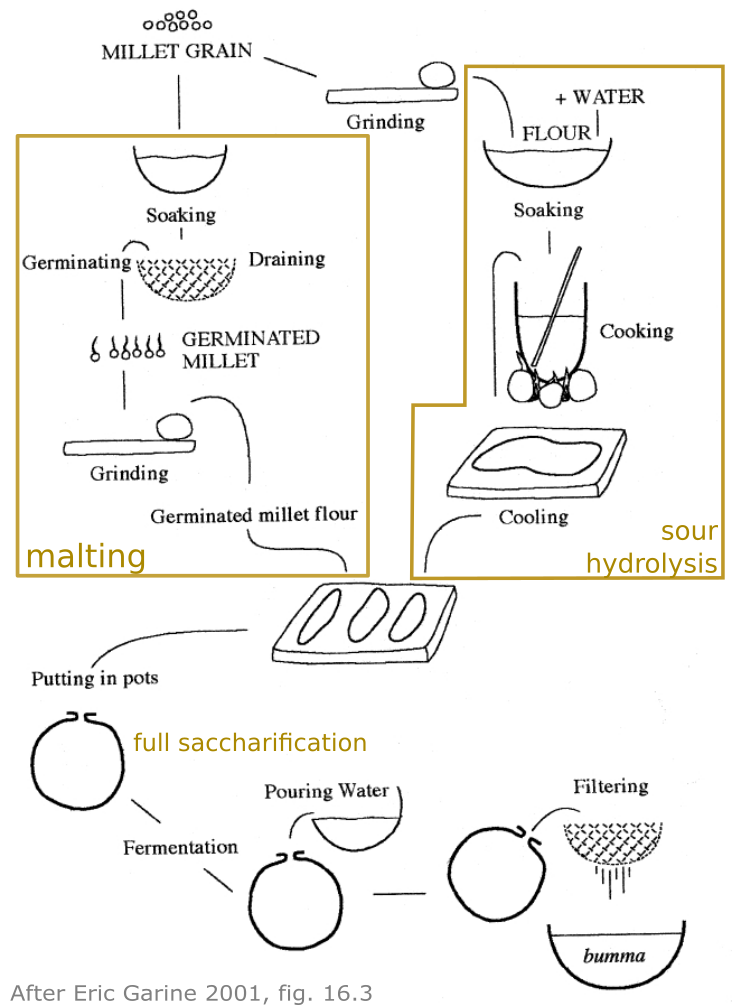 Double process for brewing bumma, a sorghum beer made by the Duupa of North Cameroon: malting and sour hydrolysis. ©Garine 2001.

End of the gallery