Examples abound of myths about beer and the fortunes or misfortunes that mankind receives from it. Beer is given or conceded to humans by generous gods, or on the contrary jealous of their divine drink, or by a legendary female brewer. As far as we can summarise and compare such a wealth of past stories and mythological tales, several themes stand out:

These various themes, which are sometimes complementary, do not have the same meaning or scope depending on whether they are developed by peoples with non-authoritarian social structures or by hierarchical and complex societies.

For the former, beer takes them from the wilderness to social life. It occurs in the human world thanks to the generosity or sacrifice of a male or female ancestor. Beer is the vehicle of the shaman or healer to reach the other side of the world. A few drops of beer are thrown to honour an ancestor or divine power before tasting a new brew. Nothing more. These beliefs and ritual ordinary practices belong to the so-called "tribal" or no-state societies. These myths abound in the Amazon and among Andean cultures, but also in Africa and Asia.

For the latter, the gift or the invention of beer legitimises a political power which is then responsible for redistributing this benefit among men. Beer offerings reinforce this political authority by allowing the king or the priest to officiate in a palace or a temple, and to arrogate for himself a privileged communication with the gods. The beer brewing becomes, after a long economic and social evolution, a material support for centralizing political powers of kingdom or empire kinds.This is the case of the strongly hierarchical societies which appeared during antiquity in Mesopotamia, Egypt, India and China. All of them gave rise to long lasting beer-making traditions. Some of them are several thousand years old.

Between these two extreme poles, multifaceted political and social structures have altered the role of the brewery and inspired the "historical inventions" of beer narrated by some mythologies.

The annual festival of Sekhmet/Hathor in Egypt.

The myth first. We know it from the "Book of the Cow of Heaven" told in New Kingdom tombs. But it has its source in a tradition that goes back to the Old Kingdom of Egypt. Creator of the world and the human race, Ra-Atum is angered by the misconduct of humans revolting against his authority and decides to annihilate them. This myth evokes a historical event: the war that established the Middle Kingdom around 2033 BC. The pharaoh of Upper Egypt Montouhotep II  takes control of Lower Egypt, which had become independent in the preceding centuries. This war lasts 28 years and causes many victims. The reunification will be presented by the victors as the duly chastened revolt of the people of Lower Egypt against the quasi-divine authority of Pharaoh, likened to the god Ra.

Anger thus seizes Ra (or Pharaoh). His creative "eye" becomes a uraeus of fire that sets the world ablaze, a kind of burning sun. This Egyptian memory has been linked to the depths of time and the global warming that hit northern Africa about 6,000 years ago, turning the green African plains into arid deserts dotted with a few oases. An obvious anachronism! 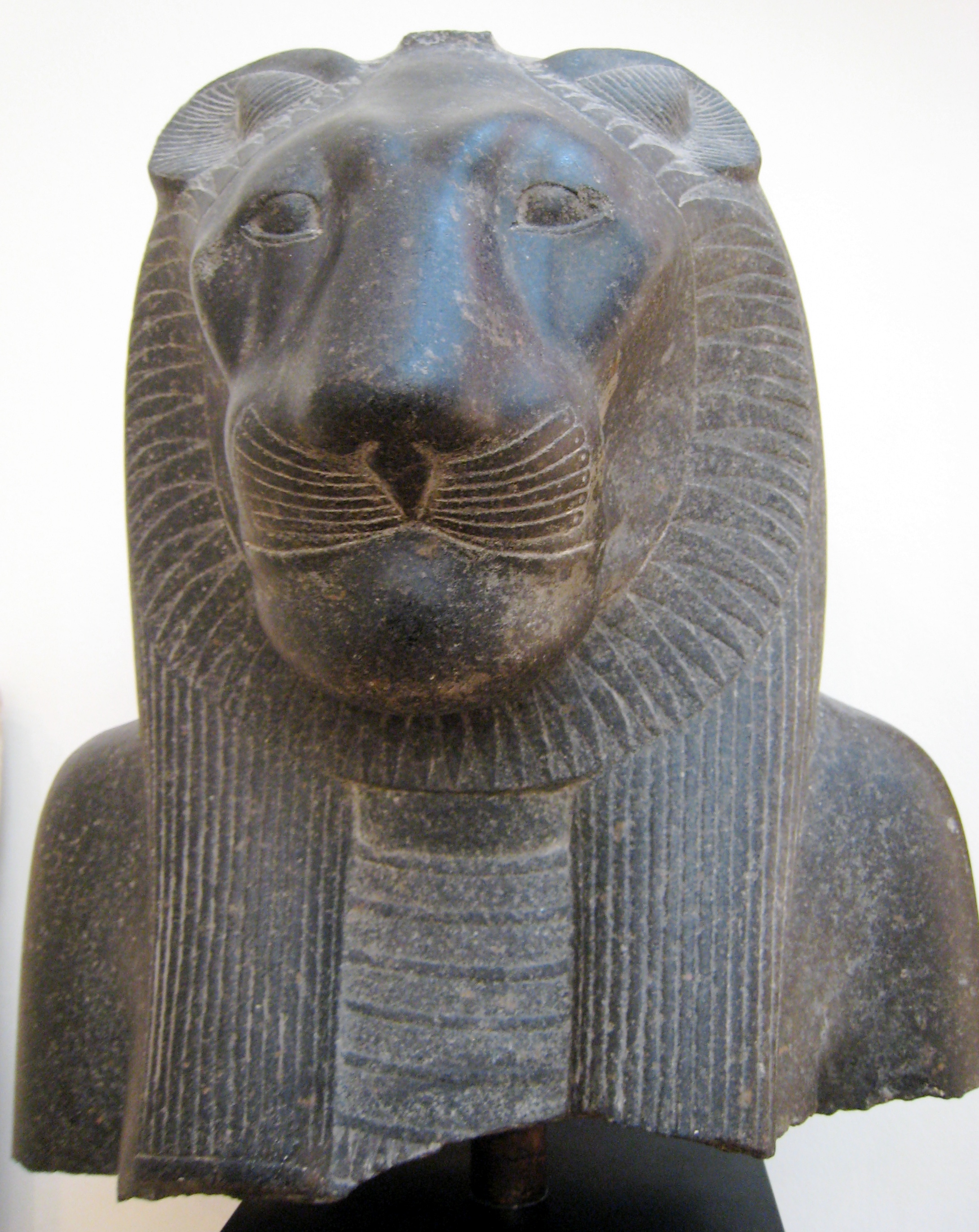 In order not to destroy creation and all that lives, grows or breathes, but to annihilate only the human race that is the object of his wrath, Ra-Atum gives form to a lioness charged with devouring the humans on earth. Sekhmet, the mighty Lioness, accomplishes her task. But gradually turned drunk with blood and overhelmed by a destructive madness, Sekhmet the Lioness becomes out of control. The whole of creation is in danger of annihilation. Ra orders Sekhmet to reach the South (Nubia/Sudan?) where her ravages continue[1].

Thirsty for human blood, the Lioness escapes her creator.

Djehouti brews as much beer as he can, with date juice added to make it more alcoholic. The beer is poured into a pool filled with water reddened with ochre to imitate the colour of blood. Drunk with fury, Sekhmet the bloodthirsty goddess drinks all the beer. She staggers and falls asleep, overcome by alcoholic intoxication. When she wakes up, her destructive fury is forgotten. Rê-Atoum, victorious over himself (Sekhmet is his own substance), metamorphoses his Eye: the devouring Lioness becomes Hathor, radiant divinity of festivities and love. The dual deity Sekhmet/Hathor is a very ancient deity. Hathor already appears on the Narmer Palette, a royal document dating back to 3300 BC. In the lower front register, the king takes on the appearance of a bull that breaks down the walls of a city and defeats an enemy. The king is also called in Egypt the Bull of his Mother, to signify that the people of Upper and Lower Egypt were born of a cow, Hathor in this case.

In other words, for the ancient Egyptians, the Nile Valley was populated or conquered in time immemorial when an angry, bloodthirsty Lioness was transformed into a benevolent and fertile Cow by the magic of red beer.

From earliest antiquity, the temples of the valley have celebrated every year around 19 July the return of the waters of the Nile, the flood personified by Hâpy. At this season, Hathor-the-generous succeeded Sekhmet-the-burning of June-July. This ceremony is called "appeasement of the burning heat" or "appeasement of Sekhmet-the-Powerful". For her, a beer with red ochre is prepared in the breweries of the temples of Egypt.

This is one of the rare occasions when religious celebrations are not confined to the temples. The whole population participates in the festivities: songs, dances, unlimited beer and sexual licence. No one can dissent without angering the fierce Sekhmet or the gentle Hathor, Lady of drunkenness, music and love.

A variant draws a plant (reed, water lily, rye grass?) which takes the place of the beer jar.

In honour of Hathor, the Egyptians of the New Kingdom (1500 to 1000 BC) celebrate a 15-day festival each year at Denderah and Edfu. Beer is drunk without limit and inebriation is the order of the day, to commemorate the drunkenness of Sekhmet, Hathor in her furious Lioness form [2].

Enlil and the banquet of the gods in Mesopotamia.

In a similar vein, Enki, the technician and wise god of Mesopotamia, visits his father, the all-powerful god Enlil, in his city of Nippur, on the banks of the Euphrates in lower Mesopotamia. The text belongs to the Paleobabylonian period (beginning of the 2nd millennium BC) :

From line 96 to 120 (the underlined words have been purposely left untranslated by Al-Fouadi, as their meaning is unknown except mots of them refer to vessels because of the prefix dug-):

« To Nippur he directed his step alone,
Into Gigunna, the shrine Nippur, he entered,
Enki stepped forward (to make) the beer (kaš-kaš-e)[3], (to prepare) the fine beer (kurún-kurún-e),
Into big bronze containers he poured out the fine beer (kurún),
At the same time, he mixed the emmer-wheat beer (ulušin),
In the kukurru-container he brewed (mixed) its bran-mash (duh-bi) for a good beer,
(Then by adding) the syrup of the dates into its (the container's) mouth, he made it (beer) of excellent quality,
(After) its (container's) bran-mash (duh-bi) became a syrupy substance, he spread all of it out to cool off.
Enki, in the shrine Nippur,
For Enlil, his father, made a banquet,
He seated An on a lofty place,
Next to An he seated Enlil,
Nintu he seated at a 'big side'.
The Annuna seated themselves.
(Then) the (divine waiters) gave the beer to drink (as well as) the fine beer which they have sweetened,
The zabar-MIR vessels (gobelets ?), they (the divine waiters) made enormously large.
(Meanwhile) they (the assembled gods) made Uraš hold a contest over the bronze objects.
They (the divine waiters) made the tilimda-vessels shine (like) the holy magur-boat,
(Then) after the beer has been prepared, the fine beer has been sweetened,
After ..... from the house,
In Nippur they made Enlil happy,
(Then) Enlil says to the Anunnaki :
You Annuna, who came straight to the assembly,
My son has built a house, the king Enki, ... » [4]

Note that there are at least two types of beer (kaš and kurún), perhaps a third based on starch wheat (ulušin). They are sweetened and strengthened with dates. The text may also describe the technical mixture of the first two (supposedly barley beer) with starch wheat. Spreading the mash (duh-bi) to cool it remains a technical gesture difficult to understand for brewing beer. You may want to cool the wort, which is liquid, so after filtration of the semi-solid mash.

[4]  Al-Fouadi Abdul-Hadi 1969, Enki's Journey to Nippur : the Journeys of the Gods, for the English translation. Its slightly diifers from that proposed by Jean Bottéro 1989, Lorsque les dieux faisaient l'homme. Mythologie mésopotamienne, pp 145-146, [94-121].