Dogon cabaret. The beer bars of Dogon country.Article 5 of 5

II. The bars of the Dogon country (continued)

If the village cabarets are places of conviviality where the speech circulates freely transcending the individual statuses, it is not the same in the bars of Bankass or Bandiagara. The exchange - of beer and words - is much more formal, especially when a circle of regulars or guests, sitting at the same table, constitutes a society of drinkers governed by binding rules. Such meetings are always scheduled in advance, on the occasion of a national holiday, or on the initiative of an individual, to celebrate an event of his or her own (promotion, birth, departure...). In the case of an invitation, the person offering the beer bottles distributes both the drink and the talk. He or she usually opens the "session" himself or herself with a conventional welcome speech, after which the participants around the table take turns thanking and praising their host. These successive compliments do not take the form of toasts but punctuate the consumption of beer; and the more the bottles are emptied, the more the praise turns to eulogy. In any other context, such remarks would border on sycophancy, but this outburst of kindness and politeness here is so formal that it does not really engage its authors. Moreover, everyone speaks as much in his or her own name as in the name of the group, emphasising the friendly relations that unite all the participants. The participants are not obliged to return the invitation: they repay their debt with a debauchery of thanks and recognition of the superior status of their host. These rules of course forbid any improvised chatting and a fortiori any buffoonery. In bars, drinkers have a rank to hold and a social status or image to defend, while cabaret customers are free to play the clown or the public entertainer, making fun of themselves or others. 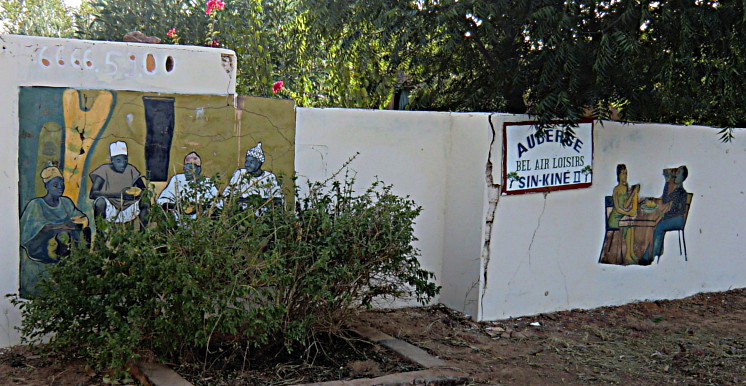 In Bankass, in the eighties, a dozen or so Bar Ben regulars sometimes decided to drink together on the occasion of a party of some kind. These regular customers were of very different professions, origins and ages, almost all of them civil servants, and their only common feature was that they drank openly in a largely Islamic environment. Once gathered around the same table, these French-speaking drinkers recreated a miniature society for a few hours by appointing a president, a secretary and a treasurer. The president distributes the speeches, authorises movements and imposes the fines; the treasurer keeps a tally of the sums owed by each participant; and the secretary notes the amount of the fines, payable only in bottles of beer, general rounds or in crates of twelve bottles. There are many offences that are punished: talking or moving around without permission, spilling one's glass or bottle, leaving the bar, etc. This tight network of prohibitions may seem excessively restrictive, but, for the participants, it is of course a game whose aim is not so much to strictly respect these rules as to break them, in order to supply the whole group with beer. The extreme codification of drinking and talking is here only intended to produce an entertaining theatrical spectacle, while ensuring a perfect equality of treatment between drinkers.

At Bankass, strict rules also encourage a virile drinking style devoid of any competition. By adhering to a rigid etiquette, these heavy drinkers demonstrate their ability to control themselves and hold their liquor. To be up to the task and to do honour to the group, everyone will drink a considerable number of Castel, and make it known around the circle, by announcing a new "corpse", for example, and then laying an umpteenth empty bottle at their feet. These corpses that litter the ground are as many trophies to increase the group's hunting score. And the next day, the drinkers will ask the barman to find out their score for the night, i.e. the number of bottles emptied. In this highly regulated framework, drinking is indeed a collective and not an individual performance. But this drinking society has no existence outside the bar and these scheduled evenings. As soon as the parenthesis of the party closes, everyone pays their drinks or fines and the society dissolves itself. When they leave the bar, the drinkers are therefore even, free of all obligations and ties, since the words they exchanged never committed them. Unlike the cabaret customers, who are looking for a space of freedom and playful competition, these city-dwellers seem to be creating additional constraints to reconcile a policed, bar-specific drinking with an egalitarian, virile and festive beer consumption. For it is on this condition - a strict egalitarianism imposed in the form of a game - that cohabitation becomes possible between city drinkers of different origins, faiths and professions.

In studying drinking companies among the Gusi in Kenya, Suzette Heald suggested that the discipline imposed on drinkers was primarily aimed at controlling their violence (1986, [1989] 1998: 231-235). As this is not the case in Dogon drinking societies, one wonders whether this author is not falling into the trap of certain Anglo-Saxon studies: analysing drinking only in terms of order or disorder, social cohesion or individualism. At the beginning of the 21st century, Dogon drinkers behave neither as individualists freed from all community ties, nor as members of a community that is fixed and enclosed on itself. Whether they live in cities or in rural areas, they behave more like subjects who organise their relationships with others themselves. Moreover, despite their almost opposite drinking manners, the customers of bars and cabarets share the same motivations: to enjoy themselves among married men by putting their differences between them in brackets, in order to escape for a brief moment from a family, professional or religious environment which is sometimes considered to be constraining.