Chapter 46 of the Domostroï: barley beer, meads and flavoured wines. 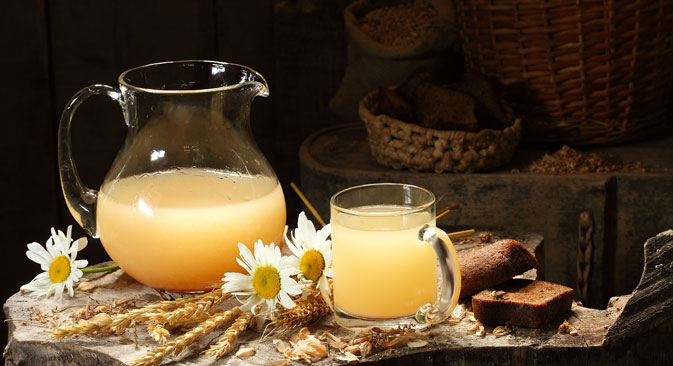 A modern brewing of white kwas.

The chapter 46 describes barley malt beer as an ordinary beverage or as a welcome drink for guests. Honeyed barley beer, 6 kinds of mead and 3 kinds of flavoured wines for special occasions, religious festivals, or visits of distinguished guests.

« 46. How a Man Must Keep Liquor Stored for Himself and His Guests. How to Present This Liquor to Company.

When a bachelor, of moderate means and thrifty, wishes to keep beer in stock for his guests, he fills the casks in March, after the barley malt has been brewed. For special occasions, he adds a little honey to ordinary beer keeping it on ice and calling it mead or March beer. To celebrate holy days, name-days, weddings, births, christenings, memorials to the ancestors, or the visit of a merchant, invited guests, or respected abbot, the host should decant mead from a vat into five pewter jugs or (depending on the number of people being served) small casks. He should put nutmeg in one little bag, cloves in a second, beneficial herbs in a third. He will warm these on the stove and mix them with the mead. He should mix sherry juice with warm wine and put it in a jug, combine raspberry juice and wine in a second jug, and add wine to prepare syrup in a third. Then he can offer his guests six kinds of mead, two [sic. three] kinds of wine and cherry juice, in either casks or pewter jugs, and two kinds of beer as well.

Anyone who keeps his house stocked and has an orderly wife will never be shamed before his guests. Except for the occasional rare item, god provided everything they need at home. »

Excavations in Novgorod in the 1950s uncovered ancient documents written on birch bark. One of them, dated 1360-1380, speaks of brewing barley beer. "Greetings from Griksha to Esif. Onanya dispatched [a person or a letter] with the words... I replied, 'Esif didn't tell me to prepare a meal for anyone.' Then he sent to Fedosya : 'Brews beer [пиво / pivo]. Don't just stand around. Cook (brew) the grains (жито)'.[2]

[1] Article 9: "And this is the schedule of fees which obtained in Iaroslav's reign [1019-54] for the bloodwite collector: the bloodwite collector is to take seven buckets of malt [7*16=112 liters] for a week, and a ram or half a carcass of meat or two nogatas; and on Wednesday a kuna or cheese, and on Friday the same; and two chickens per day, and seven measures of bread, and seven measures of millet, and seven measures of peas, and seven [measures] of salt." The Pravda Rus'skaia, The Expanded Redaction Translated by Daniel H. Kaiser (extract). Bloodwite was a punishment for committing a blood crime, replacing the death penalty (often with torture) for the murderer found in Byzantine laws. The collector was responsible for collecting the fines paid to the prince, but himself and his company were maintained at the expense of the peasant community, held collectively responsible for the crime, during the time of the trial, which is regulated by Article 9. This article describes the meals provided to the bloodwite collector for one week: malt beer (pivo), meat, cheese, chickens, bread, peas and salt. It should be noted that clerks and court officials do not drink braga or kwas. A city carpenter, in fact a builder of wooden walls, received 'only ten measures [10 * 13 litres] of malt' per week along with other victuals (Article 96, if 'measure' means 1 vedro or 1 bucket).