Result of your search [7 articles]

Mutual virtues and imperfections of Chang and Tea.

Each genius, informed of the king's questions, defends her cause before him and speaks alternately. Under the guise of a female turquoise genius, Chang (Beer) initiates the Contest :

"  I am the best of all beverages whose name is Amrita.
So, please allow me to tell you my actual story.
For a long time in the vessel of the external world
According to Karma, various kinds of animate beings were born.
Generally, because of the good merits of sentient beings,
Particularly, because of the nurturing warmth and moisture of the great compassion of Buddha,
And because of the many means of dependent arising’s
The Merciful Mother-White-Barley was born
To provide them food.
That very mother gave birth to two children:
The first was my brother, Precious Tsampa,
The second, myself, Deden Dutsi (bde-ldan bdud-rtsi). "

The origin of Chang is enshrined in the creation of the world, of the human beings, an the White-Barley-Mother (pure Barley) of whom were born tsampa (roasted barley) and chang (beer). Food and fermented beverages like brother and sister from the same "mother-corn". This agrarian theme is common to many cultures which link the birth of beer and agriculture. Tibet is no exception. Even in the high valleys of Tibet, the material basis is agriculture. Barley fields and yaks are the main resources for Tibetan inhabitants. 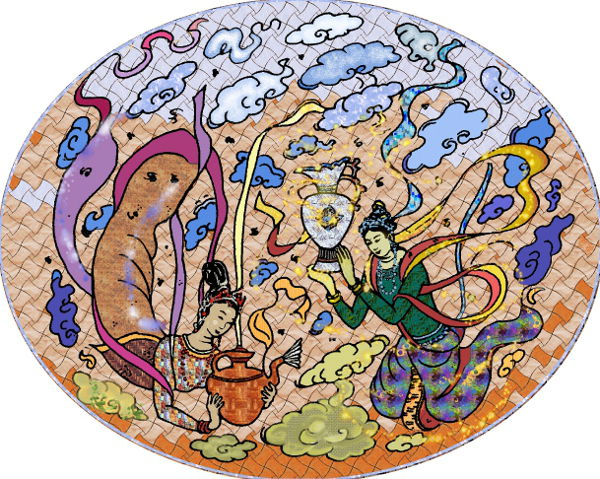 The text emphasizes the technical and cultural relationship between high solid foods (flour/bread /cake/tsampa = roasted barley) and the liquid fermented beverage, both made from grain. It should be noted that chang-beer is often brewed with a brown barley specially grown for beer brewing, different from the white barley reserved for flour.

The chang-beer was nicknamed Deden Dutsi, "Nectar of Joy" in Tibetan. The allusion to wonderful drunkenness is obvious. Deden is another Tibetan name for the drink of immortality of Indian gods, the amrita. The dual heavenly (intoxicated spirit) and earthly origins (Mother-White-Barley) of the beer are here strongly emphasized.

The Chang-beer rooted in the tibetan society

"  Since time immemorial in India, the Land of Arya(s)
As well as in the Celestial Land surrounded by snow-capped mountains,
The Lamas (bla-ma), Yidams (yi-dam) and Dakini(s)
Offered me, Deden, for special sacrifice.
Unstained wishes and prayers were fulfilled in this sphere
That is why blessings and accomplishments fell upon them like rain.
Even abbots, Acharya(s) and Siddha(s) used me for drink.
They offered me – Deden – as the best drinkable-offering.
And their knowledge gradually grew like leaves of a walnut-tree,
Their attainments became more and more ripe like the fruit of a walnut tree.
Crowds of kings and their ministers, as well as great chiefs
Begged me, Deden, to give them pleasure.
And their wisdom gradually increased like summer days,
Their magnitude blazing brighter and brighter like the rising sun.
All the young queens and beautiful ladies
Used me – Deden – as the best beverage.
Having been filled with chang they laughed joyfully.
Many melodious songs rang out again and again.
Crowds of heroic generals and captains,
As well as their faithful soldiers also took me, Deden.
Thus the flame of their courage became sharper and sharper.
And like lions they attacked their enemies again and again.
Crowds of old parents and youth from among the subjects
Quenched their thirst with me, the Golden Chang,
And their happiness and gladness increased like the rising sun,
And their fortune grew like summer grass. "

Before quenching men, chang honors the spiritual powers. The lamas following Vajrayana offer it in their devotion to personal protective spirits, Yidams and Dakinis who guide them. Abbots, Acharyas and Siddhas, accomplished masters of Buddhism, make chang-beer enter in their sacrifice, which does not imply that they drink it.

Even kings, queens and their attendants, ministers and chieftains consume plenty beer. Chang calls himself Deden Dutsi, "Nectar of Joy", an obvious theme of liberating drunkenness. And a recurrent agrarian theme : sacrifices accompanied by Chang-beer bring the beneficial rain on the Tibetan plateau dried by a harsh and dry climate.

The Tibetan word dutsi translates the Sanskrit Amrita, the ambrosia of the Hindu gods which confers immortality. Dances, songs and happiness accompany chang, the less frequent theme of the cultural beer, the noble beverage of the spirit, the refined beverage of the royal courts. Chang offers courage to armies, from the general to the humble soldier. This reminds us of the military character of the ancient Tibetan kingdoms, certainly serving the Buddhist Doctrine, but surrounded by many enemies.

Finally, the people finds in beer the comfort of daily sorrows and the assurance of their prosperity thanks to the honours bestowed for the protecting powers of the country: mountains, valleys, rivers.... One throws drops of chang< on the ground before bringing the lips to his cup of beverage. These powers must drink first. The chang -beer is due to them. It comes from the ears of barley or wheat that grow from the earth.

Under the pen of Bon Drongpa, Chang< unfolds a true social theory: every stratum of Tibetan society has its own usage of beer. Spiritual benefit for the llamas, political benefit for the king and his court, military benefit for the soldiers, economic benefit for the people of the farmer-breeders. The social strata of the craftsmen, the relegated, the excluded, are not spoken of. By the way, Chang does not fail to remind us that it is also called gser-skyems in the ceremonial language, literally " gold-beverage ", the golden chang. Maybe an allusion to the copper or golden vessels used to serve beer at royal banquets, apart from the color of the beer itself.

Here is the first self-lorification by Chang. For her, tea is a latecomer on the Tibet scene, a tramp which has come from eastern China. Accused of poorly feed, it drives the wise man to distress. Mixed with butter and salt that must be obtained at great effort (the salt comes from far north with the yaks-caravan, when the ears turned into beer grow at the foot of houses), tea impoverishing people, its convey mobilizes efforts and pain which turn them away from the spiritual quest. In short, the work of humble people against the benefit of an aristocratic social class.

Read the 7 articles related to your tour