Result of your search [2 articles]

2 - The conjectural potato beer of the Tehuelches in 16th.

In 1520, Magellan's expedition sailed along the coast of South America in search of a passage to the Pacific to open a trade route to the Moluccan Islands, source of spices, especially cloves and nutmeg. Between March and August 1520, the 5 ships wintered in a bay near the Rio Deseado. Without knowing it, they anchored some 500 km north of the sea passage to the Pacific. This channel will be named Strait of Magellan. 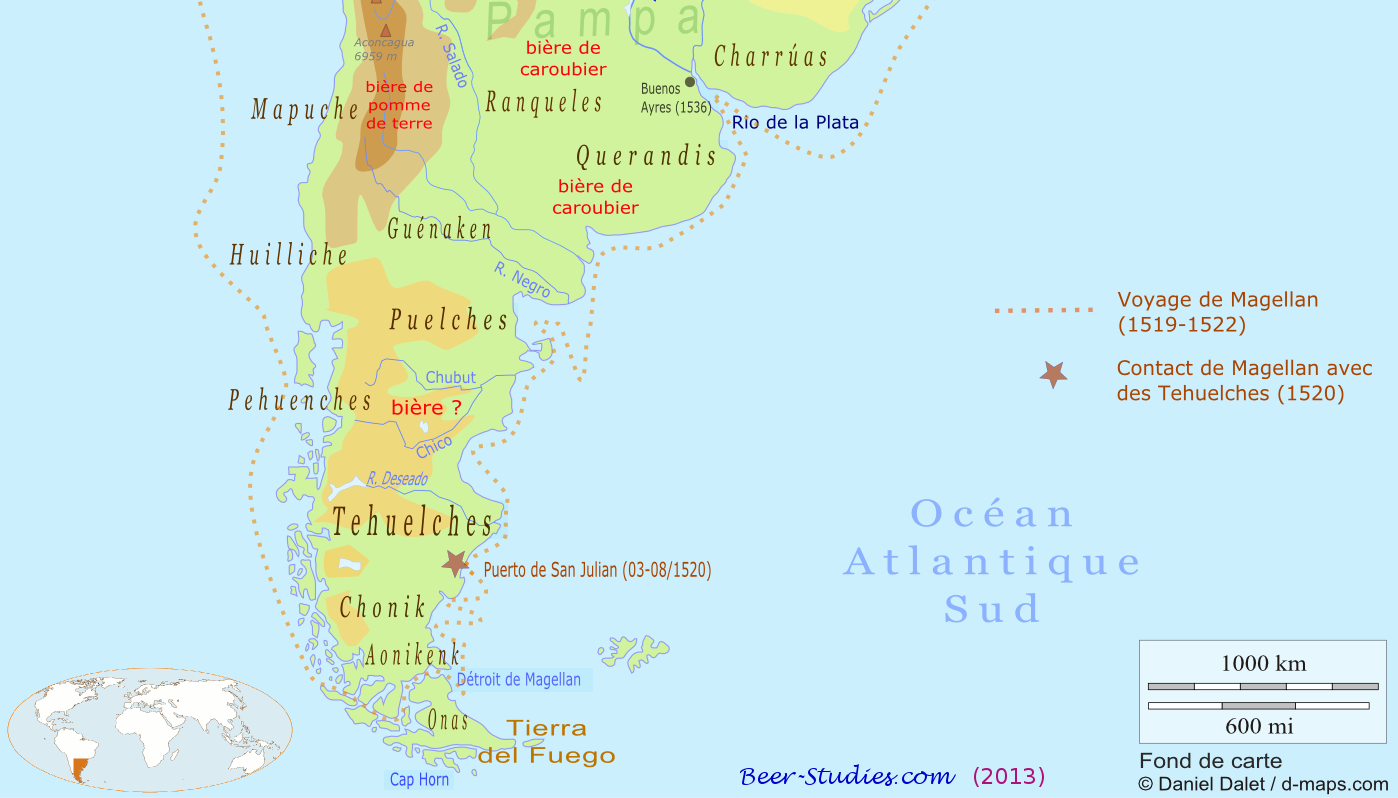 During the winter, the first contacts are made with the Tehuelches Indians who live in this region. According to the logbook of the Genoese pilot Leone Pancaldo, who came back alive from his round-the-world trip:

« The men are 9 and 10 span high [or 1.80 m to 2 m, "as tall as those of Germany or the Nordic countries", says the Leiden manuscript], with very well made bodies. They have no home, but they go around like animals and eat half raw meat. They are skilful with bows and arrows, and they hunt beasts and take off their skins to make clothes for themselves. They soften these skins to the extreme and cut them up according to their shape, then they cover themselves with them and tie them at the belt. When they want to go bare-chested, they let the upper part fall back to their waist. They wear shoes that go up to the ankle and fill them with straw to keep warm. They don't know iron or any other kind of weapon: they use stones to make the tips of their arrows and axes, and machetes and awls to carve and sew shoes and clothes. They are a very alert and peaceful people, who accompany the wandering of their livestock. They make their shelter where they are surprised by the night, and the women follow the men with all the goods they possess. These women are small in stature and carry heavy burdens on their backs. They dress and wear shoes like the men. » [1]. 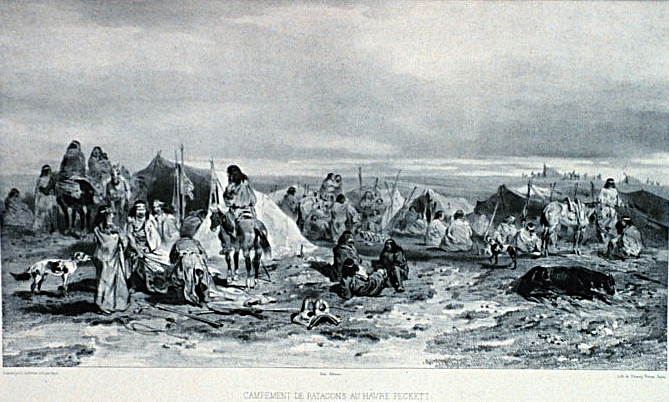 The Tehuelches are nomadic hunters or fishermen, occasionally guanaco breeders. There is no evidence that they brewed beer. Nevertheless, Pigafetta, supernumerary and Magellan's assistant on board of the Trinidad, the Magellan's flagship, gives other troubling details:

« Captain [Magellan] called this kind of people Pataghoni, who have no houses but shacks [capanes portatilis = tent] made of the skin of the aforementioned beasts of which they are clothed, and they go here and there with their so-called barracks, like the Egyptians do [Cingani = Gypsies]; they live of raw flesh and eat of a certain sweet root which they call capac. » [2]

This capac is an original tehuelche name phonetically transcribed by Pigafetta. The latter provides a repertory of a few "Patagonian" words collected from the mouth of an adult Indian who was forcibly held for several weeks on board the flagship. The "Capac refers to the "grass powder they eat", it is necessary to understand the flour obtained from a food root. The Tehuelches use this root to make a kind of bread, according to the short lexicon written by Pigafetta himself.

« ... said to me that word this giant that we had on the ship, for he asked me capac, that is to say bread, because that's how they call this root that they use for bread, and oli, that is to say water, when he saw me writing these names ... » [3]

Capac therefore refers to a vegetable source of starch. It provides a flour that can be made into a kind of bread, at least a food equivalent to a sailor's biscuit. Among the starchy roots likely to grow under this latitude, is that capac a yam or a sweet potato (less plausibly), or simply a potato?

This root is not identified. Pigafetta does not give any other information. In the harsh and cold climate of Patagonia, potato varieties are thought of. The Mapuche, eastern neighbours of the Tehuelches, live on the Pacific coast, grow potatoes and know how to make a beer from them.

From these scanty observations, we will not know whether the Tehuelches had discovered a method for making a beer from mealy tubers.

Read the 2 articles related to your tour