Result of your search [8 articles]

7 - Beer and the drinking manners in the fort of Vindolanda.

A wide range of foodstuffs is attested in the tablets, including cereals, game and farmed meat, beer and wine, fruit, vegetables, herbs and spices. The prevalence of preserved pork is illustrated by numerous references to bacon, ham and fat. Nevertheless, cereals remain the staple food. Wheat has been used for bread (panis) and perhaps also for puls, a kind of porridge. Barley feeds the animals and enters as a brewery raw material. The indications given by the tablets are supplemented by archaeological evidence. The remains of cows and sheep predominate in the animal bones found at the site, but their consumption is not recorded in the tablets. The number of wooden barrels reused as fencing is large. Beer must have been an important and ordinary drink for the soldiers, although higher-ranking soldiers may have preferred wine.

Most documents come from the prefect's house. The diet is probably not representative of the entire garrison. However, the limited information on the ordinary soldiers suggests that they also had access to certain luxuries. In spite of the expenses that reflect his long journey to North Britain from Asia, pepper was purchased by a soldier who appears to be of fairly low rank. Emperors and generals have always favoured their armies in Roman society, especially the garrisons stationed abroad, along the limes of the Roman world. 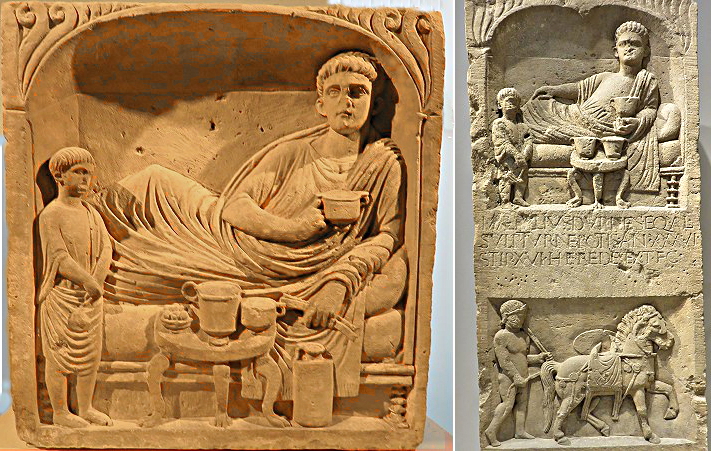 The letter from the decurion Masclus to his prefect Cerialis shows that the soldiers drank beer very regularly, if not daily. " Masclus to Cerialis his chief (master?), salute. Please, my master, give instructions for what you want us to do tomorrow. Shall we return with the standard (the altar?) to the crossroads all together or one after the other (i.e. by half)? ... good fortune and be kind to me. Farewell. My fellow soldiers have no beer. Please, order to send some. (Verso) To Flavius Cerialis, prefect, of the decurion Masclus " (Bowman, Thomas 2003, 85).

Meal utensils are mentioned in the tablets and can be found among the archaeological finds.

The tablet 194 is a list of vessels for food and beverages : scutulae (shallow dishes), paropsides (flasks), cotyles (vinegar bowls), ouaria (egg cups), calices (cups) and trullae (bowls). These vessels were made of terracotta, glass, bronze, or even silver, all of which are archaeologically attested in Vindolanda. The tablet 196 records different types of clothing, including coats and tunics, some of which are suitable for eating. The life of the garrison commander could be as much about good business as it is about military tactics.

The depiction of feasts was a common motif in Roman funerary art. The diner is shown lying on a couch, with other furniture and utensils for eating and drinking. An example is the gravestone of the cavalry auxiliary Marcus Aemilius Durises found in Trier (now in Bonn Museum, Germany).

Read the 8 articles related to your tour