Arrival in October 1976 of the French anthropologist Philippe Descola in the house of Wajari built along the Capahuari river : 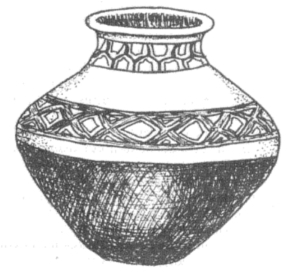 Muits, the fermentation jar for the cassava beer. Achuars. After Ph. Descola's documents. Ph. Descola, The Spears of Twilight: Life and Death in the Amazon Jungle. p. 102.

« Suddenly the master of the house exclaims: "Niajiamanch! Wari, jiamanch, jiamanch, jiamanch!" It is time for the women to serve the manioc beer, nijiamanch, the smooth, slightly alcoholic drink that constitues the ordinary, everyday beverage. My companions never drink pure water and the manioc beer serves as much to quench the thirst as to fill the stomach and lubricate the conversations. A few extra days of fermentation convert it into a strong beverage that is consumed in repeated libations during the holidays. With Senur busy gutting the peccary on the banks of the Kapawi, it is his sister Entza, the second wife, who runs to her husband with a pininkia, a large terracotta bowl engobed in white and finely decorated with red and black geometric motifs. With one hand immersed in the whitish liquid, she kneads the manioc paste to help it to dissolve in the water. now and again discarding fibres that float to the surface. Good beer must be smooth, without lumps, creamy to the palate and not too watery. » (Descola) [1].

The drinking manners are codified. Women are in control of beer from the brewing process to its ingestion by the men and themselves. Men must not refuse the beer, at least the first few cups. Avoid aerophagic manifestations or getting up to urinate.

« Beer is drunk according to a precise code of decency that I assimilated in a few days, since it is always through the table manners that the learning of an unknown culture begins. It is inconceivable to refuse the cup offered by a woman; such a gesture would be interpreted as a sign of serious mistrust towards the amphitryon, suspected of having poisoned the beverage. It is said that only the dying and the declared enemies disdain the nijiamanch presented to them, as this conduct of both is the most reliable indicator of their true condition. However, pininkia should not be accepted in haste: a great reserve is required here, and under no circumstances should the stranger at home stare at the woman who is being served, as this would make her look like a seducer. This avoidance makes the libations all the more circumvented as it is unseemly for a man to touch the cassava beer, over which the women continue to exercise control until it is ingested. » (Descola). 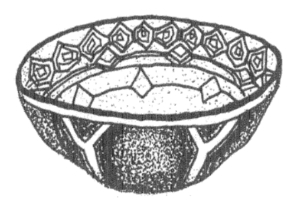 Cup or bowl to serve the cassava beer. Achuars. After a Ph. Descola's document.

Even when an insect drowns in the beer cup, the drinker should not dip his fingers in it. Only a woman can do this.

Everyone drinks beer, all day long and up to 5 litres on average. The water, which is too infested throughout the Amazon basin, is not consumed. The Achuars, like other Amazonian peoples, distinguish between celestial water (yumi) pure and drinkable, and terrestrial water (entza) non-drinkable.

To prepare the beer, one draws (terrestrial water) from the river which is transformed into celestial water by the magic of fermentation and from the special yumi gourd in which it is collected. This semantic diversion makes the infested water suitable for brewing beer.

One can only feed on beer, rich enough on its own, at least for a few weeks. On expeditions (hunting, war), the women bring paste wrapped in palm leaves, which is simply diluted and left to ferment.

On the occasion of collective work (slaughter, house building, fishing, moving of the group), drinking parties are organised, as for departures during the war. Refusing to drink is frowned upon. Refusing the beer gourd held by a brewer-woman exposes one to ridicule or suspicion.