Home > Exploring the historical time-space of beer > North America > The Ameridian brewery in North America > Beer amongst the State-less societies > Ancestral Pueblos, Zuňi and Hopi in the Southwest

North American Indians and beer?Article 4 of 18 The Cultures of Mississippi from 10th to 16th century. 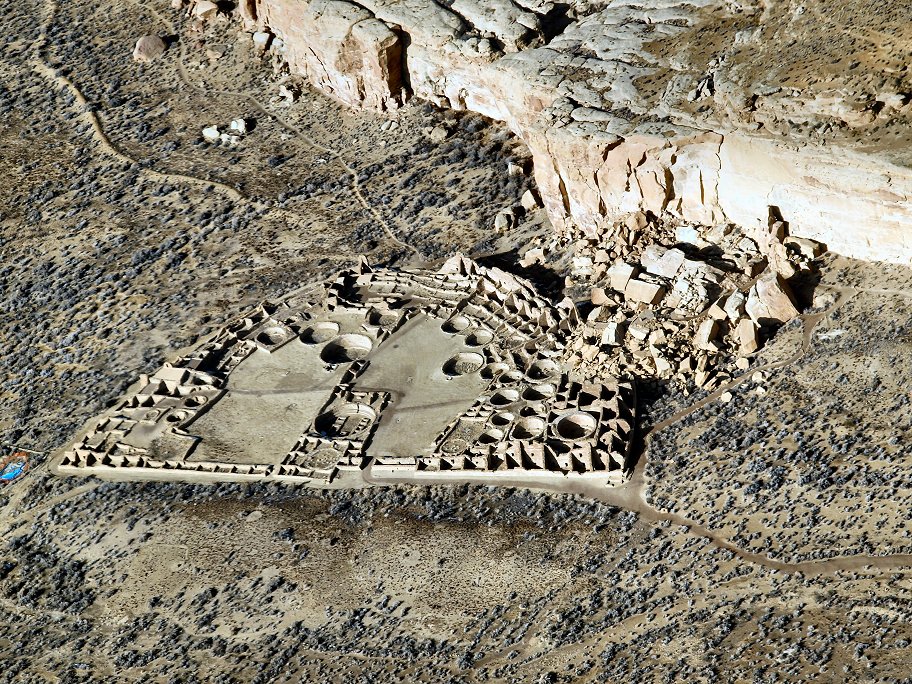 Aerial view of the ruins of Pueblo Bonito (Chaco Canyon, New Mexico), a site inhabited between about 800 and 1200 by the Ancestral Puebloans.

The Ancestral Puebloans were an ancient Native American culture that spanned the present-day Four Corners region of the United States, comprising southeastern Utah, northeastern Arizona, northwestern New Mexico, and southwestern Colorado. Archaeologists continue to debate when this distinct culture emerged. The current agreement, based on terminology defined by the Pecos Classification, suggests their emergence around the 12th century BC. Therefore, at a time when maize farming had already spread to the southwest of North America (Judd 1954, 52-63).

The ancient Pueblos of Chaco Canyon brewed maize beer before any contact with European settlers. Shards discovered in Pueblo Bonito in 2006, dated between 800 and 1100, show traces of fermentation of maize grains[1] . The three shards analysed belong respectively to : 1 cylindrical jar, 1 pitcher with black/white decoration, 1 spotted bowl from the Mogollon culture (Fig. 4). The chromatography (Gas C./ Mass C.) of the residues found in these shards was compared with that of contemporary samples of beer pottery from the Tarahumara (Northern Mexico). The similarity of specific organic compounds implies that these ancient vessels contained a maize beer.

In 2007, characteristic traces of fermentation (pitting and microperforations on the inner walls of vessels) were observed on sherds from Ancestral Puebloan sites in New Mexico. 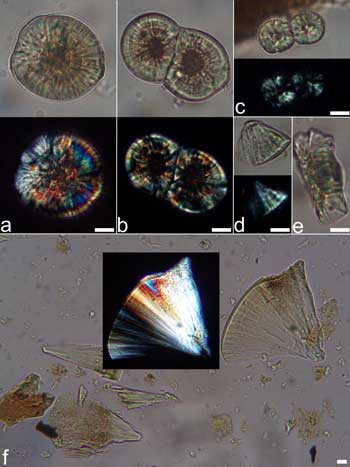 Maize starch granules under the electron microscope.
Effigy of a woman with a cup, Paquimé, Mogollon culture.

A more recent research conducted in 2016 in Casas Grandes (or Paquimé, Chihuahua State, Mexico) on the teeth of skeletons exhumed during excavations in the 1950s-60s revealed starch granules and phytoliths fossilised in tartar. The phytoliths belong to maize varieties. The starch granules show the typical distortions resulting from germination and alcoholic fermentation (swelling, striations), which can be observed under an elctronic microscope and a polarised light.

More interestingly, the 110 skeletons studied were buried at Casas Grandes between 700 and 1450, during the period of development and expansion of most sites located in the Casas Grandes valley. However, the traces of fermented maize do not appear on the teeth until around 1200 (Medio Period of Casas Grandes). The adoption of fermented grain-based beverages seems to coincides with a major social evolution that affects the subsistence economy (Which technique can convert a food resource into an alcoholic beverage?), society (Who controls the maize stocks? Who decides to convert maize grains into beer?), and collective representations (rituals, festivals, collective behaviours linked to drunkenness, gender specialisation, etc.)[2] .

“Turning maize into beer during the Medio period, however, could suggest an influx of new ideas — or perhaps even people — during that time, which might indicate outside influence — either foreigners coming to Casas Grandes, or locals traveling and coming back with new ideas.” (David King 2016)

The 12th century seems to be a pivotal period for the American Southwest. The changes spread from central Mexico. Casas Grandes became in the 14th century a city of about 3,000 people, a trading post between central Mexico and the southwest, a center of political power and the nucleus of a hierarchical society. The historical details of these local developments are still very unclear, as are their impacts on the Amerindian societies of North America.

The historical details of these local and regional developments are still very unclear, as are their impacts on the Amerindian societies of North America. The general trend of these technical and cultural influences is undoubtedly from south to north, from the very dynamic Mesoamerica between the 10th and 13th centuries to the American Southwest. The brewing of maize beer is a privileged witness of these significant evolutions because this fermented beverage reflects changes that are at the same time technical, social and religious. However, it is not impossible that a dynamic specific to the American Southwest played a regional role. Researchers have suggested that this region was a very active centre of food plant domestication at an early date. The chronology of all these developments is the subject of several studies since the 80's (map below).

The study of the spatial and chronological distribution of drinking ceramics in the Pueblo Bonito site (Chaco Canyon) since 900 has revealed several phenomena. The shape of the vessels varies according to time, the nature of the beverages and the social category[3]. The oldest (600-700) imitate vegetable gourds. The frequency of pitchers and cylindrical jars between 900 and 1100 indicates a period when fermented beverages and cocoa from central Mexico played a major role in social life, rituals and exchanges. Analysis of the cylindrical jars indicates that they were used to prepare and drink caffeinated beverages such as chocolate or black drink. Around 1100, the cylindrical jars disappeared and were replaced by smaller jars for various beverages including maize beer. Casas Grandes does not tell us when maize beers first appeared in the region, but when they played a predominant role in the organisation of the Amerindian societies of the region and in their religious complexes.

These data converge to fix the time when maize beer became one of the main fermented beverages in northern Mexico and the American southwest around the 10th century. There is a large chronological gap between the adoption of Three Sisters agriculture in the region around 2000BC and this central role played by maize beers. Maize beers were not the first fermented beverages to appear in these territories. Mead, maguey (pulque), tunas and fruit wines have been prepared and incorporated into ceremonies since the Classic period (300-600) of ancient Mexico, and probably earlier (Waddell 1980, 4). Maize beers appeared after these primitive fermented beverages at an unknown time. This time lag confirms that the mechanisms that give beer a central function are not only technical (maize cultivation, pottery, fermentation) but also social (hierarchy, political power) and religious (fertility rites, priesthood)[4]. These three factors combined would explain the long evolution of two millennia that separates the first agricultures based on the Three Sisters and the prevalence of maize beers in Southwestern Amerindian societies. The later stages of this evolution were studied on the basis of archaeological, linguistic and ethnological data.

Two probable routes have spread a set of social practices and techniques from the north of Mexico (Waddell 1980, 4 fig. 1.1): the cultivation of the Three Sisters and associated techniques (irrigation, feeding, brewing), and religious complexes involving food plants, fertility/rain rites, and annual cycles. These new practices have been integrated with the older ones. Maize beer does not obliterate the pulque and other fermented beverages made from aloe, maguey, prickly pear, pitaya, and even wild grapes. The agriculture of the Three Sisters coexists with the gathering of plants and hunting. The result for the American Southwest is a patchwork of peoples and very diverse social organizations adapted to their environments. It was built up between the 10th and 16th centuries. This historical reconstruction remains however rather vague because the data are piecemeal and very heterogeneous. The differentiation between beer and other fermented beverages is only partial in North America. The mixed fermented beverage regime that characterises the protohistoric beverage basis (everything that can ferment is mixed to make a beverage that is simultaneously beer, wine and mead) seems to have persisted into modern times among the Amerindians[5].

Map of Native American tribes in the Great Southwest showing their distribution at the time of European contact around 1700, and the two routes of diffusion of Mesoamerican traits, after Waddell 1980, p. 8 fig 1.1 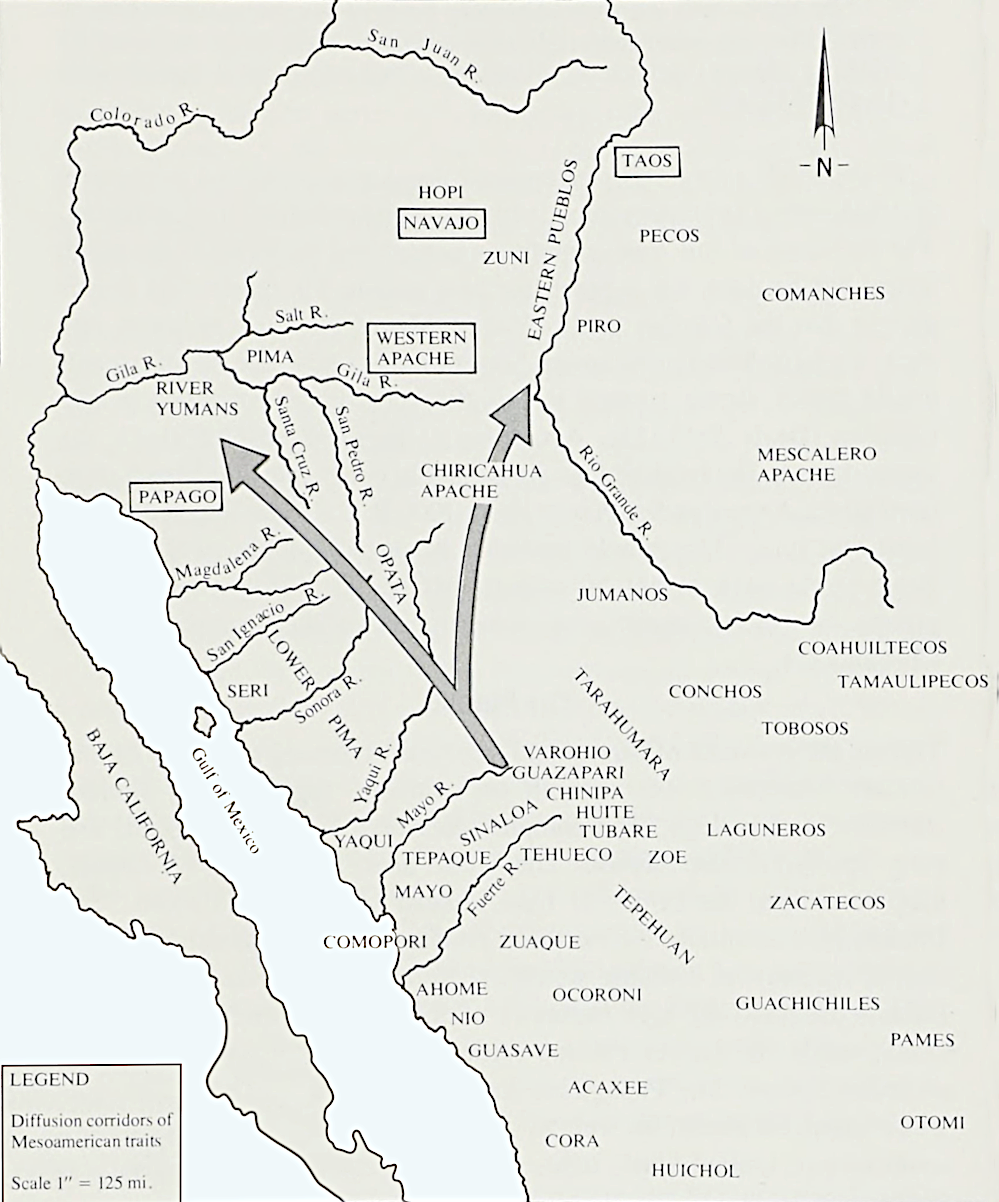 This is virtually the only archaeological evidences so far attested for North America and the Mexican border region. The protohistoric proximity of the Ancient Pueblos to Mexico confirms that the region was an indigenous brewing centre at least 700 years before the arrival of Europeans.

Archaeology suggests that the Zuňis have inhabited their present location, the Zuni River Valley, for 3,000 years. During that time, the ancestral Zuni people would have irrigated tiny patches of land to grow maize and other associated plants. How long have they been brewing maize beer? Since at least the 8th century according to data from Pueblo Bonito (Borek 2007), but certainly earlier with the evolution of the Mogollon culture between the 3rd and 15th centuries (see map "Fermiers et chasseurs-cueilleurs ...").

The Hopi Indians had a very different pattern of use and adaptation of alcoholic beverages. Because of their proximity to other groups that used alcoholic beverages, it is likely that the Hopi were familiar with alcoholic beverages in protohistoric times, but rarely adopted their use at ceremonies or social events. Ethnological observations that describe this absence of fermented beverages are too recent and contradictory. They are often based on a confusion between distilled alcohol introduced by the White people and effectively rejected by the Hopi on the one hand, and native fermented beverages on the other (Waddell 1980, 24).

[4] See Beer-Studies for a detailed discussion about the protohistoric developments of the major brewery basins in the world and the primitive basis of the mixed fermented beverages.

[5] Archaeology, linguistics and ethnology do not address and describe the same realities.

North American Indians and beer?Article 4 of 18 The Cultures of Mississippi from 10th to 16th century.