Home > Exploring the historical time-space of beer > North America > The Ameridian brewery in North America > Beer amongst the State-less societies > Creek, Cherokee and thier maize beer.

The Natchez and the Mississippi Company.Article 15 of 18 The Amerindians of the Great Northwest and beer.

The Creek, the Cherokee and their maize beer. 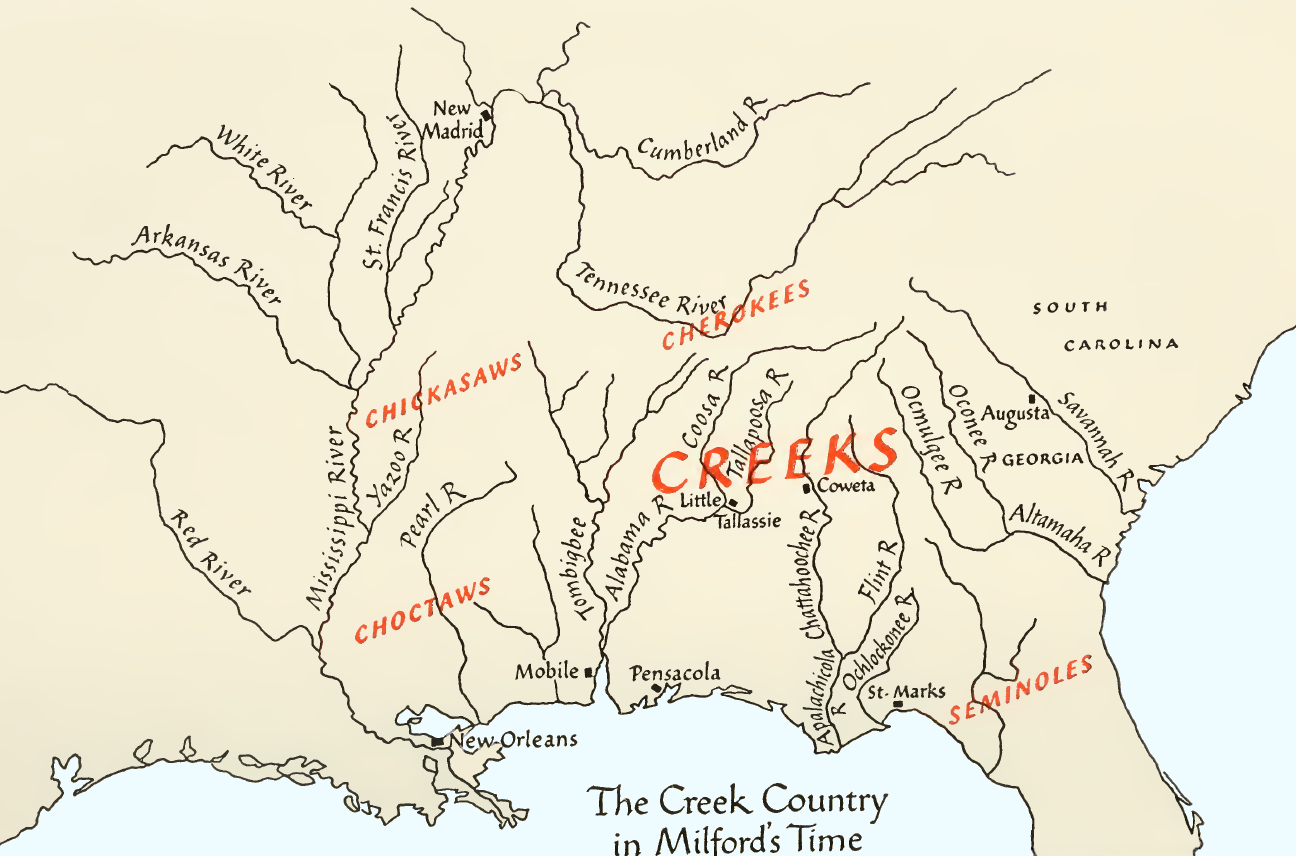 Territories of the Creeks, Cherokees, Seminoles and Choctaws in the time of Milfort around 1785.

There are some late accounts (19th century) describing the Creek sagamite as a fermented maize drink, a diluted maize porridge that is left to ferment in a vessel.

Jean-Antoine Leclerc de Milfort left for America and in 1776 and joined the Creek nation, whose customs and language he adopted. The powerful Creek confederacy lived east of the Mississippi (present-day Alabama), in latent war with the American colonists of the East Coast and the Spaniards of Florida. He became a war chief under the name of Tastageny (Great Warrior).

“They received us [the Osages] with marks of great satisfaction, and immediately on our arrival gave us cooked meat and sagamite (1). My people, who had not drunk sagamite for nearly a year, were very satisfied with this reception, to which they did great honour by the quantity of this liquor they consumed.” (Milfort 1802, 102-103). Note (1) written by Milfort himself explains “Sagamité is a kind of beverage made from maize flour.”

Further on, Milfort states “It was about noon, and I saw the chiefs being served roasted meats, bread, and sagamite, a drink of which they make great use (1)” (Milfort 1802, 212). The note (1) says “Sagamité is a fermentation made with maize flour, which, after being boiled, retains a rather pleasant cider taste.” Given by a soldier born in the Ardennes and used to drinking all kinds of alcohol, the fermented and alcoholic nature of the Creeks' sagamite, its cidery taste, are not in doubt. The English who frequented the region at the same time knew this beer as thin beverage, the Creeks called it oafka.

“The common food of the Creek is Indian corn, pounded and boiled, with which they mix a small quantity of strong lees of the ashes of hickory wood. It is boiled until the corn is tender, and the liquor becomes as thick as rich soup. The lees give it a tart taste, and preserve it from souring by the heat of the climate. From day to day they have it constantly standing in large pots or pans, with a spoon in it, ready for use. It is called by the Indians Oafka, and by the whites, Thin-drink. Those who have been long used to it are excessively fond of it. The Indians, who eat not much of any other food, go to it, and eat of it, about once an hour all day "[1].

Another report of this light maize beer is provided by William Bartram who travelled through the Creek, Cherokee and Seminole territories in 1773: “THE pipe being filled, it is handed around, after which a large bowl, with what they call "Thin drink," is brought in and set down on a small low table; in this bowl is a great wooden ladle; each person takes up in it as much as he pleases, and after drinking until satisfied, returns it again into the bowl, pushing the handle towards the person in the circle, and so it goes round.” (Bartram 1791, 184)

A question arises: the oldest mentions of sagamité describe an unfermented maize porridge. The maize mazamorras consumed by the Spaniards during the expeditions of Pánfilo de Narváez and Hernando de Soto in 1527 and 1542 are not described as a fermented porridge (4.2). The Page du Praz, who lived close to the Natchez between 1718 and 1734, does not describe their maize porridge as fermented. Are these old sources incomplete or did the nature of sagamite change with the coming of Europeans to the Mississippi, with wars or cultural borrowing?

The Creek in Georgia and the Cherokee in the Carolinas used berries and other fruits to make alcoholic beverages (Cherrington 1925, 4, however quoted without sources). It would be surprising if they had not learned to spontaneously ferment maize porridges. Why are testimonies so rare?

-      First reason: sagamite is always described as a food and not a drink. Seventeenth century Europeans lost the memory of primitive fermented soups at a time when porridges and drinks belonged to two quite separate domains of nutrition in Europe. For example, Antonio de Espejo wrote in 1582 that the Pueblos only drank an unfermented drink called pinole made from dried maize grains and water, an obvious blunder. The malting of maize by women and the secret beer drinking ceremonials held in the kinvas escaped him (Waddell 1980, 21-22). The early French and Spanish settlers of Mississippi and Florida probably made the same mistakes.

-      Second reason: the conflictual relations between Amerindians and colonists left no room for a fine and continuous observation of Amerindian customs. The only people able to understand them from the inside were Europeans adopted by a tribe who chose to live among the Amerindians from the very first contacts, captured by them or freely fleeing the constraints of "civilised life". Unfortunately, they left no written records. The case of Milfort is exceptional and late. When Napoleon decided to sell Louisiana to the American government in 1803, the territory was doubled in size.  The march of the colonists towards the West resumed and military expeditions proliferated. The Lewis and Clark expedition from the Missouri to the Pacific (1804 to 1806) decided by Thomas Jefferson provided little information about the Amerindians. Its objective was primarily military. Border policy with the Native Indians was controlled by the army. The Bureau of Indian Affairs, created in 1824, depended closely on the War Department, which exercised a strict censorship over everything published. In-depth knowledge of the Amerindian peoples was not the agenda[2].

It is difficult to reconstruct the history of the Creeks since the 15th century and to speculate on the evolution or adoption of fermented maize beverages. Historical, archaeological and ethnological data are lacking. This is generally the case for all northern Native American peoples whose cultural memory has been crushed by epidemics and extermination, except for the peoples of the American Southwest.

Regarding the Cherokees, testimonies are rare. Bourke, a cavalry lieutenant who had fought the Apaches and was familiar with the way of life of the Southern Amerindians, notes: “Tizwin differs somewhat from the sour drink made by the Cherokees from corn-meal gruel and regarded by them as very palatable and refreshing in sultry weather” (Bourke 1894, 297).

[1] Swan Caleb, Position and State of Manners and Arts in the Creek, or Muscogee Nation in 1791. In Information Respecting the History, Condition, and Prospects of the Indian Tribes of the United States, Vol. 5, by Henry Rowe Schoolcraft, pp. 251–283. Lippincott and Grambo, Pliladelphia. https://digital.lib.niu.edu/islandora/object/niu-lincoln%3A38285

[2] The reports, studies and accounts signed by officers reiterate the same image: the Indian is savage, bestial and impossible to subdue.

The Natchez and the Mississippi Company.Article 15 of 18 The Amerindians of the Great Northwest and beer.