Beer and the early days of Christianity

The beer and the early days of Christianity.

Beer is never mentioned in the New Testament, and very rarely in the later texts of the Church Fathers. It is nevertheless produced and drunk among the peoples of the Mediterranean basin who were integrated into the Roman Empire, by the most modest categories or the so-called "barbarians" who were forcibly displaced by the empire or took refuge behind its limits. In its economic and political relationship with the conquered peoples, Rome favoured viticulture and the wine trade, except on the northern margins of the empire (examples of the Britons in Vindolanda, the Germans on the banks of the Rhine described by Tacitus, the Gauls),  and in countries with ancient brewing traditions such as Egypt or the Iberian peninsula.

From an ethical point of view, the early Christian Church adopted the cultural judgements of the Roman elite. It did not matter whether a slave or a citizen of the empire drank beer or wine. Like Judaism, the Christian morals disapprove of alcohol but do not forbid it. Some epistles, however, go as far as condemnation. St. Paul pronounces the worst curse for a Christian against drunkards: not to be reborn on the day of the Last Judgement :

« ... nor thieves nor the greedy nor drunkards nor slanderers nor swindlers will inherit the kingdom of God. » (Corinthians 6:10).

The Roman culture and society favoured wine as a noble beverage and demeaned beer on the side of the barbarian or non-native peoples of the Roman empire.

On the doctrinal level, however, the Christian religion caused a far-reaching break: it banned beer from the sacred domain. This is the most radical shift. Beer can no longer claim any role in agrarian rituals, offerings to God or Christian ceremonial, as did the Eastern, Egyptian, Hittite, Thracian, Phrygian, Celtic, Germanic, Celtiberian, ... peoples. Wine takes over all the sacrificial symbolism and symbolizes alone all the positive virtues that a fermented beverage can convey as a vehicle of some symbolic intoxication, the one that a believer seeks or offers to one's god. It is for example the drunkenness of the god sung by the mystics. It comes from the vine and the bunch of grapes, even if for contemplative orders and religious people this wine is more mystical than material (Canticle of Canticles by example). The grains, the legitimate fruits of the earth, offer the bread, but on condition that there is no trace of fermentation. From now on, beer is driven out of the sacred space. Its symbolic role in the agrarian rites of Europe's village communities will gradually be reinterpreted by the Christian church as a pagan survival, condemned and fiercely fought against by priests and bishops. 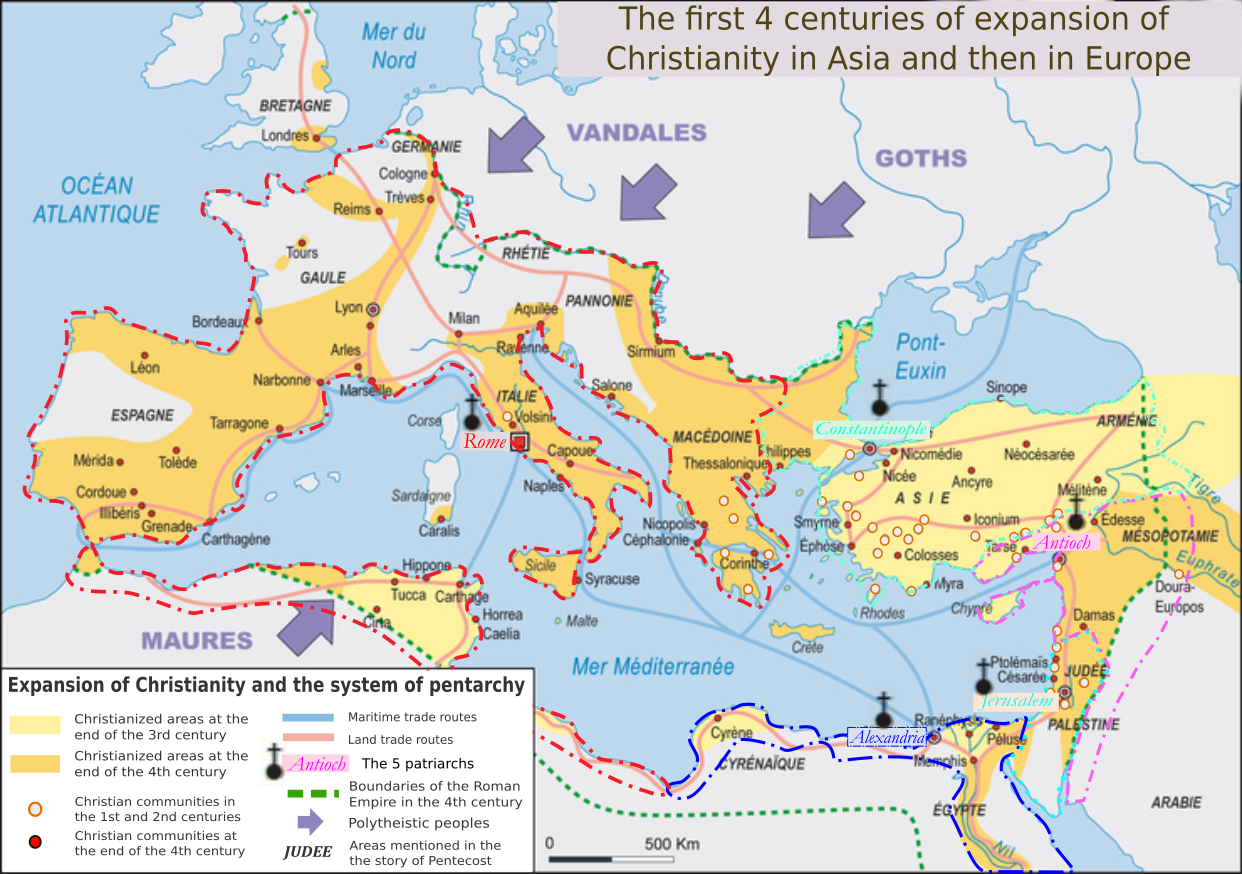 Expansion of Christianity and the Roman imperial organisation.

But even more serious than its banishment from the sacred space, beer concentrates all the negative aspects that religion attributes to the fermented beverages. Christianity, which became the official religion of the Roman Empire under Constantine 1st (r. 306~337), reinforces the banning of beer on the side of the unclean and paganism. The beer versus wine polarity was consolidated during this period in Mediterranean Europe. This first phase of Christianisation came to an end around the 5th century with a majority of Christian communities concentrated in the eastern regions of the Roman Empire.

The Christianisation of the ancient Western Roman provinces took place between the 6th and 9th centuries. As the Councils went on, the doctrine of the Christian Church was consolidated and unified by declaring all interpretations and practices not approved by the Councils to be heretical. The unique sacramental role of wine is reaffirmed each time, without possible exception, for all Christians, whatever their customs, climates, history or eating habits. The Christian Church wants to be One and united under the leadership of the 5 Patriarchates (Rome, Alexandria, Antioch, Constantinople, Jerusalem).

The Christianisation of Northern Europe undertaken from the 9th century onwards by the Carolingians was to exacerbate the opposition of the two main fermented beverages : the wine of the Christians against the beer of the pagans. Rome does not show the same religious tolerance as the other four patriarchs. But above all, the Roman ecclesiastical hierarchy preserves and even amplifies the eating and drinking habits of the Latin nobility: wine is the only honourable beverage, the Roman aristocratic drink. This strong trend within the Roman clergy had more influence on the marginalisation of beer than theological arguments.