The chronological congruences between social evolutions and archaïc beers ?

If the geography of the starchy crops roughly coincides with the location of the oldest traces of beer brewing, what about the chronology? 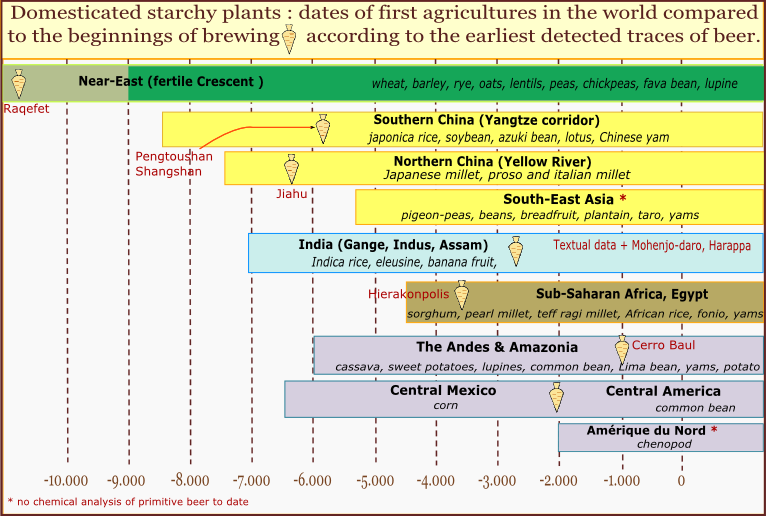 Timeline of starchy plants domestication compared to a late emergence of the beer brewing.

The chronological discrepancy is obvious, with the exception of the Near East where beer has been brewed at Raquefet before the domestication of cereals in the Fertile Crescent. Everywhere else, as we have already pointed out, the domestication of starch-rich plants does not imply the immediate beginnings of the beer brewing.

The contemporary cultural and technical contexts of the "first" beers were very advanced. The communities living in Jiahu, Gawra, Godin Tepe, Shahr-i Shokhta, Mehrgarh, Hierakonpolis or Cerro Baul were not at all primal societies. It can be assumed that the regular production of beer, which requires the domestication of starchy plants (otherwise no stocks are possible), also implies a long cultural and technical development, in order to ensure, notably, the social mechanisms regulating the production and circulation of the fermented beverages.