We conclude our world tour of "primitive" beers with South America.

The domestication of the teosinte (g. Tripsacum), ancestor of maize (g. Zea), began 6000 years ago in the humid valleys of southwestern Mexico (Rio Balsas). Morphological changes in cultivated maize prevent it from reproducing by self-fertilisation. Its spread depends entirely on man, not on spontaneous dissemination. There is a strong dependency link between the first domesticated maize varieties and the evolution of protohistoric Amerindian societies. Maize spread rapidly across the American continent, both northwards (Mexican plains, Rocky Mountains) and southwards (Central America, Andean Cordillera). This cereal will become the source of an important family of Amerindian beers: insalivated corn beers, malted corn beers, corn beers prepared with amylolytic ferments.

Does the domestication of maize have anything to do with beer? 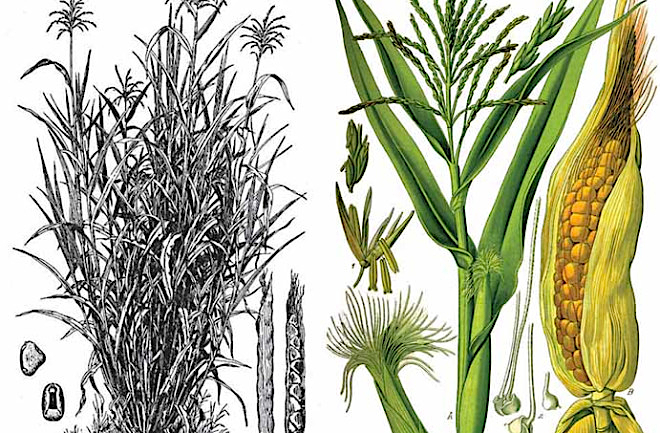 Science and archaeology provide some answers. Since domesticated maize and human cultivation are interdependent, following the food uses of maize means knowing the reasons for its domestication. Massive consumption in the form of carbohydrates can be detected thanks to the proportions of carbohydrate isotopes (14C) and nitrogen isotopes (15N/14N) accumulated in the skeleton: the former are found in plant foods, the latter in meat foods rich in animal proteins. Control skeletons exhumed from archaeological sites in Central America, taken at regular intervals over the last 6000 years, were examined. To the researchers' surprise, the changes in diet caused by the consumption of maize were not detectable until 2000 years after its actual domestication.

This is explained by the exclusive use, for 2000 years, of maize as a fermented drink, and not boiled flours or cooked cakes as one would expect. This is because alcoholic fermentation modifies the ratio 12C/14C and would explain the very low value of 14C measured in the contemporary skeletons of the first millennia of the domestication of maize. An alternative proposes that the fermentable sap of maize, which was very abundant before grain ripening, was the reason for its domestication rather than the harvesting of ripe grains. Here again, the sap ingested has little effect on the supply of 14C for humans.

In both cases, the production and consumption of fermented beverages would be at the origin of domesticated maize and the food base that would serve the cultural and material development of the great Mesoamerican and Andean civilisations, alongside tubers (potato, cassava, sweet potato) and pulses (beans, peas).

Once maize has been established as a food base, its use in beer making is not in doubt. A brewery discovered in 2001 in the Andes belongs to the Huari (Wari) empire which dominated northern Peru between 600 and 1000, more than 4 centuries before the foundation of the Inca empire. The installations are part of a vast cult complex built at the top of the Cerro Baúl, 600 m above the valley. Established on a trapezoidal plan, the brewery consists of corn malt (jora) grinders, 12 large vats of 100-150 litres to heat the wort, and remains of Shinus Molle, a variety of red berries with a sweet mucilage. This is a mixed drink, half corn beer, half wine of Shinus molle[1]. 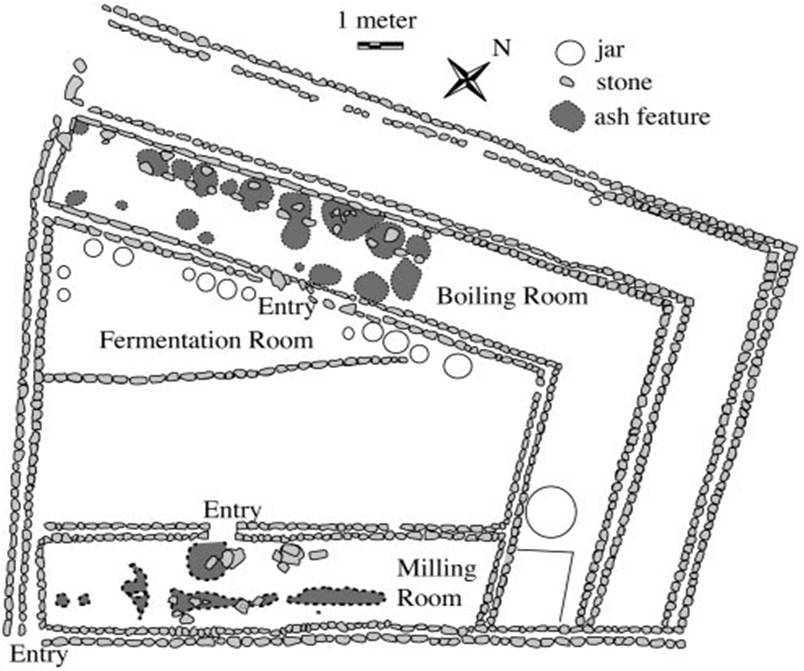 In Cerro Baúl, beer was produced on a large scale (1500 to 1800 litres per brew) for an elite of the Huari people. Numerous tupu pins found on the spot and typical of the women of the Huari aristocracy suggest that they made up the staff of the brewery. 15 m away from the brewery, a building equipped for ceremonial banquets delivered 28 keros from 0.35 to 1.8 litres. The keros are finely decorated red clay cups dedicated to the service of maize beer.

Another more modest brewery or brewing workshop (4x4 m) from the same period was discovered on the nearby site of Omo. This site belongs to the neighbouring cultural sphere of Tiwanaku. The Huari occupy the North of Peru, the Tiwanaku a region straddling Peru, Bolivia and Chile. These two competing Andean powers of the first millennium are developing brewing in the service of a warrior elite who collect their dues from the maize grains harvested by peasant communities. 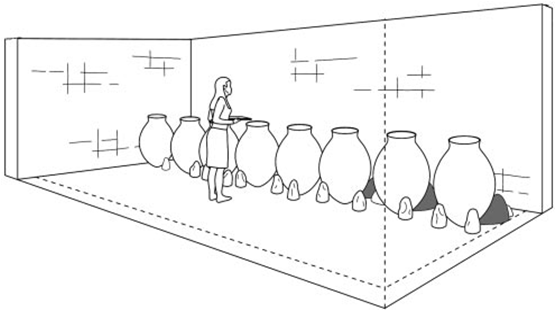 This does not mean that there is no beer brewing in the villages, but that there are no archaeological remains of such brewing installations. These villages were built of perishable plant material, unlike the centres of power built in stone for elites who could mobilise human and material resources. The rural site of Manchan in the North of Peru has fortunately preserved traces of the different types of habitat. Manchan was a regional centre of power (900-1470) controlling the coastal valley of Casma 400 km north of Lima. The later site of Manchan made it possible to understand that maize beer was used as a vector of exchange and barter between two classes of the population.

At Manchan, the residences of the Chimu elite built in adobe (dried bricks of clay and chopped straw) were next to modest rush constructions inhabited by the peasants and craftsmen of the city and grouped in barrio. This urban topography and these techniques allowed us to learn more about the brewing of beer carried out by the most modest Indians.

The Chimu elite don't just patronize parties in which beer is flowing. Throughout the year, they exchange more or less freely agreed chores (cultivating the land, making everyday utensils or pottery, ...) for a supply of beer. To do this, these elites draw from their corn reserves, granaries that have been filled by the work of the same peasants. The source of Chimu political power is the control or ownership of agricultural land. This power is effective when part of the population cultivates and harvests maize to fill the granary of the Chimu warriors or chief, a part of which is used to brew beer drunk by those who work.

These Amerindian data provide the evidence that maize beer and mixed fermented drinks played a decisive social and material role 4000 years ago in the Andes Cordillera. Recent archaeological data show that the patterns of production and consumption of maize beers are changing. The Tiwanaku and Huari patterns show an elite busy brewing its own beer, in a ceremonial a priori very restricted to them. The Chimu scheme, a little later, embraces the whole community in a general exchange: maize beer for field crops and labour.