Maize beer to rescue the messengers of the Inca empire

Maize beer to rescue the messengers of the Inca empire.

The control of the vast territory of the Incas rested on a network of roads and paths constantly travelled by the messengers of the empire, going from relay to relay, from fort to fort, from depot to depot. (maize, quinoa) or tubers (potato, manioc). This network enabled them to criss-cross the whole empire quickly despite the rugged terrain. The most famous of these roads is the " Qhapaq Ñan " long of 6000 km. Its main route joins the cities of Pasto in Colombia, Quito and Cuenca in Ecuador, Cajamarca and Cuzco in Peru, Aconcagua in Argentina and Santiago de Chile. It was a major element for the control of the empire and military movements. Lodges (tambos) every 20 or 25 km, guard posts and bridges were located along these roads, sometimes 7 m wide and sometimes paved. A secondary network of transversal roads, more than 45,000 kilometres long, connected the Qhapaq ñan to the coast and the Amazon basin.

« As it is shown by the Inca in all circumstances, and by men of strength as much as by women, their desire to fight in wars is found in the strength of the Chinchaysuyos Indians; although small in size, they are witty Indians, because they live on maize and drink maize chicha, which gives strength, while the Collasuyu Indians have little strength and spirit, they have a lot of fat, flabby bodies, and are of little use, because they only eat chuño and drink chicha made with chuño. » (Guaman Poma de Ayala 1615, Nueva Coronica y buen Gobierno, mms p. 336) 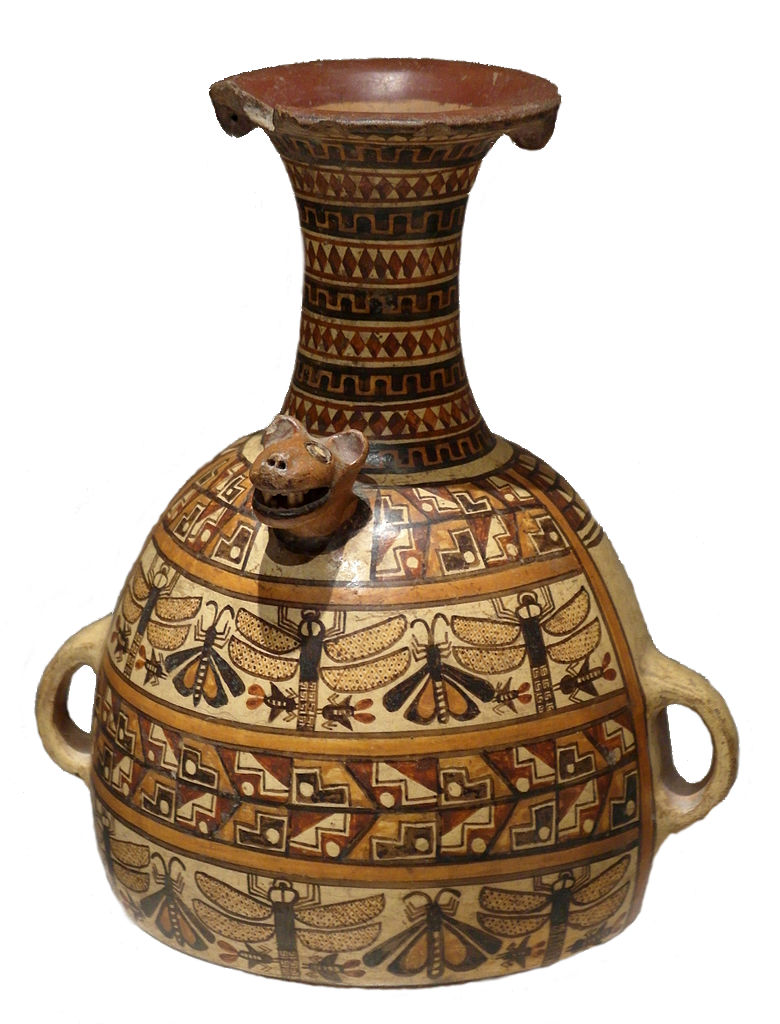 The maize beer (akha in Quechua) plays an economic and food role in this vast system. Supplying the empire's relay inns (tambos, which the Spanish took over from Quechua tampi) is an mandatory service to be paid for by the local communities. These peasant communities have to grow maize for the Inca, transform it into loaves and malt, and finally brew beer. Beside maize beers, the Amerindian peoples of the Inca empire know how to make beer from quinoa (Chenopodium quinoa), potato (Solanum tuberosum) fresh or dried (chuño in Quechua), as well as sweet potato (Ipomoea batatas) and cassava (Manihot esculenta) on the eastern Amazonian flanks of the empire. Maize beer was the main sort of beer supplied to imperial messengers, couriers, and envoys, however quinoa or potato beers were also brewed, depending on the seasons and local resources (see box). We focus our descriptions provisionally on maize beer alone.

There are two techniques and two kinds of maize beers in the Inca society. A beer based on partially unsalivated cooked maize dumplings (Spanish muko) is reserved for religious ceremonies and the intimate circles of the Incas. A second kind of beer is based on maize malt (Spanish jora) and maize semolina, roasted or not.

Malt and maize groats are two brewing ingredients from the long technical tradition of the Andean countries. They have a double technical benefit: a) they are dry and can be preserved and stored b) they reduce the actual brewing operations to a minimum (obtaining the wort by saccharification and cooking the mash). A 24-hour fermentation process produces a fresh beer. Thanks to this process, the beer from the innhouses set up along the imperial roads can be brewed quickly for the imperial envoys, administrative staff and soldiers who travel that roads of the vast empire in all directions all year round.

Regional centres have their own warehouses supplied with maize, beans, potatoes, fruit, small game, containers, clothing, wood, coal, etc. The archaeological study of 6 of these warehouses, in the region of Xauxa in central Peru, revealed the presence of plant remains typical of the Andean culture under the Inca Empire: maize, quinoa, potato, lupin and fragments of Inca storage jars[1]. These small circular buildings (ø 2-3 m) were part of a vast complex of 2,000 or more warehouses distributed among 52 architectural complexes in a single Andean valley. This demonstrates the importance and efficiency of the system of collection and storage of agricultural raw materials on an empire-wide scale.

A Spanish colonial text of 1582 notes a request from the Huancas Indians to the Spanish authority which diverted this economic organisation to its own benefit by demanding labour chores without reciprocity for the local Indian populations. This extortion of "free labour" deprived the local Indian chieftains of any authority. They explain why:

" [The Huancas were] ordered to tend fields of food and [to make] clothing, and maids were named for their wives; and native clothing and all [things] that they could produce were ordered put into storehouses, from which gifts were made to soldiers and to the lords and to the valiant Indians and to whom ever appeared; and similarly, it was ordered that those who worked in their fields and houses receive something from the storehouses. " [Vega 1965:169; translation from Spanish-English by T. D'Altroy, French by Beer Studies]..

These Huancas chieftains explain that the Spaniards and all the settlers who claim their power shamelessly draw from the warehouses for their own needs. In doing so, they misappropriate a collective wealth (the warehouses serve as security stocks for the local peasant communities), strip the Indians of the product of their labour, and deprive the local Indian leaders of all legitimacy.

Like the other Amerindians of the Andes, the Huancas kept track of everything that came in and out of the collective warehouses with khipu, coloured cords hung on a main rope serving as a chronological thread. The branching points marked the moment of events (entry, exit). The secondary knots represented the quantities, the colours and the nature of the product. This method allowed the lords Huancas to count in 1554 in front of the Audiencia Real de Lima what they had "given" to the imperial warehouses since 1533, the year of the Inca defeat in their region. Among the goods listed (in the order of reading of the khipu): gold, silver, cumbi (decorated cloth), blankets, maize, quinoa, potatoes, ropes, pottery, birds, firewood, coal, grass, straw, chicha (Spanish name for maize beer), fruit, salt and fish.

The testimony of the Huancas, confirmed by other sources of the time about the Mit'a (compulsory labour service), indicates that the imperial warehouses were also used to mobilise local labour for public and agricultural works, to maintain the military and administrative elite of the Incas and the local chiefs. The Huancas elites could fulfil this service for about twenty years without the Inca central administration decapitated by the Spaniards, because the local skills were strong and had been acquired for a long time.

But this well-ordered organisation will be almost systematically destroyed or defected by the Spaniards since they control, after several decades, almost all the former territories dominated by the Inca Empire. The lords Huancas, however allied to Pizzaro against the power of Cuzco, report that in mid-1540, the Spanish soldier burnt six granaries. The loss is: 3,099 hanegas of maize, 18 hanegas of quinoa, 370 hanegas of potatoes[2]. The total of 3.487 hanegas = 195 m3 for the 6 attics, i.e. 32,5 m3 per granarie. A large part of the maize stocks was transformed into beer throughout the year. In the Inca Empire, this beer was redistributed to the couriers and envoys of the Incas, to the local chiefs, but also to the rural communities of the valley in order to celebrate their feasts and collective agrarian rites.

The request of the Huancas also reveals that the Spaniards have taken the place of the Inca elite and its power relationships with the local communities.After the military defeat of the Incas, who drank beer, ate maize, took the gold and silver that the Amerindians continued to deliver to the warehouses? The Spanish soldiery of course, but also the Metis and the Amerindian chiefs promoted as allies and new local potentates.

The Inca imperial organisation, its road network and its abundant food reserves distributed throughout the territory will pave the way for the conquest of Pizarro and the fall of the empire. From Colombia, the smallpox epidemic preceded the Spaniards and spread like wildfire thanks to the incessant human traffic on the imperial roads[3]. Pizarro's 200 or so riders would not have reached Cuzco so quickly through the deep valleys of the Cordillera and the dizzying peaks without these well-maintained roads. They would not have fed so well on their journey without the granaries and Inca inns posted at regular intervals.

[3] Typhus (probably) in 1546, influenza and smallpox together in 1558, smallpox again in 1589, diphtheria in 1614, and measles in 1618 ravaged the Andes Cordillera and decimated more than half of its population (a low range). See next page for the historical sources of these figures.