Drinking beer together seals transactions made under oath.

Drinking beer together seals transactions made under oath in Mesopotamia.

The kudurrus are documents engraved in stone to keep track of the transfers of land by a group of sellers to individuals belonging to the social elite of a city[1]. The first kudurrus come from all Mesopotamia, except its southernmost part.

One of the oldest kudurrus is a pair of small objects carved in serpentine (or schist), one in the shape of a stylus, the other in the shape of a slab . They date from 3100-2900 BC and each object describes one aspect of the transaction[2].

The "stylus" mentions the sale of a « field of 5 bùr  (≈31 ha) from the (temple) of the goddess Nin-GIR.HA. RAD », taken from the land property of the sanctuary of this deity, situated near Urum, city identified with the archaeological site of Tell 'Uqair. Of the depicted standing up characters, we do not know who is the seller, who is the buyer.

On the "Plaque", the character on the right seems to take the oath that seals the sale in front of the emblem held out by the left character. 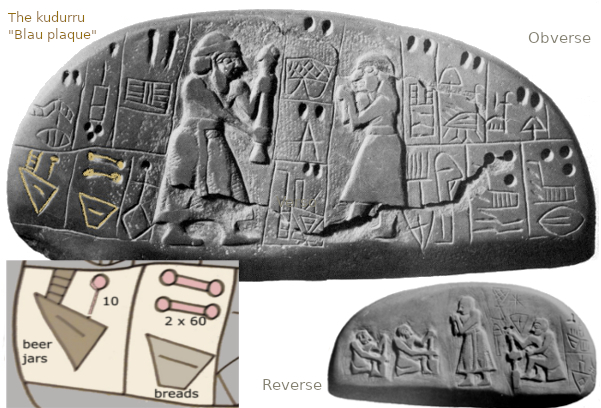 The slab (Fig. 1) lists the conterparts of the sold field :

The breads and the beer are counted among the counter-values in kind of the purchased field, just like slaves, money, vases and goats. But above all, beer and bread will be consumed at the buyer's home, during a closing party bringing together seller(s), buyer(s), witnesses and relatives. Drinking the beer together and eating the bread are not a mundane consumption closing a "commercial" transaction. These are symbolic gestures that seal the trust, the absence of ulterior motives, the truth before the god of justice Shamash. 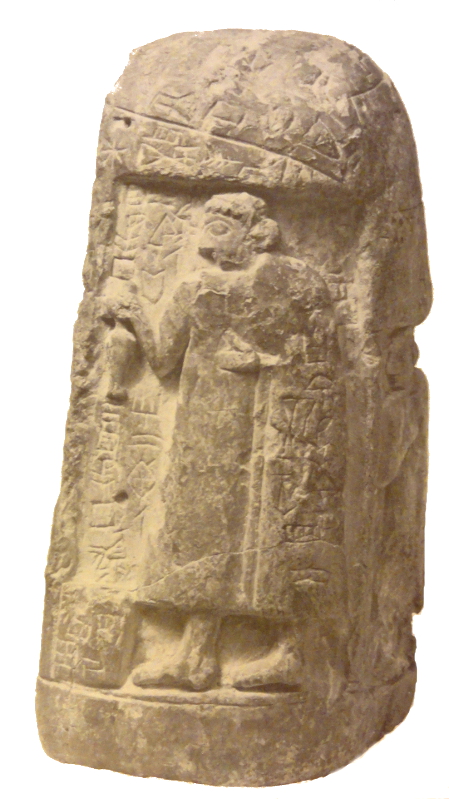 More recent documents provide some details on the ceremony: sworn oaths, anointing with oil, final sharing of bread and beer in the buyer's house. This is why the kudurrus are sometimes illustrated with scenes of food preparations: a person kneeling with a pestle in front of a mortar, vases, beer jars, baskets, animals, etc. On the stele of the Fig. 2, Ušumgal, the daughter of the priest offers her father a jar of beverage held out in her right hand, probably beer, with a basket at her feet. Her father is depicted on the A side of the stele, Ušumgal on the D side of this four faces squared kudurru.

The contract closing party has a ritual meaning. The reputedly indestructible stone of the kudurrus and their careful illustrations make each deed of sale a solemn moment, placed under the gaze of the gods. Intangible witnesses carved in stone, the kudurrus are kept in temples. In this context, bread and beer are not ordinary food and fermented beverage. Their sharing goes beyond simple collective food consumption to symbolically bind the participants. Buyer, seller, witnesses, and their descendants will no longer repudiate the sworn word. The participants are anointed with oil to purify themselves. The anointing is a divine blessing that prepares those who are going to make a sacred commitment.

According to these ancient kudurrus, beer is in Mesopotamia the special beverage of the important circumstances of social life. It cannot be reduced to this mudane drink, a simple complement to barley cakes. The ritual use of beer, glimpsed with the seals of Tepe Gawra, is of prime importance beside its alimentary purpose. Beer is also a symbol relating to fertility, agrarian rites, festive communions and therefore the rituals surrounding a solemn oath and the sealing of a transaction. This dimension is confirmed by the texts of the 3rd millennium concerning religious activities.

[1] I. J. Gelb 1991, Earliest Land Tenure Systems in the Near East : Ancient Kudurrus, Oriental Institute Publications Volume 104, pp 1-11. Some kudurrus are inventories, others are donations or lists of distributed goods. Some are written on clay tablets and not engraved in stone. Strictly speaking, Kudurru refers to the inscribed stones used to mark the limits of land ownership in the Kassite period (1595-1155 BC). By extension, it refers to older documents relating to land sales.