4 - The carob tree beer of the Amerindians in the 16th century. 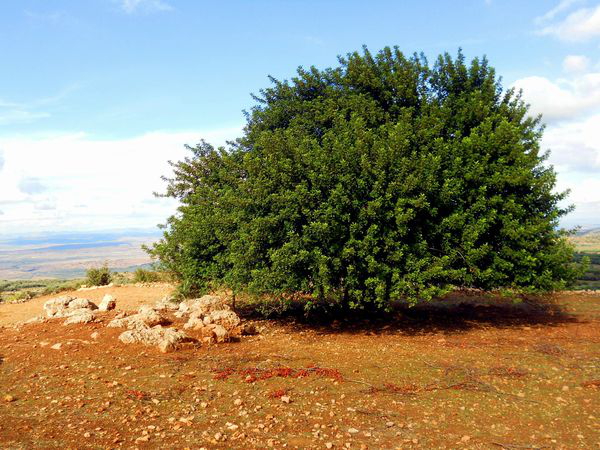 Before reaching the country of the Carios, the Spaniards have to go up the Paraná river, then Paraguay. The latter has its source in the Gran Chaco, the hot and dry country of the carob tree. There they meet the Amerindians Cueramaybas who, like many neighbouring peoples, know how to brew the carob beer, the emblematic tree of the region. 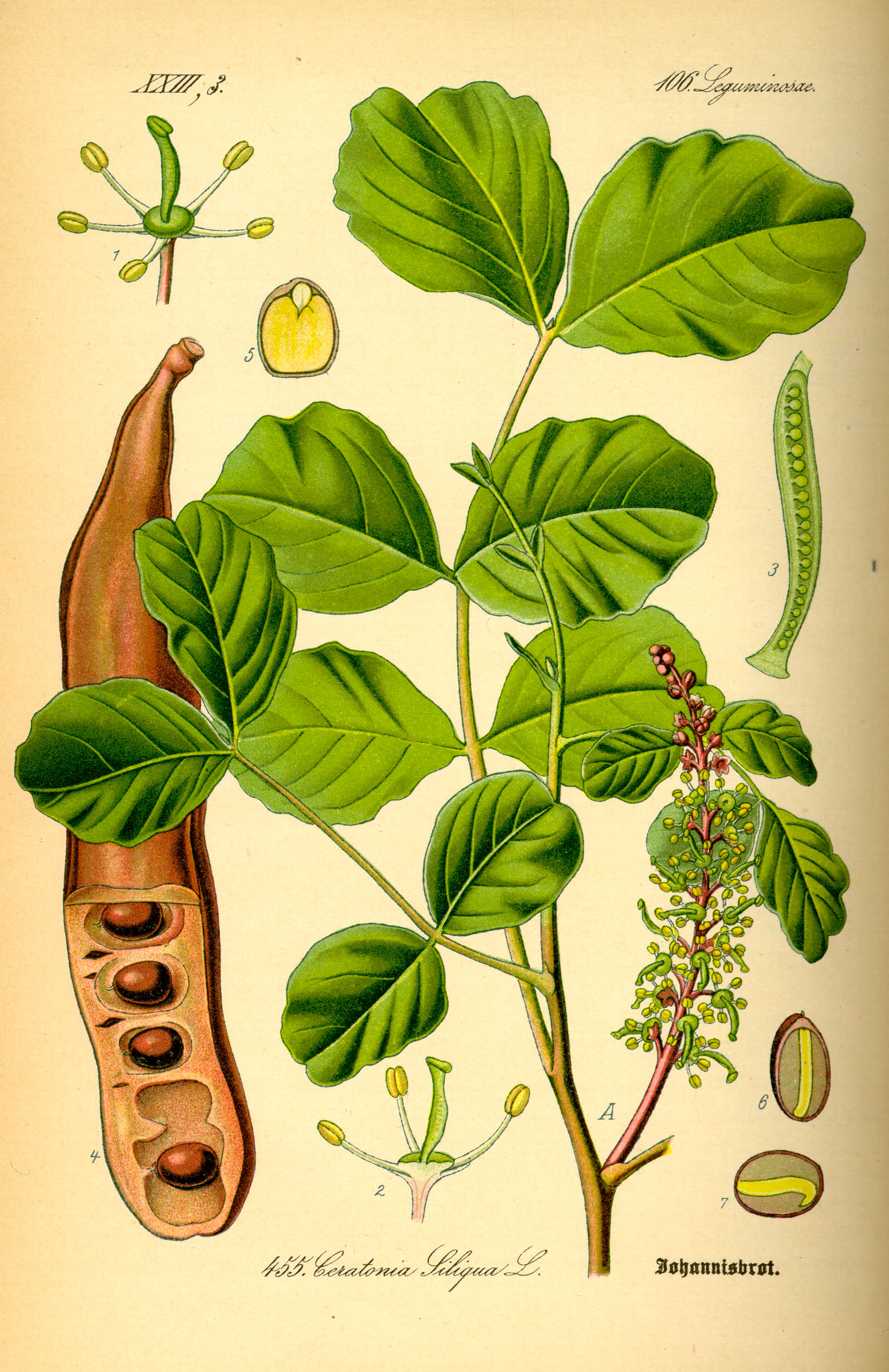 « After eight days of going upstream, we reached the territory of a crowded tribe, named Cuérémagbas, which feeds on meat and fish. They make wine [beer] with the juice of a plant which is called in German johanns brodt or bockhornlein [saint John's bread or goat horn[1]]. They welcomed us with the greatest kindness and provided us with everything we needed. » (Schmidel, Chap. XIX, Du fleuve Parabol [Paraguay], des indiens Cuéremaybas et Aygais. pp. 81-82)

The plant Schmidel talks about is the carob tree. The tree produces pods called carobs every year. When they are ripe, the pods contain floury beans. Dried and powdered, these carob beans produce a flour that keeps well. This flour is an ideal raw material for brewing beer.

How is carob beer brewed?

A first preparation mixes this flour with heated water. It turns into a sweet mash.

A second preparation allows another portion of flour to ferment spontaneously in bags. In both cases, the foam produced by a gum contained in the pods must be skimmed off, in fact a colloidal polysaccharide, the galactomannan.
When the two liquids are mixed together, a beer is made.

Schmidel does not give any technical details concerning the production of the carob beer. They can be found in the account that Auguste Guinnard gives of his stay between 1856 and 1859 with the Amerindians of the pampas, the Puelches. The latter lived much further south than the Cueremagas.

The Indians Guaycurus (Guaycurues) lived in the North-East of Asunción. During his stay in this newly founded city, Alvar Núnez, who leads the expedition, takes the time to observe them : 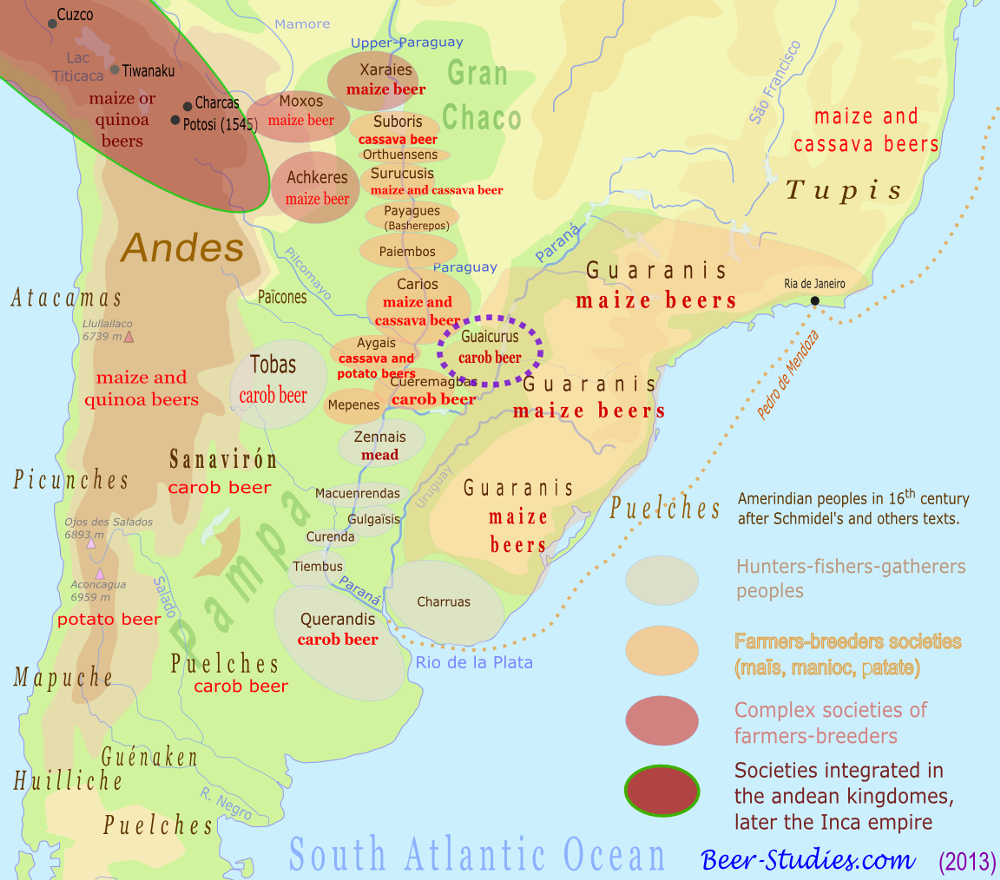 « These people [the Guaycurus] are very hardened and very brave; they all live on game, fat, honey, fish and wild boar; their wives and children have no other food. Every day they go hunting; it is their only occupation. They are so vigorous, so good runners, and their breathing is so strong, that they take the stags of the country in their hands. They hunt others with arrows, and kill many tigers [jaguars and panthers] and wild animals. They treat women very well, not only their own women, who are held in high esteem at home, but all women in general: when they attack them in war, they set them free and do them no harm. All other nations have a great terror of these Indians. They never stop for more than two days in any one place; they soon take their matted houses to one or two places from there, to chase after the game they have frightened. This nation, and others still living on fish, also eat a species of garoubes [carob pods] from the country. They go to the mountains to seek these fruits, where the trees that bear them grow, such as the wild boars [tapirs], which all go up to the heights at the same time. This takes place when the garoubes are ripe, from November to the beginning of December; they make flour from them and wine [beer] which is so strong that they get drunk with it. » (Commentaires d'Alvar Núnez, 122-123)

The nomadic life of these Indians, based on hunting and gathering, does not allow any agriculture, unlike that of their sedentary Guaranis neighbours, villagers and maize growers. Yet they know beer and how to brew it. But the carob beer of the Guaycurus Indians and their hunter-fishermen neighbours is by nature seasonal. The pods of the carob trees ripen between November and December. The brewing techniques are also adapted to a nomadic life: no brewing jars, no heavy and large storage pots. Instead, some skin bags and light material to crush the carob pods. The beer is neither stored nor carried. The entire brew is drunk on site.

The species of carob trees growing on the heights within the tropical forests differ from the pampas carob trees. It is impossible to know how these plant variations influenced the Amerindian techniques for brewing carob beer.

A Spanish expedition continues its ascent up the Paraguay River to the north of the country. The Paiembos live in the Gran Chaco, along the river. This typical society of the Gran Chaco is conditioned by its semi-arid environment which contrasts with the humid forests of Paraná where manioc and sweet potato grow. The carob tree tolerates hot, dry climates and lack of water well. It can produce its pods in the hot season, when the other species dry out under the sun. The Paiembos were quite naturally brewers of carob beer : 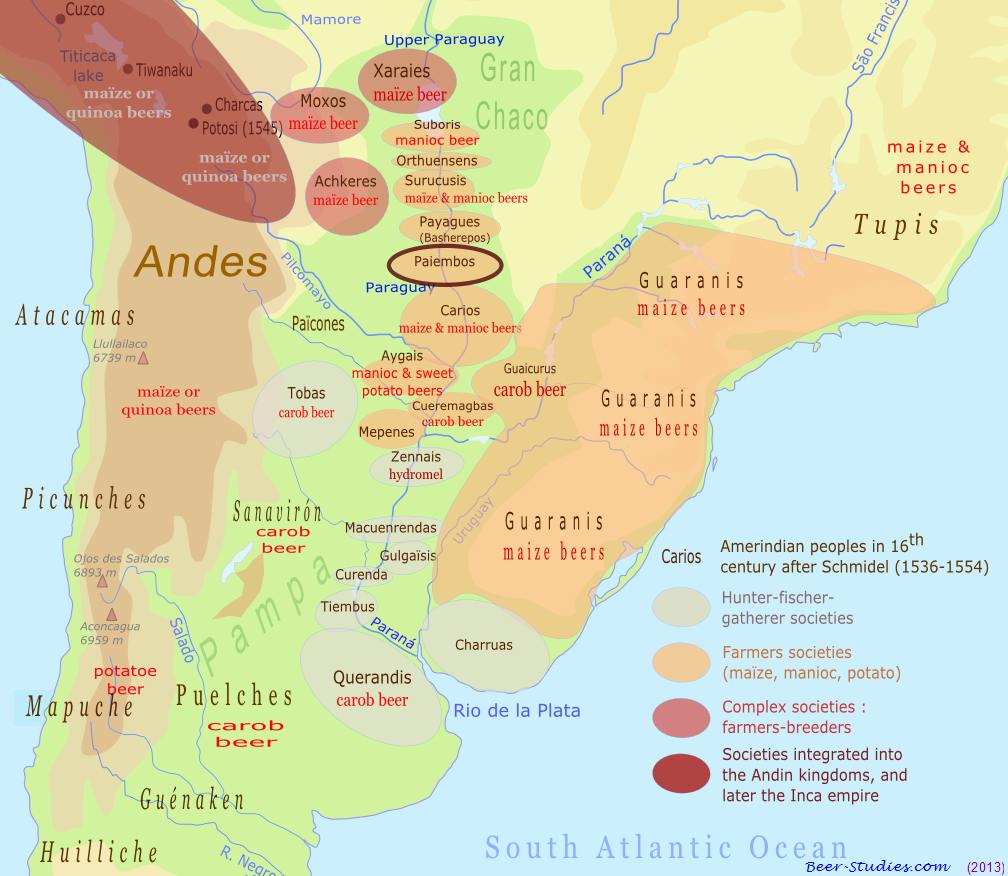 « We stayed six months in the town of Asunción to rest. Our commander asked the Carios, our allies, for information about the Paiembos nation; they replied that these Indians lived one hundred miles [400 km] from Asunción, up the Parabol river. Ayolas also inquired about their mores and customs, and whether they had much food supplies. He learned that they lived only on meat, fish, and a plant called algarobo [algarroba = carob], from which they made flour that they ate with the fish. They also prepare with this plant a fermented beverage, which has a sweet taste and is similar to mead. » (Schmidel, Chap. XXIII, Séjour à l’Assomption – Les Espagnols prennent des renseignements sur l’état du pays et continuent à remonter le fleuve, 100)

The situation of the carob beer in 16th century is as follows. It is brewed by all the peoples who live in the pampas, from the Gran Chaco in the north to the south of the Rio de la Plata. The region is covered with forests. A tree native to the region, the carob tree is particularly adapted to hot and dry regions. It provides a flour that keeps well and is used as a dietary supplement during the summer, when the lack of rain prevents the growth of maize or manioc.

It is likely that the technique of making carob beer dates back a millennium or more, when the Amerindian peoples inhabited the region en masse. But archaeological evidence is lacking. It is possible that maize farming, and cassava and potato horticulture, came later, the first coming from the Andean highlands, the second from the Amazon basin, with the peoples having migrated to the south of the continent. According to Schmidel's testimony, however, some maize- and cassava-growing peoples, from which they make beer, have not forgotten or abandoned the technique of brewing carob beer to make a seasonal fermented beverage when the carobs are ripe, once a year.

The situation described by Schmidel is unprecedented. It is rare in history for the same ethnic group to use several plant sources to brew its traditional beers at the same time, except in the event of a shortage. A traditional beer obeys a certain social codification, which is reflected in the brewing technique. Even though a beer can be brewed with any starch source, a society always favours one that is a sign of its cultural identity. On the contrary, it seems that among the Amerindians of Upper Paraguay and North-East Argentina, the abundance and diversity of beers was the rule in the 16th century.

[1] Schmidel knows the Carob Tree (Ceratonia siliqua), or Saint-John's (Baptist) Tree, Johannsbrot, in its European form originating from the countries around the Mediterranean. Every year, it produces pods (carobs) whose beans, once dried and then crushed, provide a fermentable flour, thus an ideal raw material for brewing beer.
Maize, cassava, sweet potato Amerindian beers in 16thArticle 4 of 6 Amerindian population density along southern rivers