5 - The population density of the Amerindian settlements along the rivers.

Until recently, it was estimated that there were between 300,000 and 400,000 inhabitants in the region covering what is now Argentina, Uruguay and Paraguay, at the time when the Spaniards went up the Paraná river, that is, at the beginning of the 16th century. This estimate, constantly revised upwards, is currently approaching 2 million Amerindians[1].

The archaeological excavations and the study of the environments formerly managed by man demonstrate two things: a) the population density was higher than was thought, b) the cultural and technical development of the Amerindian societies of the Rio de la Plata has been underestimated.

The population was supported by a highly productive agriculture based on maize, cassava and sweet potatoes. These plants were cultivated on developed fields, some of which were heightened and fertilized on earth platforms. The agricultural productivity was high. Schmidel speaks of two maize harvests a year for the people living along the banks of the upper-Paraguay river. These agricultural territories were collectively farmed by Amerindian societies that were both more complex and technically more advanced[2].

This question directly concerns the Amerindian brewery. If agricultural resources of starch (maize, manioc, sweet potato) were very abundant, stocks of grains and tubers were organised. This food abundance favoured the sedentary life of farmers gathered in villages. If a social hierarchy also existed, these stocks were used, among other things, to brew beer all year round. As a result, beer became a fermented beverage whose production and consumption depended on rules established to strengthen social relations, and not on the simple, primitive, natural need to drink. This is what we are trying to verify with the help of the testimonies of the time.

The banks of the Paraná and Paraguay rivers described by Schmidel and Alvar-Nuñez are a densely populated country. The further up the rivers they travel, the more villages multiply, especially in the upper reaches of Paraguay. The land is cultivated by the Carios and the Paiembos. Maize grows in the fields. Cassava and sweet potato are grown in the humid forests. These people of farmers and herders are settled along the rivers and their tributaries in villages of about 3000 souls built about every 20 km according to Schmidel. They practise hunting and fishing:

Under the command of Alvar-Nuñez, the Spaniards grouped together in the fortified village of Asunción are travelling up the Paraguay river. Schmidel never ceases to note the density of the population and the existence of numerous villages. Each one is home to several thousand Amerindians. In the villages of the Carios live on average 3000 inhabitants : 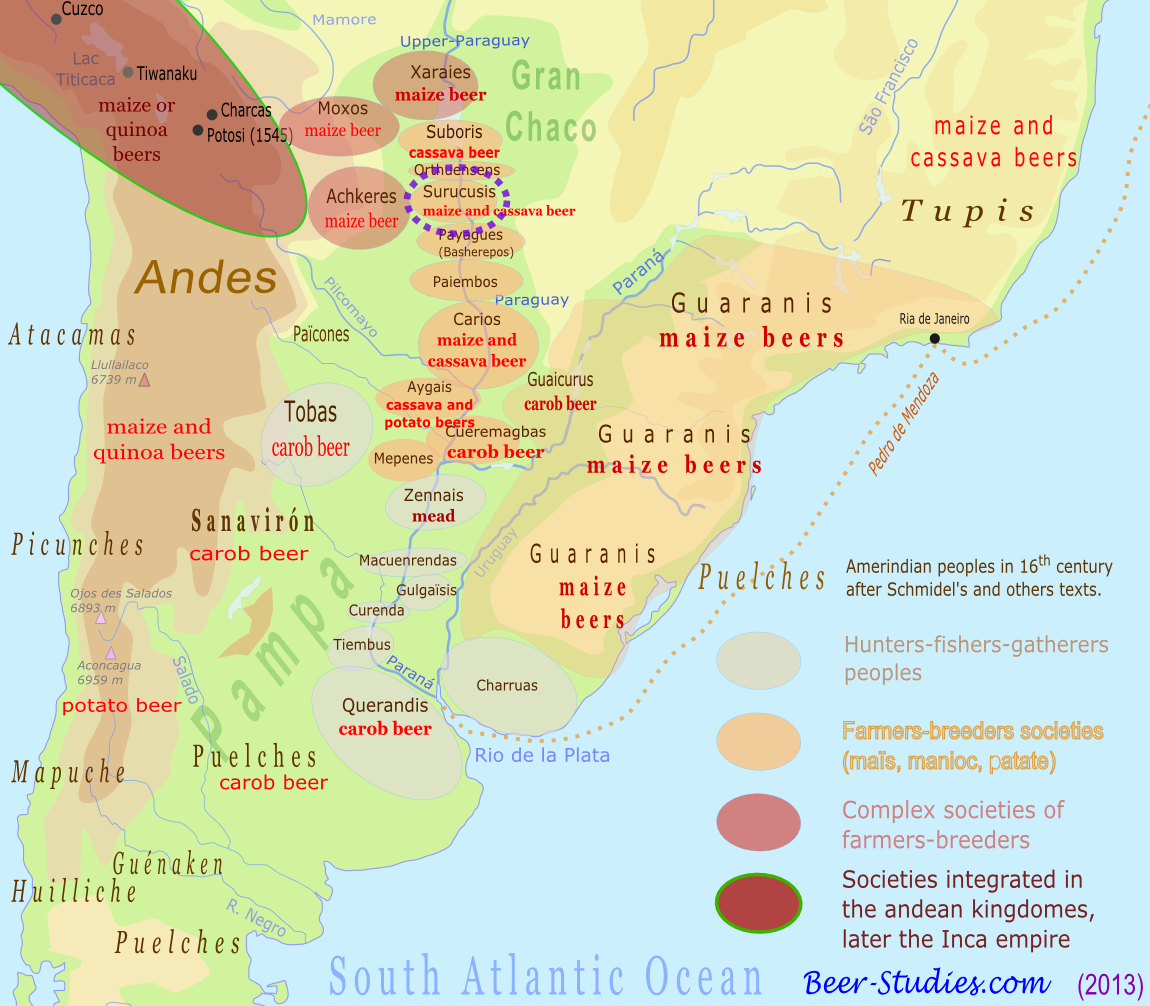 « They first came to a nation called Surucusis, which had a lot of maize, manioc, another root whose taste is similar to hazelnut and which is called mandu, meat and fish. The men go naked, and wear a blue stone on their lips the size of a Checkers token, but the women cover their natural parts.

The numerous food reserves of the Amerindians fed the soldiers (200 to 300 men on average) and horses, paradoxically facilitating the penetration and conquest of this vast territory by the Spanish. As an example, Alvar Nuñez tells that a fire devastated the enclosure of Asunción on February 4th 1543 (Comments, 216), reducing to ashes 5000 fanegas of maize harvested by the Carios and stored by the Spaniards in their stores, that is to say 275 m3 of grain. This figure gives an idea of what the soldiers consumed during one season and the agricultural contribution of the Amerindians to feed them with two harvests a year. 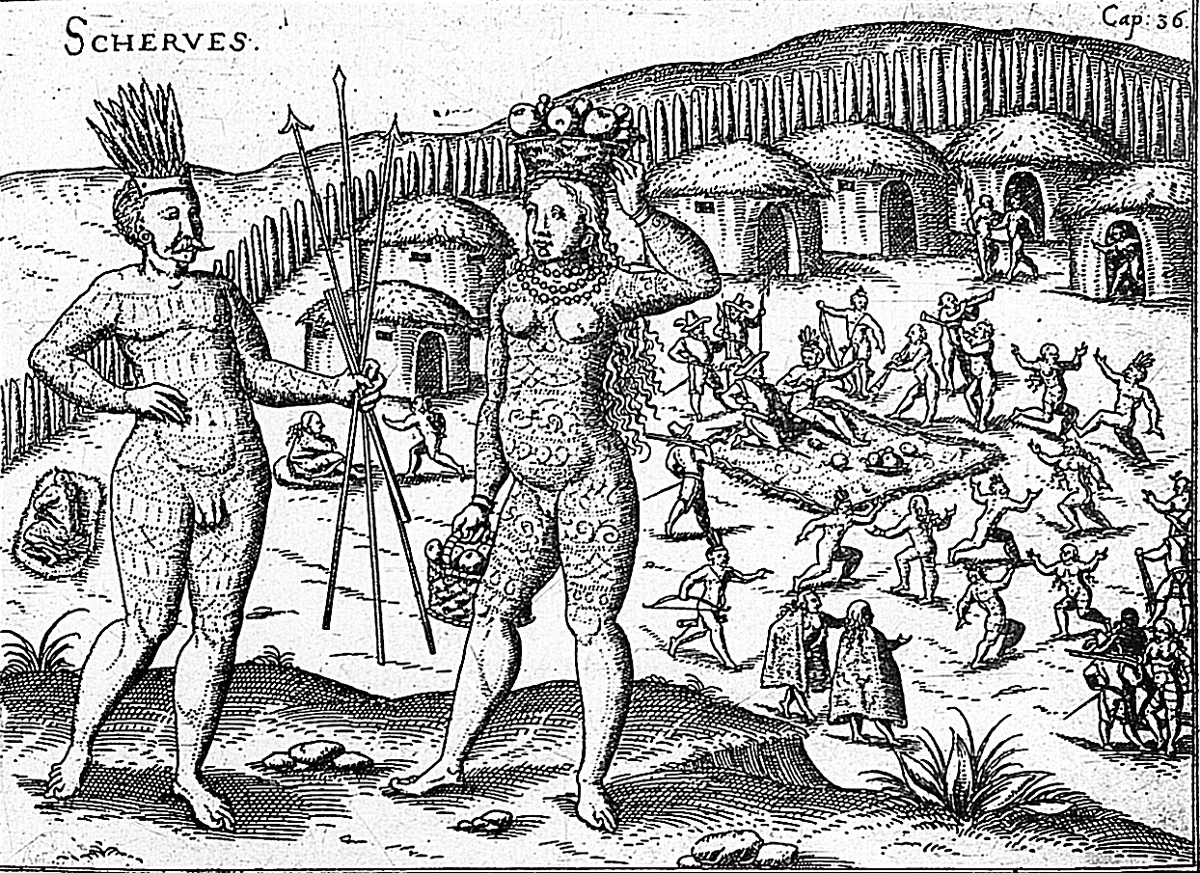 The Spaniards decide to go up the upper Paraguay River (Parabol) in search of the Land of Gold, which they locate somewhere among the Amazons to the north. After the Sherrues and the Siberis, they meet the Orthuesens. These peoples were in contact with the Amerindians of the Puña region, as can be seen from the gold plates they wore on their foreheads, which excited the greed of the Spaniards.

« The cacique of the Orthuesens gave our chief four gold plates and four silver bracelets. The Indians wear these plaques on their foreheads, just as in our country the great lords wear gold chains on their necks. Our captain gave him in exchange knives, scissors, rosaries and other trifles from Nuremberg. We would have gladly taken more, but we did not dare to do so because we were not strong enough. This nation is extremely numerous, and their city is the largest I have seen in India. The mortality caused by famine was, I believe, what saved us; otherwise we would have had difficulty in getting out of their hands. » (Schmidel, Chap. XXXVII, Description des amazones. – Nous nous mettons en marche pour aller à leur recherche. – Nous arrivons chez les Suboris et les Orthuesens. 162-163)

Schmidel describes numerous, sedentary peoples organised into large hierarchical communities. Among the Orthuesens, a ruler whom Schmidel calls a king is placed above the caciques or village chiefs :

« On the ninth day, at about eleven in the afternoon, we arrived at the city of the Orthuesans, and it took us almost an hour to cross it to reach the king's dwelling. A great famine was desolating the country: the locusts had twice eaten the crops and destroyed all the fruit, so that there was nothing to eat. » (Schmidel, Chap. XXXVII, 162-163) 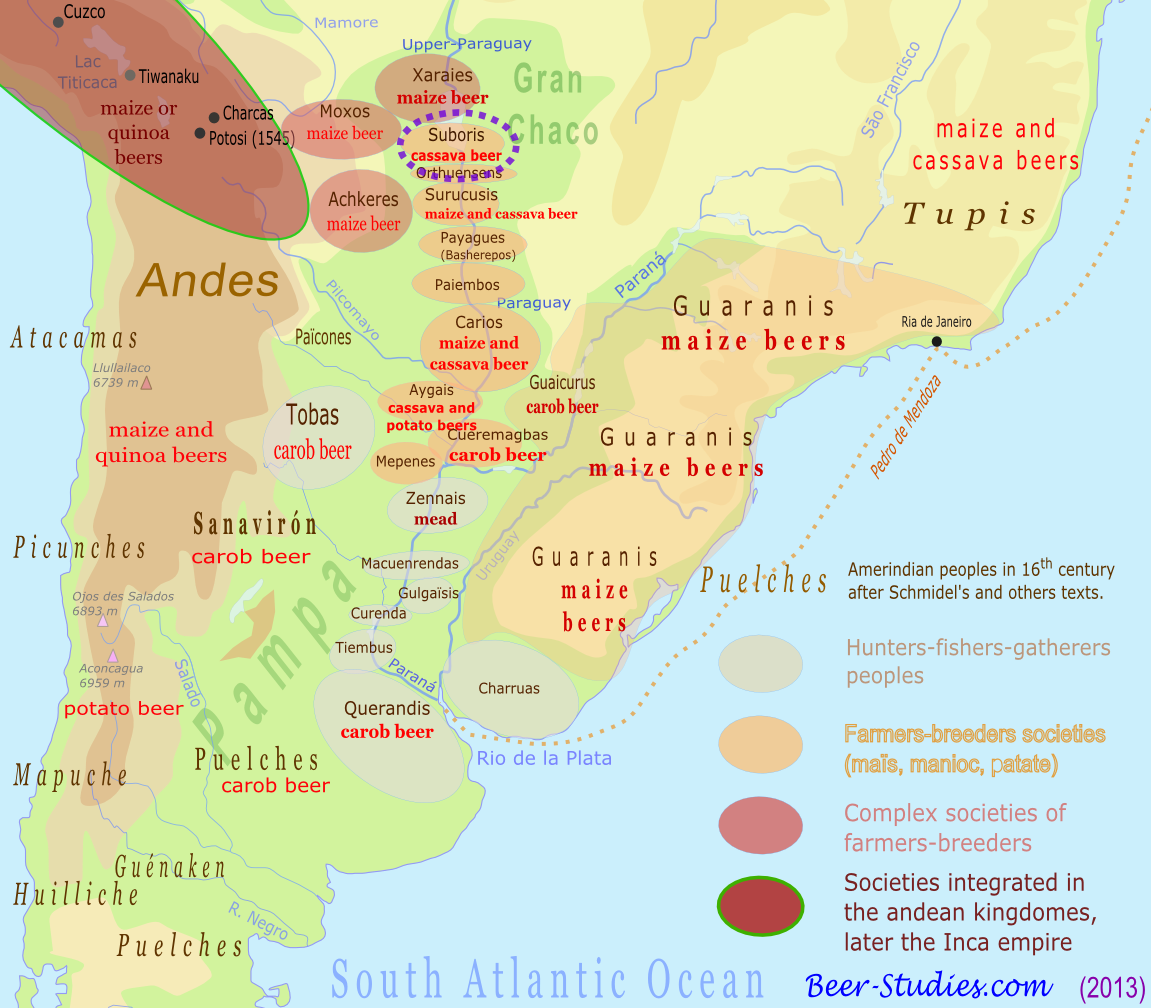 The neighbours of the Orthuesens, the Amerindians Suboris, make a manioc beer. According to Schmidel, its production seems to make up for a lack of drinking water:

« These Indians [Suboris] suffered a lot from the lack of water, because they know no other drink. As it had not rained for three months, they made a liquor [beer] by crushing, in a mortar, a root called mandepore [cassava]. The result is a white, milk-like juice. When water is available, it can also be made into a fermented beverage..

… There is no water in this country other than cistern water, and the Subori often go to war with other nations to obtain possession of it. » (Schmidel, Chap. XLVI, Des Barconos, Leyhannos, Carchconnos, Suboris et Peisennos. 207)

The travel upriver on the Paraguay is leading the Spaniards towards increasingly advanced societies. The village life of these farmer-breeders contrasts with the semi-nomadic existence of the hunter-fishermen living in the forests of the Rio de la Plata. The closer the Spaniards got to the Andes, the more beer became a frequent beverage, and the more this fermented beverage animated social customs (hospitality drink, ceremonial drink, common drink).

[1] Similar re-evaluations are underway for the population of the Caribbean islands before the arrival of the Spanish. The island of Haiti was populated by 8 million Taino Indians according to the latest calculations by Cook and Borah (Cook S. F., Borah W. 1971, Aboriginal population of Hispania, in Essays in Population History : Mexico and the Caribbean. Berkeley, University of California Press, Vol. 1, 376-410).
[2] Influenced by the summary descriptions of the conquistadors and their pejorative judgements justifying the enslavement of the Amerindians, they were described, and still are today, as primitive aboriginal tribes living off hunting and gathering, scattered over vast territories that they knew neither how to develop, cultivate nor defend. Schmidel's testimony is crucial on this point. The details he gives about the lifestyles of the Amerindians are not distorted by the ideology of the Conquista or censored by the Church of Rome, because Schmidel is published in a Germany (Franckfort-on-Main) already partly won over to the Protestant cause.
Carob beer brewed by the Amerindians in the 16thArticle 5 of 6 Beer and social complexity of Amerindians in 16th