Xhosa people and beer in Southern AfricaArticle 3 of 5 Selling the traditional beer among the Xhosa people.

The beer is drunk from metal or clay jugs with a capacity of 10 to 5 litres. The jugs are passed from hand to hand and lip to lip. Collective drinking excludes individual glasses. Drinking is done outside in the courtyard or in a house, never in the cattle pen (kraal) reserved for ceremonies and offerings of beer to the ancestors.

The place and grouping of guests depends on their clan and sub-clan. Each distribution is coupled with speeches, praises and prayers out loud that showcase the oratory skills of the guests (McAllister 201-225).

The meeting begins in the morning with the distribution of a pitcher of beer (10 to 7 litres) to the first comers to inform them of the purpose of the meeting (ibhekile yokwazisa, pitcher to let know).

The head of the household then offers pitchers of beer to friends, people who are to be honoured, pleased or cherished. His wife does the same with her friends or neighbours. This distribution of beer is called iminono.

He then hands over to a master of ceremonies (injoli) who belongs to the territorial section of the homestead. The one who had the beer brewed is no longer the one who will offer it. The beer meeting is a collective drink governed by the clan or sub-clan, not by the individual who invites. Tomorrow, he and his family will be drinking each other's beer, and he may be master of ceremonies. The laws of reciprocity and good spirit are above the desire of the individual's calculations.

The master of ceremonies distributes the pots of beer according to the neighbourhoods where the guests live, their age and their sex. Nothing can change this distribution. Guests who arrive later receive the "hidden beer" intended for this purpose.

The customs are the traditional pots of beer given to members of the hosting family: 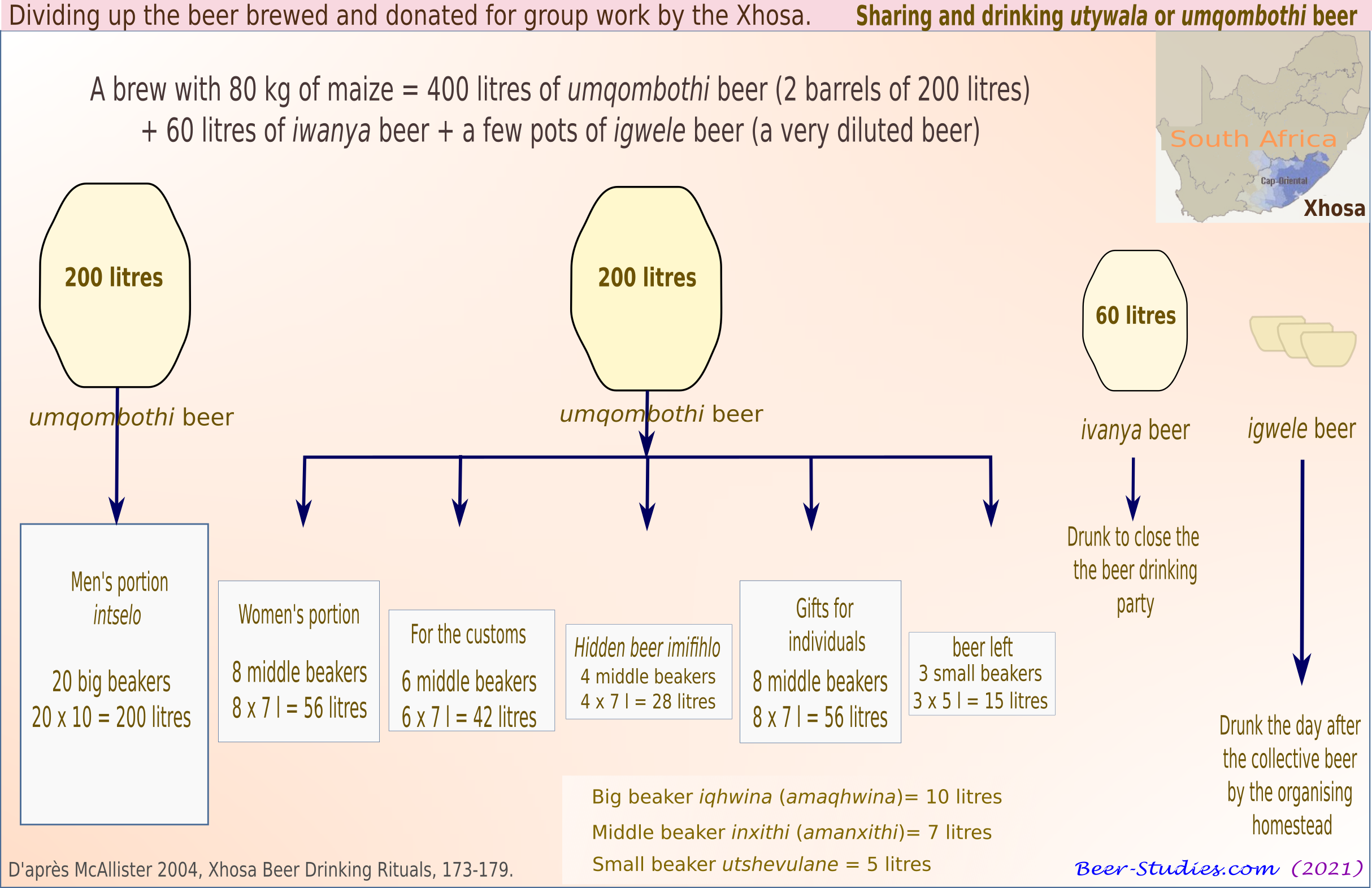 Customary distribution of beer pots during a Xhosa drinking meeting.

After the customs begins the main drinking (intselo). The pots of beer are distributed according to a rather complex practice (ukulawula) that takes into account the social order, age, gender of the guests. This distribution affects the physical place of the guests, the amount of beer offered, the order in which it will be drunk. Once the pots of beer are distributed, the meeting instantly changes from a reverent gathering where speeches follow one another in silence to a noisy and chaotic group where everyone moves around, drinks and deals with their daily business.

The beer meeting is closed when the master of ceremonies distributes the pots of beer-ivanya, a diluted beer brewed by rinsing the dregs from the umqombothi beer ..

During agricultural works, beer is distributed in the fields and drunk on the spot. This collective drink has a particular name: umgqibelo. Its distribution is nevertheless governed by customs and differences established within a clan, according to social status, age or gender. The women brew the beer, the elder men who organise the collective work (clearing, ploughing, harvesting,) preside over the distribution of the beer. Beer retains its original dual function: drinking and eating at the same time. Neighbours who have not worked are admitted to the sharing which takes place on the spot. They are likened to the porcupine, the animal that visits the gardens without having worked in them. This custom shows that beer does not play the role of a wage in kind or a reward.

The distribution of beer by men is not an absolute rule. Some collective agricultural works are done by women (cutting grass and reeds to cover houses, weeding). The beer is then distributed among them by women. After agricultural work has been carried out by young men, the women may divide the beer among them (McAllister 230).

Xhosa people and beer in Southern AfricaArticle 3 of 5 Selling the traditional beer among the Xhosa people.