Home > Exploring the historical time-space of beer > West Africa > Traditional beers of the Dogon people in Mali > Beer amongst the State-less societies > Bars and cabarets in the Dogon country. Mali.

Article 1 of 5 Progenitor of Dogon cabaret and lineage constraints

Bars and cabarets in the Dogon country.
An individual or communal drinking ? [1]

Recently, several Africanist historians have rightly criticised the propensity of their anthropological colleagues to idealise the ''traditional beverages" and to demonise - or ignore - the ''modern'' spirits and urban drinking patterns (Ambler and Crush 1992, Akyeampong 1996, Willis 2002). In fact, most French anthropologists have, for the most part, excluded bars and beer bottles from their fields of research; they have rather focused their studies on artisanal beers or palm wine, analysing these beverages from the point of view of social ties. Until the mid-1980s, Anglo-Saxon researchers made the opposite choice while sharing the same prejudices: their numerous works on the new distilled alcohols were originally motivated by the fear of a growing and uncontrolled "alcoholisation" of African city-dwellers. Since the 1940s, many Anglo-Saxon sociologists and alcohol specialists have argued that alcohol consumption aggravates the phenomena of anomie and acculturation.

This theory, borrowed from Horton (1943), was quickly applied to the African continent, especially to the townships of South Africa or the cities of Rhodesia, thus opening the way for restrictive laws on "indigenous alcoholism" and leading, in fact, to a "separate drinking" between whites and blacks. The title of an article by Hutchinson sums up this theory perfectly: "Alcohol as a Contributing Factor in Social Desorganization" ([1961] 1979). The author wants to demonstrate that the new modes of alcoholisation of the Cape Bantu have destructured their society, whereas traditional beer consumption was once a factor in social cohesion. However, this distinction between harmful and beneficial ways of drinking reflects fairly well the utilitarian conception that permeates most Anglo-Saxon studies until the early 1980s. African alcoholic beverages are reduced to their "integrating" or "disintegrating" functions and are therefore seen either as a social scourge, a source of disorder and acculturation, or, on the contrary, as a "lubricant" required for social cohesion.

Today, many anthropological studies on drinking are still influenced by this functionalist model and by this Manichean opposition between, on the one hand, deleterious urban drinking synonymous with individualism and, on the other hand, communal village drinking synonymous with order and solidarity. But the reality is obviously more complex, as I will try to show through an example taken from Mali. In Dogon country, village cabarets - places where the millet beer is sold - have over time become spaces of individual freedom where everyone can distinguish themselves, putting on a show and escaping from restrictive relationships based on age or kinship. Conversely, the bars established in the rare Dogon towns favour a policed drinking style, or even a collective drinking style which, apparently, takes away all freedom from solidary drinkers, voluntarily locked up in a tight network of prohibitions. In other words, the village cabaret is today a source of conviviality but also of individuation, whereas bar drinkers, on the contrary, reconstitute tables or ephemeral societies governed by draconian rules. 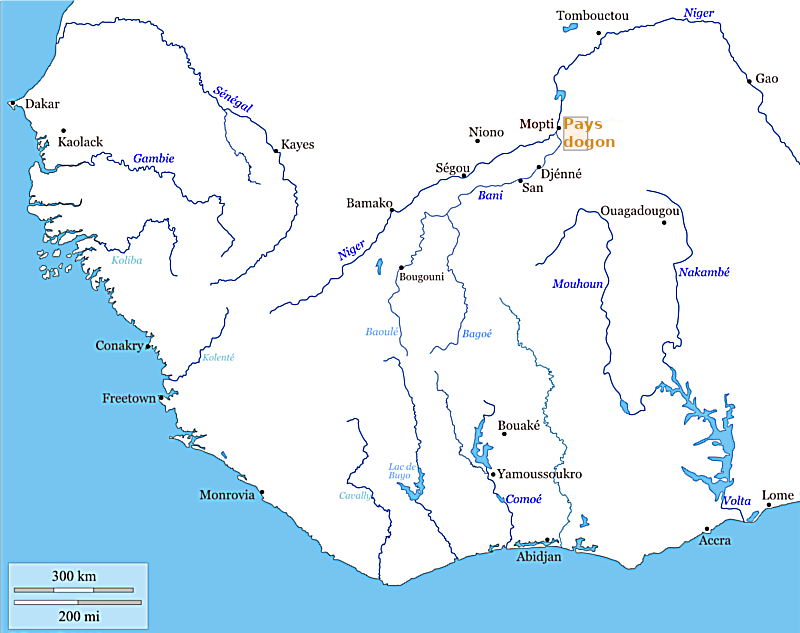 [1] This article develops an aspect of the Dogon drinking dealt with in Éric Jolly's book: Boire avec esprit. Bière de millet et société Dogon, Nanterre, Ethnology Society. It was originally published in Socio-Anthropologie, 15 (1), pp. 31-45.
Any reproduction in whole or in part of this article, including photos illustrating it, is subject to the express permission of Eric Jolly, his author. The publication of his article by Beer-Studies.com only authorises a redirection to this site via a hypertext link, without modification of title or author. By "article", we mean the 5 web pages that make up the full content of the article.
Link : https://beer-studies.com/en/explorer?geo=84&chrono=514&theme=249&article=256
This url matches the 5 html pages published by Beer-Studies (&article=256 to 260).
Article 1 of 5 Progenitor of Dogon cabaret and lineage constraints