The geographical congruences between agricultural cradles and early beer brewing.

The question is as follows.

Do the regions of the world where brewing originated in the earliest times overlap also the areas where the different starchy plants have been domesticated in the first place ? (map below)

The primary domestication areas of plant species refer to the regions of the globe where wild plants were first domesticated by man. There are 5 or 6 such areas, depending on the authors. In 1926, the Russian geneticist and botanist Nicolaï Vavilov unveiled the first map of the origin of cultivated plants, after having travelled around the planet, collected 150,000 seeds and specimens, and investigated the oldest agricultural techniques still practised at the beginning of the 20th century. He shows that wheat diversified in Persia and the highlands of Ethiopia, maize in the Andes. A prophetic and groundbreaking work. Vavilov's maps have since been modified by completing the world collections of plant specimens, and exploiting the ancient plant remains discovered by archaeologists. Molecular biology has explained some of the mechanisms that control the evolution of cultivated plants.

The map below only shows the domestication areas of plants with a high starch potential: cereals, grasses, tubers (manioc, yam, taro, potato) and dried fruits concentrated in starch. 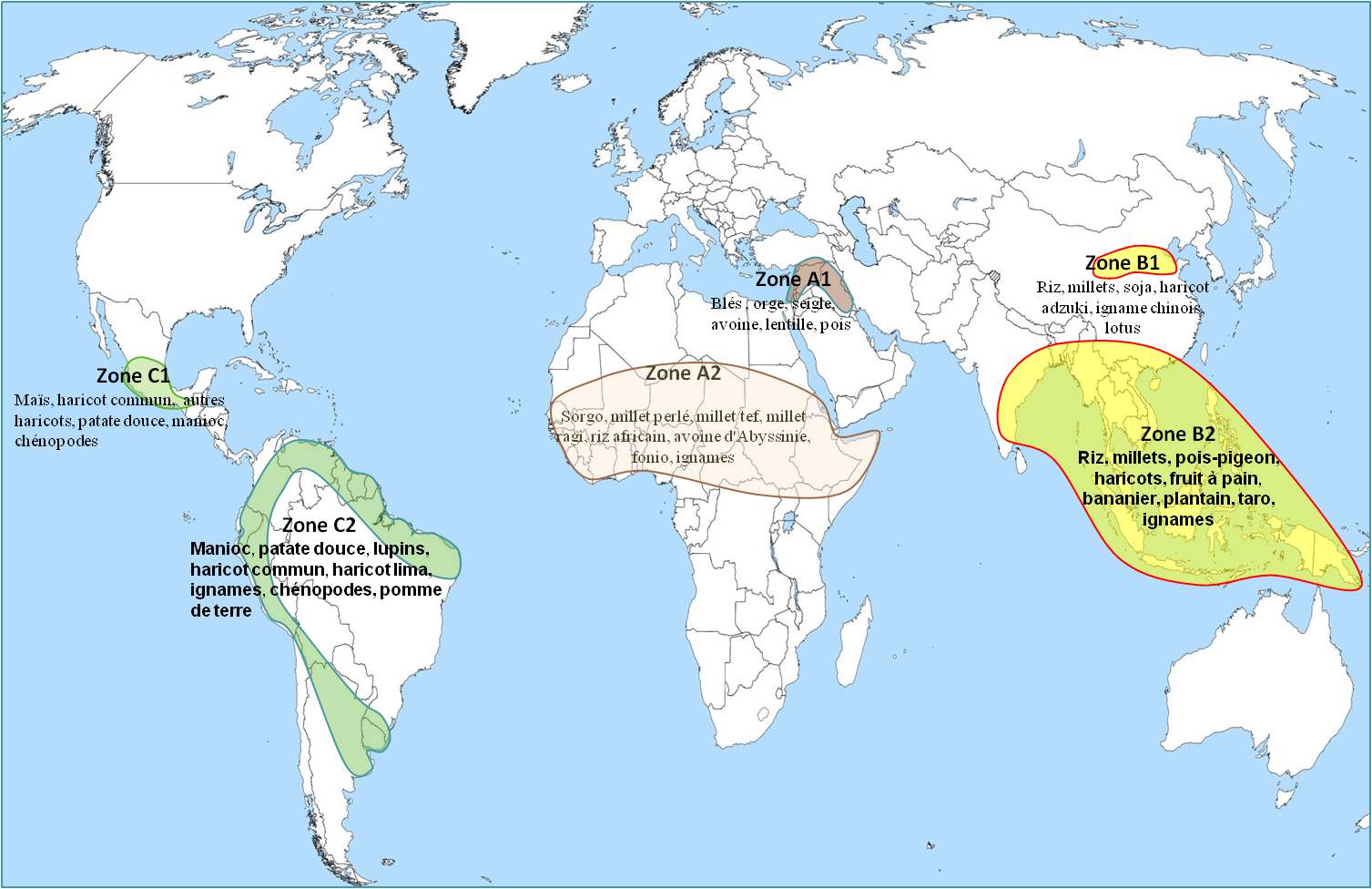 The cradle A1 (Fertile Crescent) covers the Near East, i.e. ancient Mesopotamia, and borders Iran, Turkey and Egypt. These regions belong to a very ancient basin for beer brewing ( Godin tepe ,  Shahr-i-Sokhta ). Egypt ( Hierakonpolis ) can be considered as a secondary beer brewing centre derived from plants first cultivated in the Fertile Crescent. This needs to be confirmed as ancient Egyptian texts speak of crushed water-lillies seeds being used in the composition of beer, thus a local plant from the banks of the Nile.

The cradle A2 covers sub-Saharan Africa for which the oldest evidence of beer brewing (Nubia, Sudan) does not go back beyond the second millennium BC according to Egyptian sources. Much can be expected from the nascent archaeological excavations in these regions.

The cradle B1 refers to the fertile Huang-he valley in northern China, where the Jiahu site (Jiahu) and other slightly more recent sites like Mijiaya and Dingcun are located.

The cradle B2 covers a very large area that some maps divide into two sub-regions: the Yangtze Valley and South-East Asia. We have no material evidence of beer brewing for these two regions in very ancient times.

The cradle C1 refers to southern Mexico and Central America. Here again, there are no direct evidences of the beer brewing in very ancient times. Archaeologists suspect the use of corn beer in connection with its domestication on the basis of indirect evidences.

The cradle C2, more extensive, covers the Andean Cordillera and the Guyana Plateau. Cerro Baúl is the reference site in Peru to date, which assures us that beer was brewed in this region 3000 years ago ( Cerro Baúl ).

Europe, it should be noted, is not a primary area for the domestication of starchy plants. Wheat, barley, rye, peas, broad beans, etc. are plants that came to Europe from the Near East with the migration of peoples or cultural borrowings. Europe cannot serve as a model for understanding the emergence of beer brewing.

Are there only 6 or 7 origin centres of beer brewing in the world?

The matter is more complicated. There is a chronological discrepancy, for each primary centre, between the first domestication of starchy plants and the appearance of the primitive beer brewing. In this time span, sometimes several millennia, the first grown plants have traveled and changed. The knowledge about the geography of domestication progresses, and with it the secondary areas of domestication are better understood. Two-row barley is cultivated in Pakistan from the 7th millennium BC. Rice cultivation spreads rapidly in India through Bengal and the Ganges Valley. Cassava spreads throughout the Amazon basin and the Cordillera from its cradle of domestication located in the today Bolivia and southwestern Brazil. One can therefore expect to find very old beer brewing "secondary" areas, far from the primary areas of domestication, for example in India, Central Asia, East Africa, Europe, the Amazon or North America.

In addition, some starchy plants that are nowadays considered minor food plants played an important dietary role in the distant past. Let's take three examples:

The carob tree and its pods full of seeds have been used to brew beer in South America, along the Pacific coast and in the Argentinean pampas (Carob Beer of the Amerindians of the pampas in the 16th century). This carob tree beer may have appeared with the first dietary uses of the carob seeds, which in fact belong to the category of domesticated plants.

The sago-palm served to brew beer in Southeast Asia. The starchy marrow of its trunk is an invaluable food resource for the local populations. Does its "domestication" coincide with sago beer, which has been documented since the 1st millennium in Chinese sources?

The use of starchy lily bulbs (Lilium sp.) to brew beer dates back 5500 years on the banks of the Huang-He River in northern China (Mijiaya). Was the lily cultivated and therefore domesticated for this purpose?