The Cultures of Mississippi from 10th to 16th century.Article 6 of 18 The Spanish in the Appalachians and the Southwest.

The accounts of the earliest Spanish, French and English explorations and colonisations provide only indirect information about the presence of beer before the first contacts. They teach us several things.

The first European settlers who landed on the Atlantic coast, used to the polluted waters of European cities, had one priority: to brew beer in order to drink a fermented beverage that was healthy and reputedly more invigorating than fresh water. From one colony to another, the raw materials varied. Colonies whose agriculture follows the European model (wheat, barley, oats, rye) brew their beers with these grains when they can be grown. Others adopted the maize and bean varieties grown by the Amerindians for brewing their beers. In Canada or along the Atlantic coast, the same scenario is repeated: the European settlers introduce the Amerindians to the art of brewing. There is no record of any Native American beers or brewing traditions on the Atlantic coast before the settlers arrived.

In the south of the American subcontinent, the richest Spanish colonists and the clergy favoured wine, while the others drank the indigenous fermented beverages that the Amerindians had been brewing for several centuries (2.1). But only the former wrote and left testimonies that all point in the same direction: contempt for the Amerindian populations and forced conversion to Catholicism. This is how we learn about indigenous beers made from maize or carob seeds and fermented beverages made from agave or various fruits, drinks that were made in the Southwest before the arrival of Spanish colonists.

In Florida, the story is less clear. The short French settlement near the mouth of the Mississippi in the Natchez country provides some evidence of Native American brewing of maize beer. The recurring question arises: did the Natchez and other neighbouring peoples brew beer before the arrival of the Spanish and French?

We propose a review of the first contacts in chronological order. 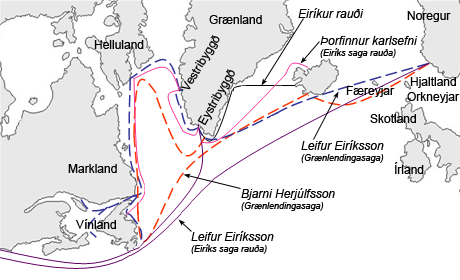 The Icelanders first around 985.

The Saga of Thorfinn Karlsefni (or Saga of Eric the Red) recounts the details of these discoveries and attests to the care taken by Norse sailors to sail with supplies of malt on board to brew beer and protect themselves from scurvy. The occasional more or less belligerent contacts with the natives of Greenland or Newfoundland, whom the Icelanders call Skræling, do not mention the latter's beverages. Berries, varieties of sarsaparilla and the wild vine (Vitis riparia) abound. Icelanders used to their deforested volcanic island call the country Vinland, "wine country" or "meadow country".

The Cultures of Mississippi from 10th to 16th century.Article 6 of 18 The Spanish in the Appalachians and the Southwest.