Home > Exploring the historical time-space of beer > North America > The Ameridian brewery in North America > Beer amongst the State-less societies > The Spanish in the Appalachians and the Southwest.

Amerindians and first contacts with EuropeansArticle 7 of 18 The French in Canada and Florida.

A first Spanish expedition led by Pánfilo de Narváez between 1527 and 1528 to colonise Florida suffered a dramatic failure. Only 4 survivors out of the 600 men managed to reach Mexico in 1536. Among them, Álvar Núñez Cabeza de Vaca recounts this expedition in 1537 when he returned to Madrid. Wandering in the southwest between the Rio Grande and the Rockies, they encountered what appeared to be Pueblos or Hopis living in villages. There they are offered carob flour. We know that the seeds in the pods of the carob tree were used to make beer. Núñez Cabeza describes how the Amerindians prepare the carob seeds to make flour, with a possible allusion to the fermentation of a beverage:

“They gave us a great quantity of the flour of mezquiquez. The fruit while hanging on the tree, is very bitter and like unto the carob; when eaten with earth it is sweet and wholesome. The method they have of preparing it is this: they make a hole of requisite depth in the ground, and throwing in the fruit, pound it with a club the size of the leg, a fathom and a half in length, until it is well mashed. Besides the earth that comes from the hole, they bring and add some handfuls, then returning to beat it a little while longer. Afterward it is thrown into a jar, like a basket, upon which water is poured until it rises above and covers the mixture. He that beats it tastes it, and if it appears to him not sweet, he asks for earth to stir in, which is added until he finds it sweet. Then all sit round, and each putting in a hand, takes out as much as he can. The pits and husks are thrown upon a skin, whence they are taken by him who does the pounding, and put into the jar whereon water is poured as at first, whence having expressed the froth and juice, again the pits and husks are thrown upon the skin. This they do three or four times to each pounding. Those present, for whom this is a great banquet, have their stomachs greatly distended by the earth and water they swallow. The Indians made a protracted festival of this sort on our account, and great areitos[1] during the time we remained.” (Nuňez Caveza de Baca 1542, Relaçion, Chapter XXVII. We moved away and were well received.)

It is difficult to identify the brewing of a carob beer from this description. But it does. This brewing technique is attested to in the 19th century among the Amerindians living along the Colorado and the upper Rio Grande (see ethnological observations infra). Did it already exist in the 16th century? Probably. The Ancestral Pueblos and the Hopi are sedentary, agricultural people who have inhabited this semi-desert region since the beginning of the first millennium. They brew maize beer, a fermented beverage valued in their rituals. However, carob pods are both a daily food and a substitute for maize in times of shortage or hunger between two annual maize harvests. Making beer from carob is a result of the severe agricultural constraints on Pueblo and Hopi societies. 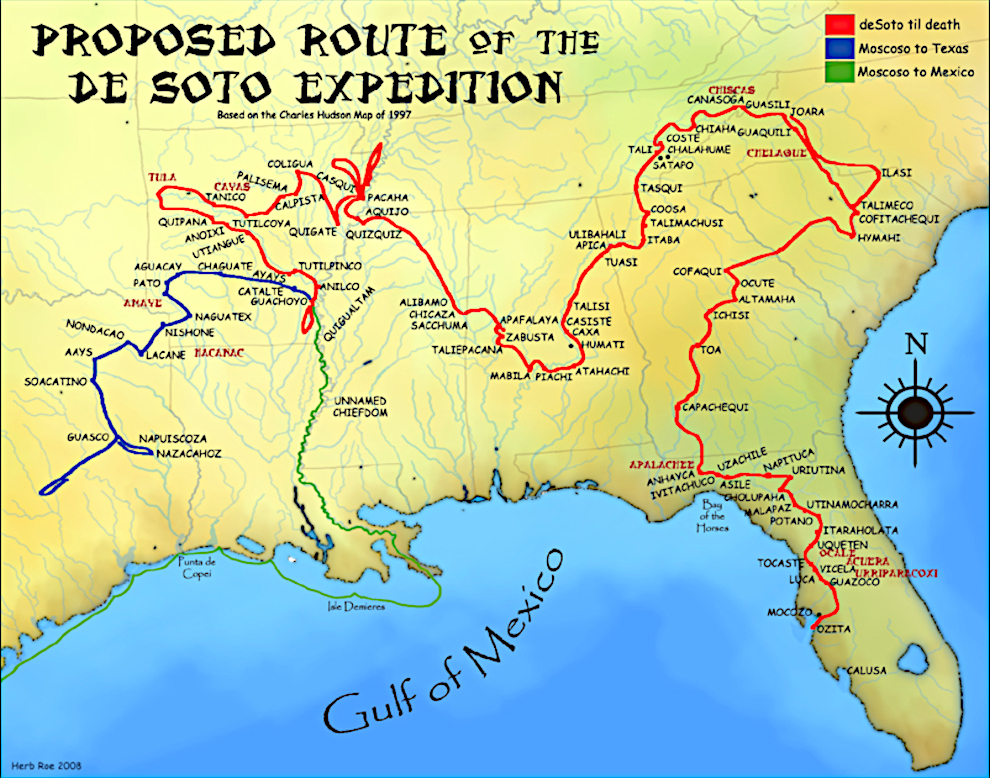 Hernando de Soto leads a new expedition to conquer Florida, where he lands in 1539 with 570 men and women and 213 horses. In the Appalachians he encountered developed Amerindian societies endowed with a political hierarchy. The caciques received quotas of maize, skins and cotton from other subjugated Native American tribes: “Beyond that place, a difference was seen in the houses, for those behind were covered with hay and those of Toalli were covered with canes in the manner of tile. Those houses are very clean and some have their walls plastered and appeared to be made of mud... Besides those houses they have others for summer with kitchens nearby where they build their fires and bake their bread. They have barbacoas in which they keep their maize. This is a house raised up on four posts, timbered like a loft and the floor of cane. The difference which the houses of the lords or principal men have from those of the others is that besides being larger, they have large balconies in front and below cane seats resembling chairs; and round about many large barbacoas in which they gather together the tribute paid by their Indians, which consists of maize and deerskins and native blankets resembling shawls, some being made of the inner bark of trees and some form a plant like daffodils which when pounded remains like flax.” (The De Soto Chronicles, Vol. I, 75).

The huge Spanish column passed through landscapes covered with maize fields and wintered in 1539-40 among the Apalache Indians in the fortified city of Anhaica, which has 250 long houses. Its population is estimated at 30,000 and its province at around 60,000. Anhaica was rediscovered in 1988 by the archaeologist Calvin Jones. The Amerindians served the Spaniards a porridge made of maize flour sweetened with sugar or honey. Such a slurry, which the Spaniards call mazamorra, is a perfect basis for a thick fermented beverage. The text does not mention it as such, because Spanish authors were used to strongly discriminate between solid food and liquid drink, but the Amerindians were not.

“All these past days since they departed from alongside Tali, the cacique of Tali made [the Indians] bring out, from their towns along the road, corn and mazamorras and cooked beans, and everything he could.” (The De Soto Chronicles, Vol. I, Rangel’s Account of the Expedition, 282 and 284). It should be noted that for the Spaniards, mazamorra was not only a porridge but also a beer brewed by the Nicarao and Chorotega people of Nicaragua with ground maize and honey. The word mazamorra is given by Oviedo y Valdés in 1526 with this double meaning[2]. The peoples of the Andean Altiplano were already preparing mazamorra de papas with tocosh flour, a product of the fermentation of potatoes or oca (Oxalis tuberosa) before colonisation[3]. So here again a food halfway between beer and fermented soup. Rodrigo Rangel's account was co-authored with Oviedo y Valdés, who included it in his Historia general y natural de las Indias (L. XVII, cap. 21-28). The latter uses the term mazamorra knowingly[4]. Appalachian mazamorra may be related to the sofkee (or osafke) of the modern Creeks (Muskogee) and Cherokees in 19th century, a sour maize beverage that may be fermented, hence an Amerindian beer.

The Chronicle tells us that the Spaniards taste grapes as good as those from Spain, without saying whether the Amerindians make wine from them. Having lost their supplies of wheat bread and grape wine, the Spaniards wondered whether they could make some with maize to celebrate mass and finally gave up: “Thenceforth is was impossible for them to hear the mass because they did not have the material of bread and wine for the consecration of the Eucharist, though the questions in theology were raised among the religious and secular priests as to whether or not they could consecrate bread made of maize… is that the bread shall be of wheat and the wine form the grape.” (The De Soto Chronicles, Vol. II, 353-54). A theological debate in the midst of the Appalachians which shows that the Spaniards knew in 1540 the Amerindian techniques for making bread and beer with maize.

In 1540-42, Francisco Vázquez de Coronado set out with a troop of 340 Spaniards, 300 indigenous allies and a thousand Indian and African slaves in search of the mythical city of Cibola, which, according to Friar Marcos de Niza, was rich in gold. Along the Gulf of California, in the Sonora and Suya valleys in the north of present-day Mexico: “The greatest festivals are on market days... At these times they all get drunk.” And “They drink wine made of the pitahaya [the flower of a cactus Hylocereus undatus], which is the fruit of a great thistle which opens like the pomegranate. The wine makes them stupid.”[5].

Idem with the tunas, the fruits from the cactus Opuntia. “The pitahaya is a giant cactus found on the high tablelands of the Gila and on most of the high plains of this whole region. It bears a fruit about the size of a hen’s egg, green in color, tinted whit red. When ripe, the fruit bursts, exposing a pulp of mawkish taste. The sun dries this to about one-third its size, when it drops out of its covering. It is then of the consistency of a dried fig. The Pimas and some other Indians collected these pulps which they rolled into balls and boiled to the consistency of molasses. The fruit and its juice were also fermented in various way for beverage purposes.” (Cherrington 1925, 6)

[1] An areito, or areyto, was a dance ceremony of the Arawak Indians of the West Indies in which their traditions were recounted in chants. Like buhio, the word was now carried to the continent.

[3] The various kinds of Amerindian mazamorras were altered with Hispanic colonisation by adding spices and sugar until they became a dessert in modern times, without any trace of alcoholic fermentation and liquid connotation of a drink.

[4] The Spanish text and the note « Maçamorras es los mismos que puches ó poleadas » (Maçamorras is the same as slurry or porridge). http://www.cervantesvirtual.com/obra-visor/historia-general-y-natural-de-las-indias-islas-y-tierrafirme-del-mar-oceano-primera-parte--0/html/014747fa-82b2-11df-acc7-002185ce6064_662.htm and next page.

[5] Relacion de la Jornada de Cibola conquesta per Pedro de Castaneda de Naçera in The Coronado expedition, 1540-1542 - Studies and translation by Georges Parker WINSHIP 1896. Part II, CHAPTER I. Of the province of Culiacan and of its habits and customs. Chapter II. Of the province of Petlatlan and all the inhabited country as far as Chichilticalli. pp. 514 et 516.  archive.org/details/coronadoexpediti00winsrich

Amerindians and first contacts with EuropeansArticle 7 of 18 The French in Canada and Florida.