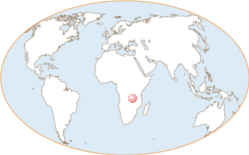 Munkoyo is a traditional beer brewed following an original brewing method in Zambia and in the Democratic Republic of Congo, in the province of Shaba (formerly Katanga). To saccharify the starch of sorghum, finger millet, maize or manioc, the brewers use certain roots that can rapidly saccharify the starch in a liquid medium, thanks to the specific enzymes generated by these roots.

This extraordinary biochemical power aroused the interest of scientists as early as the 1950s, first botanists, then biotechnologists.

Dany Griffon is one of them. Working in Lubumbashi (Zaire, now the Democratic Republic of Congo, D.R.C.), he initiated a cooperative research project in 1973 to improve agri-food technologies based on local traditions. The techniques for brewing munkoyo beer provide an ideal experimental ground. These amylolytic African plants represent an alternative to the use of barley malts, which African countries imported at great expense from Europe to brew industrial beers at that time. Large-scale cultivation of these plants, an industrial brewing scheme based on African techniques and products could be developed. This is the aim of the research undertaken on site by Dany Griffon. 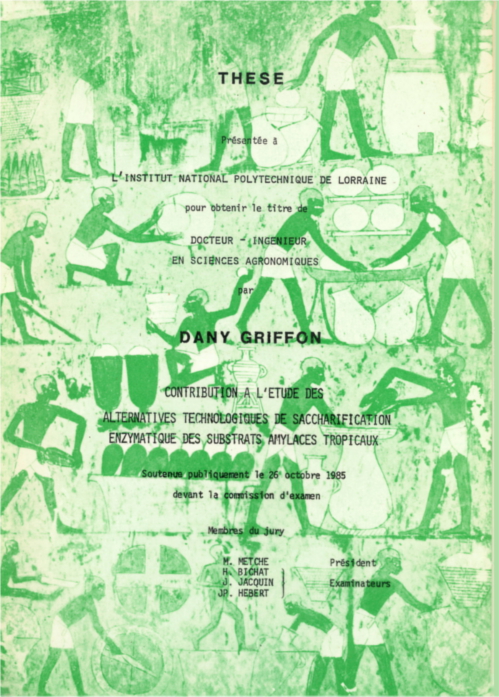 Defended in 1985, his dissertation resulted of his work at the University of Nancy. Beer-Studies gives it online with the kind permission of his author.

The interest of his thesis goes far beyond the study of an agro-food technological alternative for an emerging African country[1]. The identification and study of the Munkoyo brewing technique opens a new window on the great history of beer in the world. There are three main reasons for this.

The use of amylolytic plants is identified as one of the 6 specific brewing methods in the world since beer exists, that is since 13 millenia ago. It is one of the technological pathway among the 5 others which are :

The main merit of Dany Griffon's thesis is to have scientifically characterized one of the 6 brewing pathways practiced in the world. Brewers in Shaba (formerly Katanga) and Zambia are given a special status. They have offered humanity this certainly very ancient technological treasure and have kept it alive until today. Brewing historians will certainly be curious to know whether the same brewing technique is used elsewhere than in Africa (possibly in West Africa) and other parts of the world for traditional beers, using native plants with similar properties.

The second merit of this thesis results from his comparative study of traditional African beers. To determine the originality of Munkoyo among ancestral African beers, it was necessary to return to the fundamentals of brewing methods. With the data published at the time, Dany Griffon draws a vast panorama of the technologies of traditional African brewing. He shows the richness and diversity of these technologies. An indigenous brewing tradition has existed on the African continent for thousands of years. It is alive, it innovates, it has its own history. These results, which are now accepted, challenged many preconceived ideas in the 80s about Africa, a continent supposedly devoid of history. Without this thesis and similar works, Beer-Studies would not have emerged !

Lastly, Dany Griffon's thesis is part of a vast movement to rehabilitate traditional food technologies around the world. This movement took shape in the 1980s. Food specialists such as K. Steinkraus, C. Morris, J. Darby or A. Rose, among many others, conducted field research to study the qualities of traditional fermented foods and beverages. These researchers went to Africa, India, Asia and South America. They have shown that these foods and beverages, including beer, provide many nutritional benefits that industrial products no longer offer. Moreover, the mastery of technical processes enables local populations to control and improve their diet without depending on global industrial circuits or financial markets speculating on food raw materials.

Dany Griffon's research on munkoyo also proposes to develop this brewing technique without depriving the local brewers of their know-how and economic networks. In this respect, the munkoyo is an exemplary case of rehabilitation of a traditional beer. In Africa, as elsewhere, these traditional beers have long been ignored or despised by the industrial breweries of European origin. Here again, the historical research carried out by Beer-Studies only extends and amplifies on a global scale a project for the rehabilitation of traditional beers that was set up several decades ago by researchers around the world.

After Clément Delaude's reference book published in 1993 by Editions A. Degive " Munkoyo, les boissons fermentées africaines ", another publication revived the subject in 2013 and showed the advantages of the munkoyo technique (plant and beer)[2].

Since then, a recent research published in 2019 has studied the microbial diversity and aroma coompounds found in the Munkoyo-type beers[3].