The fundamental technical constraints imposed on the brewer, whatever his era and culture, can be summed up in this formula: transforming starch into an alcoholic fermented liquid. 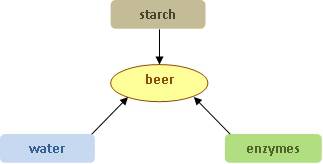 Starch refers here to all possible vegetable sources of starch, those that man has been obtaining for millennia as a farmer (cereals, grasses), horticulturist (replanting tubers: manioc, potato, yam, taro, etc.) or gatherer (dried fruit, starchy marrow from certain trees, various seeds, etc.). We do not know of a single source of starch that has not been transformed into beer, at a certain time and in a certain social context, since the very beginning of the beer brewing.

The enzymes are amylases and glycolases. Amylases hydrolyse starch into simple sugars. Glycolases degrade simple sugars into alcohol and carbon dioxide (CO2). Amylases are found in germinated grains, human or animal saliva, certain strains of moulds and in the tissue of certain plants. Glycolases are only found in certain yeasts of the genus Saccahromyces. The metabolism of these yeasts in anaerobic conditions is responsible for the conversion of sugars in the medium into ethanol.

Ultimately, the beer brewing is always a matter of biochemical activity. Even the purely chemical route of acid hydrolysis of starch is nevertheless concluded by alcoholic fermentation, and therefore enzymatic intervention via the yeasts, whether wild or cultivated.

Water. Before acting as a liquid to make a beverage, water hydrates the starch to activate enzymatic reactions. Plants generally store raw starch in a dry state, precisely because the absence of free water creates an abiotic environment. Starch, the energy stored substance of plants, is thus protected from microorganisms and chemical reactions[1]. Without water, the starch + amylase couple would be inert.

The triad " starch + water + enzymes " is fundamental. It is the brewer's technological basis. In the same way, alcoholic fermentation is only triggered if the triplet " sugars + water + enzymes" is joined together (yeast metabolism).

This technological guide places all beers on the same level: ancient or modern, Asian, African, Amerindian or European, they are all worthy of entering the big family. It therefore covers a wider range of types of beer than the usual brewing manuals entirely devoted to the production of barley or wheat-based beers by the malting method.

[1] Noteworthy exception: the tubers (manioc, yam, sweet potato, taro, etc.) are naturally hydrated. Some varieties of cassava known as "bitter" are even spongy in texture. In order not to rot in the ground, the tubers of this cassava are loaded with cyanogenic substances that are hostile to the development of microorganisms. The women brewers eliminate these toxic chemical compounds by water retting or cooking.
There' s nothing to stop mankind in its quest for starch to make beer!