The brewery ratios of the Chinese system

Brewing ratios in Dunhuang in the 10th century.

This file is amazing in many ways.

It provides the annual accounts of long-established Buddhist communities in the oasis of Dunhuang (Gansu province, northwest China). These accounts of grain, flour, oil, textiles and other products show that beer is central to the management and daily life of these religious communities. The details given by some accounts enable us to calculate several brewing ratios (volume of grain brewed in relation to each individual).  These ratios, a rough measure of beer density, vary according to people's social status.

These accounting records date from the 10th century, a troublesome period between the Tang (618-917) and Song (960-1279) dynasties, on the western border of China. Dunhuang is located on the north-eastern edge of the great Tarim basin. The region, crossed by the Silk Road, has maintained permanent economic and cultural exchanges between sedentary Sinicized populations and nomadic or urbanized populations of Central Asia, Mongolia and the Tibetan plateau.

These documents reveal some astonishing facts.

The Buddhist texts, the Vinaya Pittaka notably, forbid fermented beverages for those who have found refuge in the Buddha's Path. The Buddhist communities of Dunhuang, where religious and lay people mix, consume them widely, including monks, nuns and senior religious leaders. They drink beer (jiu, 酒 ) made mainly from millet, or barley and wheat, brewed using the Asian amylolytic ferments (beer starters) method (qu, 麴 ).

There were many opportunities to drink: collective work for the service of the sanctuaries, religious or secular festivals, meetings of the college of monks to close the annual accounts of the monasteries, collective meals, payments in kind to those who worked for the nuns or monks, etc. The accounting documents hide nothing of the circumstances that justify the expenditure of grain by the monasteries for brewing or having beer brewed. We learn in passing that lay female or male brewers made a lucrative trade in beer. The local beer production has its origins beyond the Buddhist monasteries of the region.

The notes given with the detailed or annual accounts open up an unprecedented insight into the daily life, social structures and customs of the communities of Dunhuang. These grain farmers live according to the pace of the agricultural seasons, and drink beer, the exclusive fermented beverage of the Dunhuang area[1]. Semi-nomadic pastoralists living in the surrounding regions, Uighurs, Mongols, Tibetans, Qarakhanids of Turkish origin, occasionally share the same pleasures with beer. This observation calls into question the usual dividing line drawn between beer-drinking cereal farmers and fermented milk-drinking pastoralists in Central Asia.

These data are of great significance for the history of beer, which often lacks concrete data. The Dunhuang accounts are replete with practical information: brewing methods, treatment of beer ferments and spent grains or dregs, size of a beer jar, daily beer ration, social scale translated into volume of grain/person, beer trade, link between beer and Buddhist festivals, etc.

The rich file about beer in Dunhuang is discussed in its entirety elsewhere. Here we only deal with the logic of the brewing ratios.

THE ANNUAL ACCOUNTS OF BUDDHIST MONASTERIES.

For the most part, these documents record the grain receipts and expenditures for the twenty or so monasteries in Dunhuang. The surviving documents concern one of the main monasteries, the Pure Land Monastery (Jingtu si). The annual accounts, which are complete for the years 924 and 930, make it possible to evaluate both the reserves and the expenditure of grain.

In 939, the Jingtu monastery consumed 56 piculs (33.6 hl) of grain for beer during a year of major construction work, which resulted in higher beer consumption. It remains in the same range / total volume of grain for food.

The partial accounts of the other monasteries offer similar figures (Trombert 1999, 136).

The staff of the monasteries is also modest: 10 to 20 monks or nuns per religious establishment. A large meeting to close the annual accounts in 932 gathered only 18 signatories in Jingtu. The majority of beer drinkers were lay people working for the monks in teams of 5 to 10 people. The great Buddhist celebrations required the work of craftsmen to repair the statues, banners or carts for the processions (Trombert 1996; Wang-Toutain 1996). The monasteries then devote more grain to beer for the preparation and conduct of these ceremonies.

THE DAY-TO-DAY ACCOUNTS OF BUDDHIST MONASTERIES.

The day-to-day accounts that provide brewing ratios (Trombert 1999, 169). All volumes are converted to litres :

For the closing of the accounts of the year 930 at Jingtu Monastery, « 90 litres of millet to buy beer day after day for the assembly of accounts [presented by] Yuanda » (roll P. 2049 col. 326). The expenditure of 90 litres of grain ground into flour for the same meeting states that it lasted 5 days. The signatories are 18: Yuanda, 15 monks bursars and 2 high officials of the local clergy.

For the next day's banquet following this closing of accounts « 210 litres of wheat/barley were crushed to make beer for the monks' banquet held for the 2nd year's accounts assembly » (P. 2049 col. 194). It can be inferred that this banquet was attended by approximately 210 Buddhist monks and dignitaries.

The accounts that provide brewing ratios for the stonecutters (Trombert 1999, 170). One craftsman employed 5 stonecutters for 10 days on behalf of the monastery. 18 litres of flour/day, one sheep for the 10 days and 6 litres of grain (millet?) for beer/day. 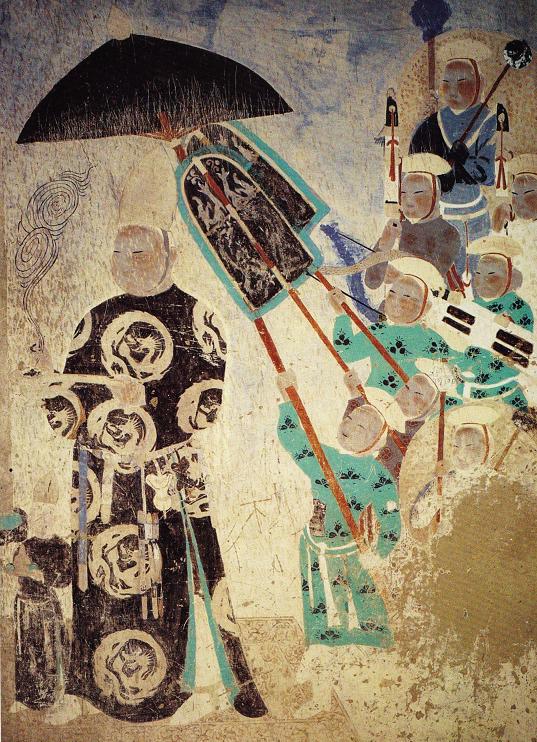 Éric Trombert (1999, 170) mentions the expenditure on beer offered to the Uighur emissaries received in Dunhuang during a month in the spring of 887. Each received the equivalent of 1.5 litres of grain per day in the form of beer and up to 3 litres per day on reception days.

Eric Trombert (1996, 64) has also listed the grain rations for beer and flour distributed to the bearers of the Buddha statues during the Dunhuang processions. Based on a daily flour ration of 1 sheng (0.6 litre), the number of bearers is calculated and then related to the millet rations for beer. The quota of grain for beer for the porters is between 1.2 and 0.9 litres depending on the year (table below).

The data analysed by E. Trombert make it possible to calculate the share of grain given to nuns for their beer in the course of collective meals.

THE BEER RATIO BY SOCIAL CLASSES IN DUNHUANG.

The daily flour rations for peasants and male or female serfs used as monk's or nun's servants are listed below. They relate to their 3 meals. We have no correlation with the grain used to brew their beer, if such rations ever existed.These lowest social categories probably had to divert grain from their food rations to brew their own beer.

The grain quotas for beer do not seem to vary much between social categories, apart for political emissaries and serfs, each at one end of the social hierarchy.

However, these figures should be handled with caution.

Domestic and commercial brewing (taverns and public sale of beer) are not included in the accounts of the Buddhist monasteries. Servants, gardeners and peasants in their service may brew for themselves or barter beer for grain with professional brewers. The monasteries themselves call on the latter when they need to procure larger volumes of beer for certain religious events (Trombert 1999, 137-141).

The quality of the beer depends on the quality of the grain.  The 'standard' beer is based on millet. An apparently higher quality is brewed with a barley/wheat mixture, or with wheat only (Trombert 1999, 151, 177-180). The use of more or less hulled grain, especially millet, affects the calculation of ratios depending on whether the volume of grain is that of the raw grain or the grist of already de-hulled grain. The documents do not provide these details. By uniformly applying a ration of 1 sheng (0.6 l) /meal regardless of social category, we have erased the problems of the quality of the grains used for meals or for brewing beer.

Lastly, the amylolytic ferment technique (qu) used in Dunhuang does not change the way in which one can estimate the amount of grain (hulled or not) allocated to each one for the beer he or she will drink. However, this brewing method implies that the volume and density of the beer depend on the actual dilution of the fermented and strained grain mass at the time of drinking (note [2]).

This issue becomes critical when the texts refer to the delivery of beer jars. Their capacity can be estimated: 40 to 60 litres depending on the case. But what do they contain? A more or less liquefied mass of fermented grain or an already filtered beer? The specific management of spent grain, the solid residue of the brewing process, suggests that these jars are filled with strained beer, the alcoholic liquid obtained after dilution/filtration of the fermented grain mass.

Is there a range of grain to beer ratios in Dunhuang according to social categories? It is apparent when comparing the volume of grain brewed for the Uyghur emissaries and that given to the craftsmen or bearers. Nevertheless, this range does not show the amplitude observed in Mesopotamia or Egypt in the 2nd millennium B.C., during which the beer brewing ratios shift up by a factor of 1 to 3 from the lowest to the highest ranks of the social hierarchy[3]. If the grid of grain for beer/person is given a social value, we can see that the community of Dunhuang shows a more "egalitarian" pattern, provided that our sample of texts is representative of a society beyond the Dunhuang Buddhist community alone.

[1] About 1000 km to the west, the vineyards and wines of Kutcha were famous at that time. Kutcha is one of the oasis towns on the northern edge of the Tarim basin, capital of the Tokarian kingdom of Kuch, about which the Chinese monk Xuanzang, who travelled to India in the summer of 629 to study Buddhism, wrote: « This country yielded millet, wheat, rice, grapes, pomegrenates, and plenty of pears, plums, peaches, and apricots. It produced also gold, copper, iron, lead,  and tin. » (Watters Thomas, On Yuan Chwang's Travels in India  AD 629-645, 1904, reprint 1996 p. 59).

[2] Jiu beer is brewed in a semi-solid medium. The ratio between the volume of fermented grain and the beer obtained after dilution(s) of this fermented mass is highly flexible. It depends in fact on the drinking manners. The guests gathered around the beer jar decide on the degree of dilution when drinking and adding more or less water to the brew. This is true if the jiu beer has not already been diluted and filtered when the jar is filled. Jiu can refer to two successive states of beer: semi-solid when fermenting, and liquid when drunk.

[3] This means 1 to 3 times, sometimes 4 times, more grain to brew the same volume of beer.