The brewery and the early empires servicing.

The brewery and the early empires servicing.

Empires are multicultural, multi-ethnic, multi-religious and centralising through political construction. The imperial edifice is superimposed on existing monarchical or clan structures. It controls them, sucks up their wealth, mobilises armies, without necessarily profoundly modifying their mores and local customs. Within an empire, the production and consumption of beer are organised in a new economic and political framework compared to that of the more homogenous kingdoms and princedoms that have preceded an imperial management of the beer brewing.

As a result, a part of an empire can consume beer according to the tradition inherited from the conquered kingdom. A neighbouring region may refrain from it or prefer other fermented beverages. A new social stratification is superimposed on the geographical patchwork and territorial customs. Within the former empires, one social class, one ethnic group, one caste may drink beer, another may not.

We review these highly contrasting and relatively complex historical situations for the empires of antiquity that have been sufficiently documented. From one empire to another, certain common features emerge as to the influence of imperial structures and policies on the development of brewing in the world. These empires cover a period between the 4th century BC (India, China) until the dawn of the 16th century (collapse of the Inca empire).

The brewery is generally considered by an imperial administration as a source of financial incomes. The empire delegates the direct management of grains and beverages to the provincial or local structure. In other words, the imperial administration superimposes itself on the existing regional economic structures in order to extract wealth from them. This wealth is no longer expressed in stocks of grain and beverages, but in sums of money or gold that accrue to the imperial treasury. An imperial authority creates its currency, unifies the accounting systems and units of weights and measures inherited from the conquered kingdoms, controls local trade and stimulates the great continental and maritime trade.

In this new economic context, the brewery is of interest to the imperial power insofar as the local beer trade (grain processing, taverns, breweries) becomes a source of taxes, duties and multiple tolls. On the other hand, large-scale trade and the displacement of populations within an empire, sometimes on a large scale, modify the map of beer brewing techniques and promote their diffusion. In the long term, these two developments have had opposite effects. On the one hand, the fixation, or even conservatism, of certain local brewing traditions, and on the other hand, the large-scale unification of other brewing techniques or cosmopolitan ways of drinking beer.

Ultimately, every empire must sooner or later face the large-scale management of grain and food resources. An imperial power is based on its ability to store huge quantities of grain to feed armies and the overwhelming imperial administration, or to cope with crop failures and famine. The production of beer then raises the crucial question of its usefulness (making a healthy beverage) or its harm to the general well-being (wasting the grain harvests devoted to the feeding of the subservient peoples).

Finally, the imperial authority does not escape religious questions when these are the basis of the unity of its empire. Alcoholic drunkenness, seen from the point of view of public morality, leads it to legislate. As beer was the main fermented beverage throughout the world in ancient times, these imperial policies have closely affected the historical development of the brewery on all continents.

Beyond these broad outlines, the conduct and history of each empire depends on its cultural area. We have chosen 6 examples to illustrate 6 different issues:

The Maurya empire in India (320 to 185 BC) : control and fiscal use of the beer trade.
The Han Empire in China (206 BC to 220 AD) : technical evolution of the brewery.
The Western Roman Empire (27 BC to 476) : competition between wine and beer.
The Carolingian Empire in Western Europe (800 to 988) : beer and Christianisation (brewing of beer by and for the abbeys).
The Mongol empire in Asia (1206 to 1294) : tolerance and diversity of the fermented beverages.
The Inca Empire in South America (1438 to 1533) : strategic control of the brewery on the roads of the Andes. 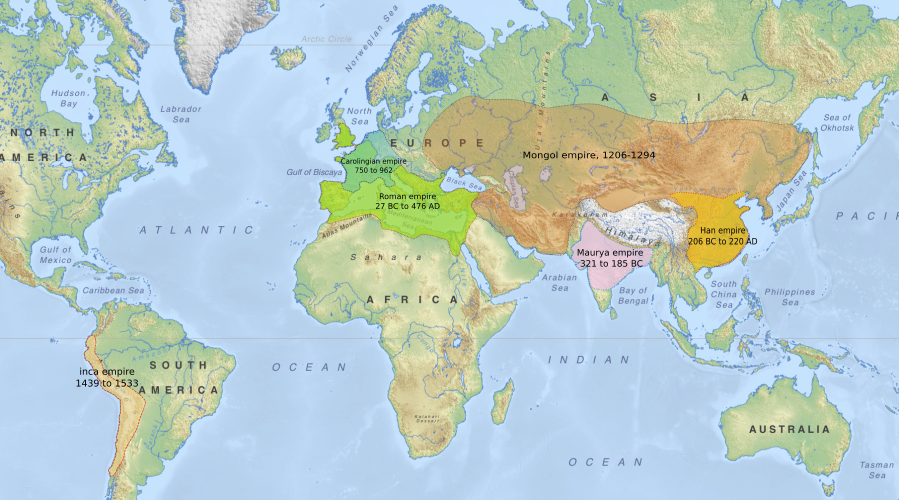 Some empires and their control of the beer brewing and trade.

Other empires have emerged in the course of history. Each has highlighted the question of the relationship between brewing and the imperial structures, from political, economic or technical points of view. Here are a few illustrations.

The Chinese empire under the Tang (618-907) and Song (960-1279) dynasties had to settle the question of the consumption of fermented beverages, mainly beer, by its own literate elites in charge of managing the empire.

The Ottoman Empire (1299-1923) had to constantly legislate on the same issue, in very different religious and multicultural contexts among its populations. It entrusted its local governors with the task of knowing and controlling regional customs. As far as fermented beverages are concerned, the rules are not the same in Egypt, the Maghreb, Anatolia, Mesopotamia, on the shores of the Black Sea or in the Balkans, all imperial provinces of the Great Gate.

The European colonial empires encountered a new situation. Bearers of a brewing tradition born of the industrial revolution at the beginning of the 19th century, they found in their colonies other very ancient traditions that were completely integrated into the ways of life of the colonised peoples. The confrontation of these traditions opens a new chapter in the history of beer. European beers meet the beers that the colonials call "indigenous beers". Although the general policy of the modern times colonial powers stays the same compare to their ancient counterparts (withdraw and maximise wealth to enrich their respective metropolitan mainlands), the local situations and the reactions of the colonised peoples vary from one continent to another, from one people to another. The latter either rejected the Western beers, adopted these new beers synonymous with social reclassification, or maintained the status quo. But after several centuries, "indigenous beers" have almost disappeared from the world landscape to the point where they are now considered exotic or tourist relics[1].

The rise, decline or transformation of brewing traditions in modern empires will be the subject of studies proposed by Beer-Studies. The management of these modern empires signicantly differs from that of the early empires.

[1] Almost all the inhabitants of the planet are nowadays unaware of the existence of these "indigenous beers", or look upon them with disdain and mistrust. People rave in front of the pyramids of Egypt or the Great Wall of China, ignoring the fermented beverages that were drunk by those who built them.