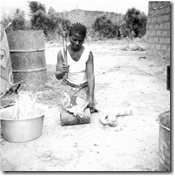 Defibering the Munkoyo roots in the village of Luambo, 1973.
Photo Dany Griffon.

A note written by A. Poot in 1954 and entitled: « Le Munkoyo, boisson des indigènes Bapende (Katanga) » (Munkoyo, beverage of the indigenous Bapende (Katanga)) seems to be the first publication concerning the use of the Munkoyo roots to make a fermented beverage.

This note was presented by M.W. Robijns to the members of the Royal Belgian Colonial Institute in 1954 and published the same year in the Bulletin n° XXV des Séances de l'Institut Royal Colonial Belge.

A. Poot points out, however, that the roots used are a species of the genus Eminia, created by Taubert in 1891 and that the first botanical description of this species was made by E. de Wildeman, in his " Etudes sur la flore du Katanga " which can be found in Annales du Musée du Congo, botanique, série IV, fascicule III, pages 198-199, Brussels, January 1903.

One has to wait until 1959 and the work of G. Bernier and R. Bouillienne to find written trace of the roots of Eminia and of the preparations of the beer Munkoyo made with these roots.

In 1961, Bernier and Lambrecht report that Thomson refers to two dietary surveys carried out in Zambia in 1954 in which the consumption of a beer « Munkoyo » is mentioned as part of the diet of the local population.

The bibliography no longer mentions any written trace of Munkoyo, until Dany Griffon in 1973 proposed to undertake a cooperative research project to deepen the knowledge of this traditional beer.

Trained as a brewing engineer, Dany Griffon, who then worked as a civil cooperant at the CRIAC "Centre de Recherche Industrielle en Afrique Centrale" in Lubumbashi, proposed to deepen research with the aim of valorising local traditional know-how and producing a beverage of satisfactory organoleptic and microbiological quality.

Dany Griffon seeks scientific support and obtains the agreement of Professor Metche at the University of Nancy to supervise a doctoral work on the subject.

The idea of setting up an innovative project, responding to local consumption habits and making it possible to exploit the remarkable enzymatic properties of the roots of this common plant growing in the African open forest was also enthusiastically welcomed by the Zairian supervisory authorities at the time, by the French Ministry of Cooperation and by the UNIDO (United Nations Industrial Development Organisation). The project took shape. The UNIDO agreed to finance a pilot agro-food workshop to give a tangible form to the project. 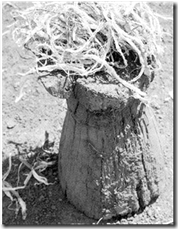 In 1975, the plans for the construction of the pilot workshop and the technical data sheets to characterise the necessary equipment were drawn up.

The idea of an organised cultivation of the Munkoyo plant had attracted the interest of the Zairian authorities at the time who saw a possibility of reducing the malt imports.

The maltsters and brewers were much more reserved, even hostile to any industrial development. Locally, the mistrust of the Munkoyo manufacturers and root sellers who feared losing their "livelihood" was also quite significant.

Work began in 1976 on fitting out the centre, which became the IRS (Institut de la recherche scientifique - Lubumbashi centre), to accommodate the pilot line, and the first pilot equipment arrived.

Called to other functions, Dany Griffon left Zaire at the end of 1976 and settled in Montpellier.

A few months later the "paras jumped on Kolwezi".

The project did not survive the political and economic upheavals that this region of Africa has experienced since 1977. First the French Cooperation and then UNIDO gradually withdrew. The Lubumbashi Research Centre, renamed CRAA (Centre de Recherche Agroalimentaire) became a little more isolated and did not have the means to support the project and finalise it.

In 1982, Dany Griffon also resumed new research work within the GERDAT[1] in Montpellier. To bring them into phase with the concerns of his institution's time, he oriented them towards "technological alternatives". He presented a research project on the saccharification of cassava starches to the DGRST[2] for funding. Two approaches are proposed: the first involves prior malting of sorghum, as in the manufacture of " dolo " in West Africa, and the second uses enzymes from the fibers of the Munkoyo roots.

This project, one of the very first research projects validated by GERDAT at the time, (which became CIRAD in 1985[3]) for the agricultural and food technology sector, was then out of the usual and sacrosanct tropical agronomic research.

In October 1985, the results acquired, supplemented by those previously obtained in Lubumbashi and Nancy, enabled him to defend his thesis. Hervé Bichat, Director General of CIRAD and Jean-Paul Hébert, his faithful friend, were invited by Professor Metche to be members of the jury.

Since then, the Munkoyo has known only a few rare writings. That of Clément Delaude published in 1993 by Editions A. Degive " Munkoyo, les boissons fermentées africaines " is a landmark and reference.

The subject remains topical. A recent bibliographical synthesis published in 2013 by BASE (Biotechnology Agronomy Society Environment) is entitled: " Munkoyo: roots, as potential sources of amylolytic enzymes and a traditional fermented beverage". This publication associates the Yangambi Faculty Institute of Agricultural Sciences (Department of Chemistry and Agricultural Industries of Kisangani in D.R. Congo) and the University of Liège - Gembloux Agro-Bio Tech. (Unit of Bio-industries. Centre Wallon de Biologie Industrielle (CWBI)).

May the online publication of my thesis by Beer-Studies encourage researchers and entrepreneurs to pursue the adventure of Munkoyo.