The royal dynasties Shang and Zhou dominated China from 1570 to 1046 and 1045 to 256 BC respectively. The Shang dynasty emerges from the mythical times attributed to the Xia dynasty (2070-1570) which precedes it in the Official Annals (Shiji and Bamboo Annals). The dynasty of the Zhou succeeds it. It establishes one of the longest reign of Chinese history, before sinking into chaos and giving way to the Han which will form the first unified Chinese empire (Brewery under the Han).

Ancient China is characterised by the abundance and wide range of sources of starch for brewing.

According to the oldest texts and the research of archaeobotanists, 6 cultivated seeds were fundamental for the Chinese in antiquity. The term "seed" (ku) includes cereals and vegetables: 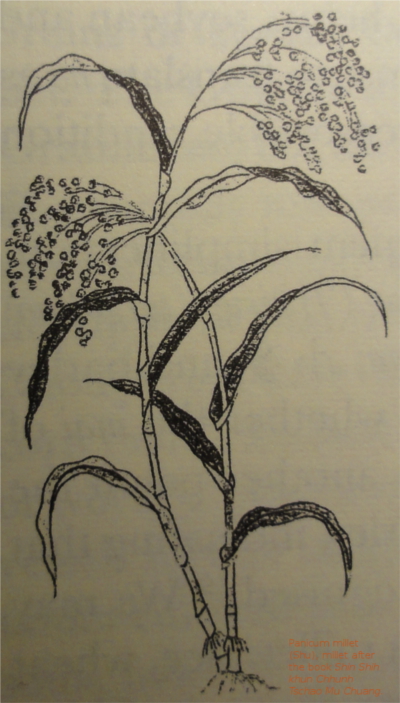 shu = broomcorn millet or common millet (Panicum miliaceum), grass of the Poaces (broomcorn/proso millet). It seems to be dedicated to the beer brewing. The cultivation of millets began in Northern China 6-7000 years ago. The term The term Liang appears under the Zhou and seems to refer to another variety of millet. A glutinous millet is also used by Chinese brewing in ancient times and adapted to the brewing technique based on amylolytic ferments. 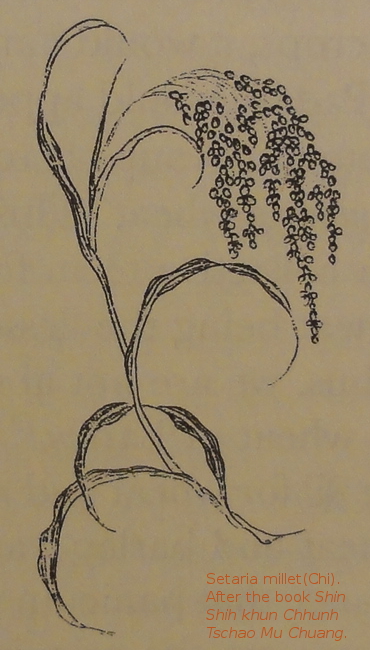 chi = foxtail millet or petit mil (Setaria italica), grass of the Poaceae family. It seems more dedicated to cooking than to brewing.The discovery of grains of S. italica at the site of Pan-P'o (Banpo) near Xi'an (Shaanxi) dated between 4773 and 4294 B.C. demonstrates the predominance of millet in northern China since the beginning of the period of Yangshao, 7000 years ago[1].

tao = rice (Oriza sativa). Domesticated in the Yangtze Valley since 11.500 years. It has been used to brew various kinds of rice beer since the highest Chinese antiquity in the south of the country. Its traces were found at Jiahu around 7000 BC in an archaeological context associated with the making of a complex kind of beer. Its role in the ancient development of Chinese beer brewing is therefore certain and demonstrated, like that of millet. 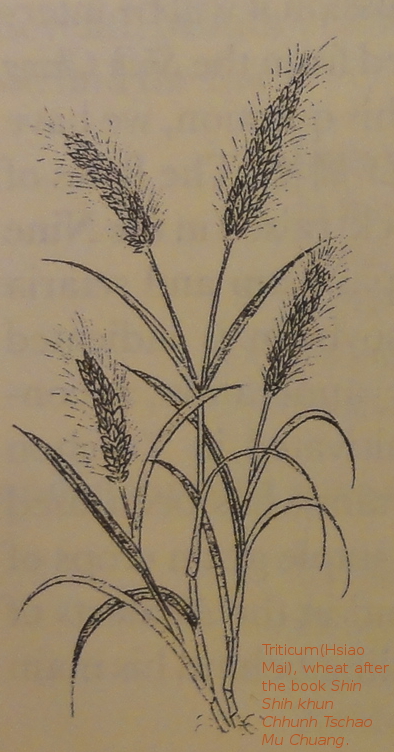 mai = cereal grains in general. ta (large) may refers to barley (Hordeum vulgare) and hsiao (small) may denotes wheat (Triticum turgidum). Barley and wheat are used to brew beer. The dominant technique is malting, at least until the Han, a period which heralds the gradual decline of these two cereals in the composition of traditional Chinese beers, to the almost exclusive benefit of millets and rice.

ma hemp (Cannabis sativa) used very early for both its seeds (female plant) and its fibres (male plant). Towards the 6th century, food hemp recedes in front of cereals and becomes a secondary plant. But it is still used to make brewing ferments, at least as a source of amylolytic moulds and as a starch carrier to cultivate the fungi and moulds that make up the brewing ferments typical of the Chinese traditionnal brewing technology. 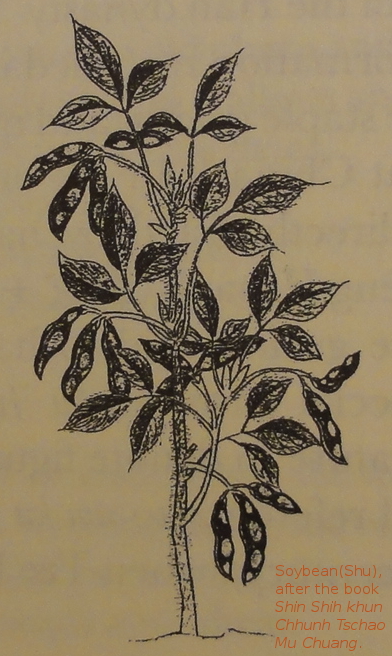 shu = soya (Glycine max). It is not a cereal but a vegetable. Unlike hemp, soya has become increasingly important over time. It has no direct role in brewing. However, fermented soy sauces use a technology close to that of beer brewing, namely the use of ferments cultivated with fungi.

We should also mention beans (shu) and taros (yü) Colocasia esculentum, grown in the south of the country. These starch-rich plants were used in beer brewing from an early age, either as a source of saccharifiable starch or as a nutrient carrier for the cultivation of amylolytic moulds for beer ferments.

The literary terminology of millets does not reflect their original botanical diversity. Same remark for rice: only one generic term (tao) but dozens of rice varieties adapted to brewing and cooking uses. Ancient China is characterised by the abundance and variety of starch sources for beer brewing.

Chinese brewery?
By Chinese brewery at the very remote time of the Shang and the Zhou, we refer to everything related to beer on a territory which covers roughly the present China, minus Tibet.
However, 3000 years ago, the political Shang and Zhou entities control barely 10% of what forms modern China, essentially the great coastal plain on either side of the Huang-he (yellow river) and its tributaries.
Non-Sinise peoples live in the North, East and South. Their customs and cultures compete with what will become the core of the Han culture. The "Chinese brewery" is so forth a virtual historical object.

To this list can be added the plants, starchy or not, used to make amylolytic ferments, a technique that China has greatly perfected since the Han dynasty (202 BC to 220 AD), without having the exclusivity of its principle among all the brewer peoples of Asia (Beer brewing pathway no. 3). The cooked substrate for growing amylolytic moulds are made from cereals, beans, starchy roots mixed with various leaves or flowers that carry these moulds in the wild state.

The Huang-he (yellow river) basin is agreed to be the border between two large geographical areas and two climatic zones. The North, with a marked winter, is the domain of millet and grasses. It is conducive to malting techniques. The South, more tropical, would have favoured rice growing, taro, starchy tubers, and consequently beer brewing using the amylolytic ferments. However, 5 to 4 thousand years ago, China's climate was hotter and more humid. The proto-historical picture of brewing in China cannot be summed up in this north-south division marked by the Huang-He basin.

[1] Chang Te-tzu 1983, The Origins and Early Culture of Cereals Grains and Food Legumes, in The Origins of Chinese Civilization, Ed. by David N. Keightley, p. 65.