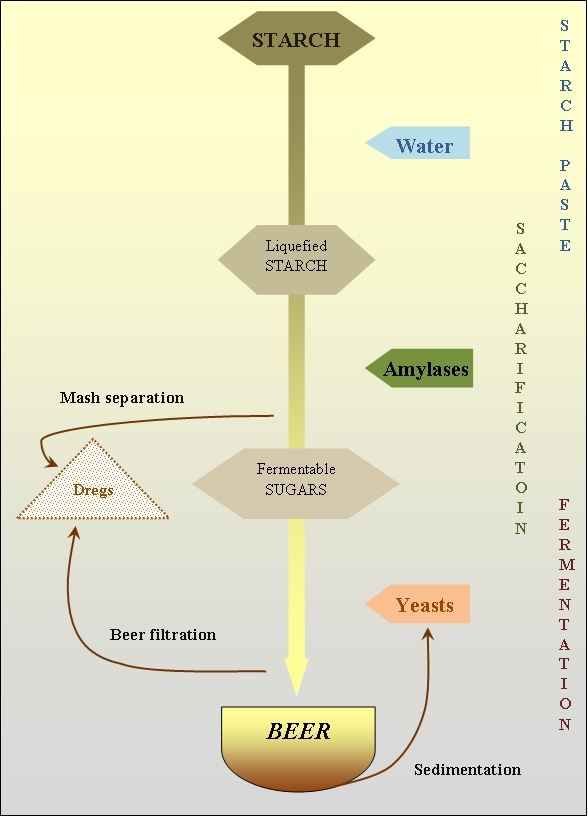 The starchy mush, a preparatory stage

The raw starch, either dry (grain albumen) or hydrated (tuber), consists of long branched chains of simple sugars (glucose, maltose). These microscopic strands are folded up, in their natural state, into the granules. In order for enzymes to convert these macromolecules into sugars (saccharification), the protein envelope of the granules must be destroyed, allowing the long chains to unfold, forming a thick paste.

The starch saccharification, the central stage of the brewing process

The long starch chains are split into simple sugars. Most are fermentable. This operation is under the control of amylases, a class of enzymes specialised in starch hydrolysis. These enzymes exist in saliva, some plants, moulds and mushrooms. They are also generated by the embryos of the germinating grains. They need water (hydrated phase), a suited temperature and pH.

Some brewing patterns separate the liquid part (wort) from the solid mass of the grain or tuber residues. The liquid is fermented, the solid remaining part is used as animal feed named dregs, that is spent grains.

Alcoholic fermentation of sugars, final and partial conversion to ethanol

The yeasts transform the sugars into ethanol and carbon dioxide through the metabolism of alcoholic fermentation. It takes place in the absence of oxygen. This final transformation is common to all fermented beverages. It operates on the wort (liquid) or a semi-liquid mass, depending on the brewing patterns. In the first case, the dried yeast sediment can be reused from brew to brew (optional). In the second case, the semi-liquid beer is filtered after fermentation. This is optional. The technical boundary between beer and fermented slurries is sometimes thin.

The Principles of Brewing.

This general technical canvas and its biochemical triplet (water+starch+enzyme) generate technical variants, depending on the origin of the starch, amylases (enzymes) and yeasts. The main processing phases are as follows:

This general diagram shows that the main technical variants of brewing concern the saccharification of the starch (operations 2 and 3), not the alcoholic fermentation. There are 6 methods in the world for saccharifying starch, whatever its source (cereals, tubers, starchy fruits, etc.).

We named them the "6 Brewing Paths".

It is fundamental to understand their coherence and their respective technical constraints. They have shaped the entire history of the brewery since its origin. They have been implemented by all the brewing peoples of the planet throughout the ages. They are not exclusive. Some cultures have adopted several methods to brew beer at the same time. Nor do these different brewing methods correspond to definitive cultural choices. Some parts of the world are more open or richer than others in terms of the number of different Brewing Paths used simultaneously.

The 6 Paths for Brewing would be more aptly named 6 Paths for Starch Saccharification. The different methods are primarily concerned with the way to convert starch into sugar, not with the alcoholic fermentation.

But in the brewing process, the relationship between starch saccharification and alcoholic fermentation is so central that the method chosen to convert starch into sugars has a direct impact on the fermentation process. You only have to compare two brewing patterns to understand this: that of Japanese sake and that of a European malt beer.

The traditional brewing of sake (Japanese rice beer) conducts saccharification and fermentation simultaneously, in the same vat and at the same time. The sugars ferment as soon as they are produced by the koji (a specific ferment of Rhizopus or Aspergillus molds) mixed with the moromi (a parboiled rice mass). This specific pattern is that of many traditional Asian or Amerindian beers.

The malt-based brewing proceeds in two stages: soaking of the crushed malt (mash) at controlled temperature (54° to 75°C, optimal 67°C) to saccharify the starch, filtration to obtain a sweet liquid (wort), then fermentation of this wort by adding yeast. This is the pattern of Western beers, Southern America beers, or African beers for the most part.