On the shores of the Mediterranean, Greeks and Latins are reputed to have kept beer in an inferior status compared to wine. Classical Greek texts mention beer (brutov or zuthos) as a fermented drink that cannot compete with wine. Beer is the beverage of the peoples surrounding the Greek world (Thracians, Egyptians, Anatolians) or that of the lower social classes, servants and slaves. It should be remembered that the cradle of democracy restricts the status of free citizen to only 20%-30% of its population. The other 70% are assigned to productive work, the most arduous or dangerous jobs. Slavery in the ancient Greek world is an essential economic component.The world of beer and the aristocratic world of wine seen by the Greek culture reflect a deep and irreducible social division. 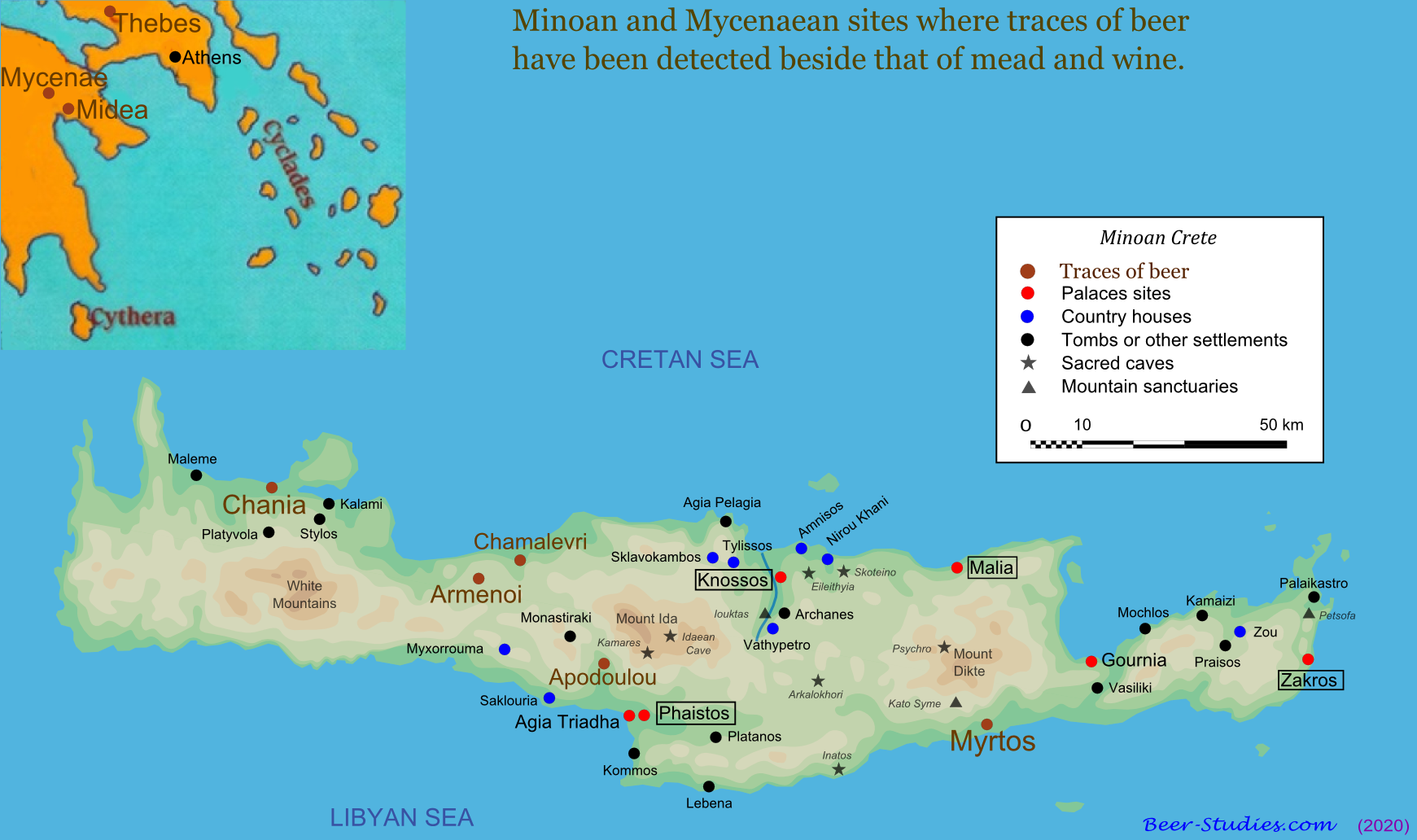 Before this classical Greek age of the 5-4th centuries, things were different. Around 900-800 B.C., the peoples of the Levant, Greece and Anatolia were certainly islands of wine-growing, but in a global world dedicated to beer. Oriental and Greek peoples consumed beer as well as wine. The cultural image of these two drinks is not yet differentiated. King Midas and his male and female guests drink beer during their banquets. A royal tomb from the ancient kingdom of Phrygia in Gordion (740-700 BC) has yielded solid residues of funerary drinks. Diagnosis: beer, mead and wine analysed in 1997 (McGovern).

If we once more go back in time, we are surprised to note that beer dominates the Minoan and Mycenaean worlds, albeit portrayed as wine civilisations. To discover this, archaeologists have resorted to the scientific analysis of the residues found in cups, jars or pots of modest manufacture. In other words, ordinary vessels used in everyday life, not the prestigious decorated vases found in palaces and presented by museums all over the world.

These biomolecular analyses of residues concern two different periods: the Minoan culture in Crete (2700-1200 BCE) and the Mycenian culture in continental Greece (1650-1100 BCE)[1].

For the Minoan period, archaeologists have detected wine, beer and mead in Crete, often mixed in the same vessels. They have found traces of honey and the chemical markers specific to the fermentation of grains or grapes, respectively calcium oxalate and tartaric acid salts.

On the continent, two Greek sites from the Mycenaean period, Thebes and Midea, provided evidence of beer use among the Greek populations between 1600 and 1000 BCE. Again, the fermented beverages detectable in cooking pots and jars are mixed: beer, mead and wine mixed, either because the vessels contained these beverages in rotation, or more probably because the production of these fermented beverages was not yet differentiated. Both the Mycenaeans and the Minoans allowed to ferment together all what was available: grains, honey and fruits, with resinous plants and aromatic herbs: cardamom, celery, coriander, cumin, fennel, mint, safflower, sesame (Tzedakis 1999, 130).

The photos in Figs. 8 and 9 show restored specimens similar to the analysed pottery that survived in the form of shards.

The rhyton discovered on the Mycenaean site of Midea west of the Megaron deserves a comment. It dates from 1370-1190 BCE (Tzedakis 1999, 171). Traces of barley beer and wine were found on the shard that made up its pierced base. The rhyton is invariably associated with the use of wine by the Hellenists, a reflex that is now debatable. The rhyton was used to pour libations on altars, hence its base pierced with a hole. In view of its use in rituals, the idea that the beer it contained came from a secular use must be dismissed. The officiants of the Mycenaean rituals therefore offered beer, alongside wine, or a mixed fermented drink half beer-half wine, probably during celebrations related to the cultivation of cereals and fertility rites. This discovery seriously challenges the classical imagery of Greek rituals systematically using wine as a sacred drink. The reality was less simplistic.