Result of your search [16 articles]

Mabi, from the Amerindian beer to the beer for slaves.

From the 17th century onwards, ships from Europe disembarked on the coasts with cargoes of poor people with the promise of easy fortune and a new existence. More often than not, the dream becomes a nightmare. Ill-prepared for the tropical climate, poorly fed, ill-equipped, ignorant of farming, hunting and fishing techniques, these first settlers faced a difficult life.

Many colonisations fail. Those that survive succeed thanks to the help of the Amerindians.

With the establishment of the slave system, the settlers called upon a servile workforce, accustomed to tropical climates but non-native, and therefore unable to flee to a hinterland populated by their own people. The Amerindians flee abuse and run away whenever they can to reach their villages and families. The slaves uprooted from Africa cannot, at least in the early decades of colonial plantations. Sometimes Amerindian communities welcomed and protected escaped slaves, afraid of the cruelty of the white man and aware that they would eventually and collectively share the same fate.

With the beginnings of the slavery system in the Caribbean islands, a paradoxical and shocking situation was created. The Amerindians, when reduced to the function of slaves, were deprived of their traditional beverages, cassava beers and sweet potato beers. The settlers reserve the privilege of drink these beers, while leaving the task of brewing them to Indian women, a skill they are recognised for. They know how to treat the toxic bitter cassava to rid it of its poison. They know how to brew the mabi-beer better than the settlers. The island of Barbados, colonised et exploited by the English, is an exemplary case in point.

In 1652, Heinrich Von Uchteritz[1] testifies to this new situation. Of German origin, he took part in England in the war of the Royalists against Cromwell as a mercenary. In the party of the defeated, he is deported to Barbados as a indentured servant. For several months, he lived in an almost servile condition and shared the existence of the Amerindian and black slaves in the English colony, and gives us details of the servile regime that other accounts do not mention at that time:

" The inhabitants and English obtain their livelihood and trade entirely from sugar, tobacco, ginger, and cotton which are produced in great quantities. Money is little employed and they trade only with the above mentioned goods; one is as dear to them as the other. Slaves must do all the work. They plant and hoe tobacco, ginger and sugar. Sugar cane grows in the fields almost like reeds and to more than a thumb's thickness in moist places. The cane is first crushed and is then boiled in a kettle. The best of the cane is pressed out and the remainder is given to the pigs as fodder. After the sugar has been pressed out and refined, they let it stand in the sun or in a warm place so that the remaining moisture is removed. What remains is then sugar. I had to sweep the plantation yard the first day; on another day I fed the pigs and thereafter I had to do the kind of work usually performed by the slaves. Our food was very bad and consisted only of roots. One such root called batatas [potato], is cooked in large pots and tastes almost like chestnuts. The other root is called cassava from which a small, but fruitless, tree grows. The cassava root is quite large. Before eating it must first be grated and the juice must be fully pressed out. Then it is pressed as flat as a cake, laid on top of glowing-coals, and is covered with coals so that it dries fully. The extracted water is pure poison. Cassava is the slaves' food. 12 They do not receive meat and there is none to be had except for limited quantities of pork which only the gentry can afford.

The gentry make a drink from the potato root. They put the root in a sack, soak it in water and mash it together. This is then poured into a stone crock where it ferments as other drinks do. Then they add sugar and lemon juice. This makes a pleasing and fine drink. Although wine and beer are imported from other countries, they are very expensive. The slaves, however, drink only common water with sugar and lemon juice. So much for their food and drink. "

The settlers modified the Amerindian process by adding cane sugar and lemon juice. The Amerindians add this sugar, to mask the acidity that occurs in potato beer after 2 or 3 days of fermentation. What changes with the Europeans are the proportions of sugar and the systematic nature of its addition before fermentation. The European taste favours more alcoholic drinks. The lemon juice gives the beer the acidity of cider that the English appreciate, unlike the Amerindians.

It should be noted that all the techniques and tools used by Amerindian women are now in the hands of black slaves (scraper, sieve, cassava press, cassava cooking sole), men or women depending on the nature of the work. 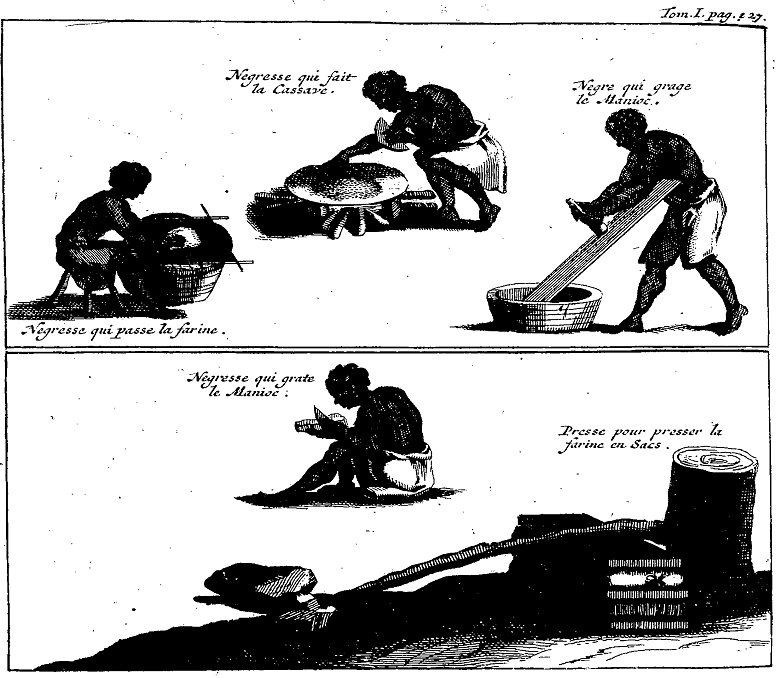 [1] Uchteritz Heinrich von 1652, A German Indentured Servant in Barbados in 1652: The account of Heinrich von Uchteritz. Edited and translated by Alexander Gunkel and Jerome S. Handler, Journal of the Barbados Museum and Historical Society, May 1970. " In the beginning of 1652, after we had been held prisoners in London for a quarter of a year, 1300 of us were sent on ships to the West Indian island of Barbados, which the English possessed. As far as I know no one returned except myself. This island lies in front of many other small islands. Its circumference is sixteen miles. Each of us was sold for eight hundred pounds of sugar. A count [graf] named Weitecker bought me along with nineteen others. This count was a Christian, born in England, who had one hundred Christians, one hundred Negroes, and one hundred Indians [wilde] as slaves." A GERMAN INDENPURED SERVANT IN BARBADOS in 1652.pdf

Read the 16 articles related to your tour