For the irrigated Mesopotamian agriculture in the 3rd millennium BC, observing the work of nature is not enough. An annual comput coordinates the collective tasks : clearing, irrigation, plowing, sowing, harvesting, threshing, transport. The distribution of water upstream of the fields and the anticipation of annual floods require a strong social organisation and one agricultural calendar to ensure the required coordination over the whole agricultural year. This kind of social organisation and timeline coordination must operate at a regional space scale because the large networks of canals extended over long distances : let's say 30 to 50 km around one city-state. Moreover, the agricultural year itself is punctuated by rituals and religious celebrations that mobilize the working and seek the help of deities of fertility and plants.

The agrarian calendar of Lagaš, a Mesopotamian city-state which has flourished in the middle of the 3rd millennium, expects few rituals accompanied by offerings of beer. In Mesopoatamia, the political power is but the state manager of the vast agricultural land given by the patron deity of the city. Hence, the palace is one of the main agrarian actors which organise the agrarian rituals throughout the year. The celebrations of the barley cycle are divided into four chronological sequences that coincide with four moments in the cultivation of this crop[1].

From 4th to 8th month (mid-July to mid-November), irrigated fields are plowed and then barley or wheat seeds are sowed. Prayers and offerings implore the good grain sprouting. The rites protect seeds from rodents, birds and insects, as well from the mold that threatens seeds and seedlings after controlled and repeated flooding of the fields. Offerings are brought to the temples and duly recorded by scribes working at shrines : sheep, various flours, dates and finally jars of beer. That beer is named beer-dida (KAŠ-DIDA) [2]. Neither the progress nor the content of these rites have survived. As unique indication, the ritual means "prayer-siskur offered for the field that eats something ". The beer offerings must nourish the earth (the soil divinities), which in turn lets the barley seeds grow. In the Sumer land, during spring, these rites are repeated at each stage of the  barley growing. They consist in libations of beer, as for the festival of sowing attested in the cities-states of Girsu and Umma during the Ur III period (see below). A contemporary document of the sargonic period (2340-2154 BC) from the city of Adad reported that nig-ra-ra cakes are delivered by the palace kitchen "to open the furrow "[3]. The nigara beer-cake or groat is in fact a brewing ingredient, as well as the malt or the Mesopotamian beer-bread (BAPPIR).

From 12th to 1st month of next year (mid-march to mid-april), the deities are receiving again various flour, dates and beer. According to the "Farmer's Instructions", these offerings joined with prayers prepare the mowing of grain ears. Here are the details given by one tablet from Umma: "Regular beer one (jar) of 15 liters, 4 liters of coarse flour, 10 liters of pea flour, 120 liters of eša(-flour), 21 liters of dates; for offerings with prayer to the Ukunuti field ..." [4].

On the 1st month (mid-April), prayers are addressed to mown field that has to be "bound" magically, so that it retains its powers and fertility. A maš-maš priest officiates, after counting the offered sheeps and jars of beer. The nature otf the offerings indicates the importance of ritual : beer, sheep, but also oils, perfumes, milk and (new?) barley.

On April-May, the fourth group rituals takes place on the threshing floor. The Farmer's Instructions are intended on one hand to impure barley (not cleaned), on the other hand to the pure grain conveyed to granaries. That time, ceremonial involves high ranking persons. On the threshing floor, the Queen, her substitute or a priestess, is symbolically walked on a ceremonial wooden sledge, covered with a canopy and pulled by oxen. The processional march of this tribulum[5] sheaves mimics the treading of the grain.

An old seal discovered at Arslantepe (Southeastern Anatolia) depicts such a scene[6]. The ritual of the ceremonial tribulum is a key moment in the agricultural cycle. Grains will move to the granaries and silos of the city. With clay, the precious chopped straw will compose the bricks of the walls and the utilitarian pottery. Mixed with animal excrement, it will provide an efficient fuel. The whole Mesopotamian material life depends on these clay bricks : houses, granaries, silos, wells, city-walls, palaces, temples. The first technical step of the brewing process with the grains of the new harvest occurs on the threshing floor. This place materializes the joyful chance to brew the fresh beer of the prosperous agricultural year. 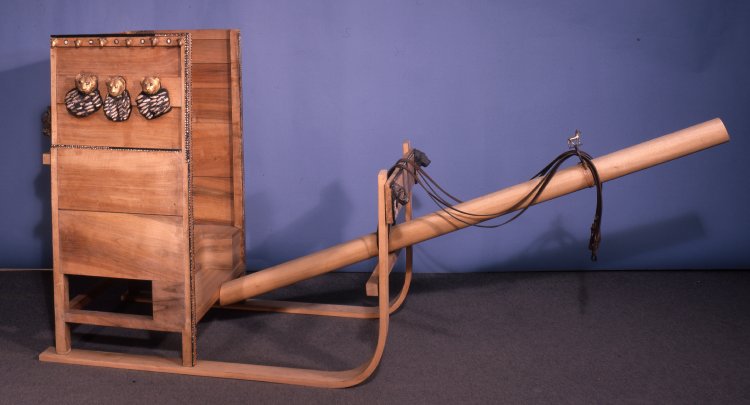 This tribulum becomes therefore a symbolic object of the powerful city and its agrarian rich hinterland. The richly decorated wooden sled discovered inside the tomb of Queen or priestess Pu-abi at Ur (a southern Mesopotamian city on the Persian Gulf banks) was a ceremonial tribulum pulled by oxen[7]. Dated from 2700-2600, this rare object refers to the functions of the deceased. It was chosen, with two sacrificed oxen, to accompany her in the death. This sled is associated with the threshing. But the threshing floor can also serve as a malting floor, which brings us back to beer. Each beating surface draws a circle of 5m in diameter up to 20 m for the largest[8], namely an average surface of ≈30 m2. It enables the sprouting and drying under sunshine of about 1200 liters of malt. At the beginning of the second millennium BC, a brewery archive excavated at Šubat-Enlil (Syria) and a set of beer accounts provided by a "grains service or office" at Chagar Bazar (Syria), both give accounts of malt coming from the threshing floor and delivered directly to a brewer or a brewing workshop.

[1] Tohru Maeada 1979, On the Agricultural Festivals in Sumer, Acta Sumerologica (Japon) : pp 19-31. Girsu, one city of the Lagaš kingdom, has left at least 2,000 administrative clay tablets. Some reveal the existence of agricultural festivals and the management of the religious offerings.

[4] Shin T. Kang 1973, Sumerian Economic Texts from the Umma Archive. Sumerian and Akkadian Cuneiform Texts in the Collection of the World Heritage Museum of the University of Illinois Vol II : 319

[5] The tribulum, an agrarian implement above all, is made of planks or reeds bound by leather straps and inlaid on its underside of flint blades (blades called "Canaanite"), inserted and retained by a mixture of bitumen and sand. Dragged by donkeys or oxen on the sheaves spread on the ground, it removes the grains from stalks and finely chops the remaining straw.